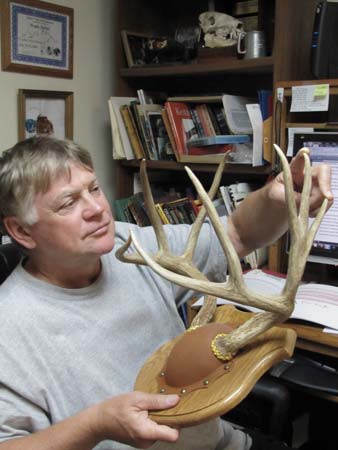 This buck was the one triple tine candidate I was waiting for. He made his visit on the last evening before the porkers showed up. The ranch owner had seen this buck on a number of occasions and called him the Turkey Foot buck. Note how the main beams touch at the tip.

Like nearly all the Lone Star bowhunts, this one was based over feeders. I had already seen deer and even a couple shooter bucks while on stand but never one close enough or at the right angle. It almost seemed like they knew that corn feeders come with bowhunters…dahaa. One evening a big old doe came in early and from 60 yards began to circle my perch in the live oak tree. I knew there was going to be trouble, and there was.

After the slow 360-degree walk she stopped directly downwind. Her nose went up as if she was reaching for an apple. Then she stomped her foot. I recognized this as the downhill slide it was. Eventually she snorted, raised the white flag and surrendered the feeder to some less vigilant deer.

On another evening at the same feeder, I watched a flock of 10-15 pigs blast in immediately after it went off. I say flock because they resembled a flock of ducks setting into a spread of decoys. They came in like a S.W.A.T. team. They were all coal black and racing for the prize. Dyson would have been proud at their efficiency. They vacuumed up every kernel of corn within 10 yards of the feeder and I sat there “unbaited” for the rest of the evening. I felt cheated. I should have shot one of the pesky pigs.

It was now next to the last evening on my Texas whitetail bowhunt. Things were slow at the sprawling live oak until 30-minutes before dark. Then two bucks made a showing in the mesquite, again slowly circling. They were very interested in the corn that had been flung out just moments before. One buck was a keeper. It had a unique triple tine on the left antler at the G2 that looked like a turkey track.

Then out in the distance I spotted the S.W.A.T. team homing in on my feeder. They were angling in like a corn seeking missiles. The nice buck I was watching faded off into the distance with his buddy. I’d lost this round to the pigs.

Have you ever wondered if those hogs that came to your feeder are really pushing the deer away? The answer is yes. Moreover, it is not conjecture. Some researchers at Auburn University and Connors State set up an interesting bit of science that may have answered the question. The researchers set up cameras at 896 baited corn feeder sites and took notes. Both whitetails and hogs were common on the property. Data with that kind of depth is hard to find.

Here is what they found after crunching the numbers. Wild pigs absolutely excluded whitetail deer from the sample sites. The amount of push they exerted on deer was enough to encourage you to bring lots of arrows and shoot pigs at your feeders. The research data revealed that visitation was down 49% for deer when pigs were present.

Whoa momma…that’s bad news. Wild pigs are viewed as pack of wolves to feeder deer. Now we have the science. How can you exclude hogs from the corn slingers? One idea is to install a hog fence around the corn feeders. I have seen this work on Robert Hogue’s whitetail lease where hogs are common. One of the issues is that hogs will put in overtime to get through that fence, so you’d better anchor it like you mean it.

Because I’ve always believed in 11:59, I was still sitting there in that live oak on the last night of my hunt. This night the hogs must have been preoccupied with something because the buck with the triple G2 came in just after the feeder startled me. Although I’m not a great shot with a bow at long distances I’m pretty lethal at 20 yards. He made the double mistake of not circling the feeder and then stepping into my zone. I’d out foxed the pigs at last. 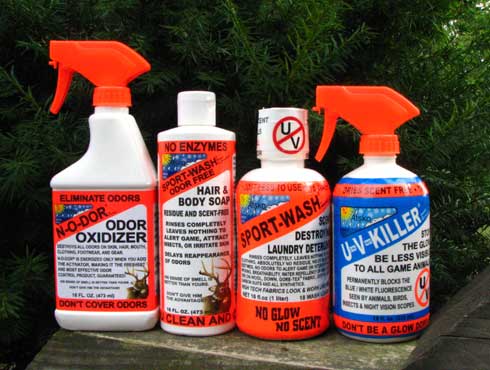 Bowhunters note: I recently hunted hogs with Robert Hogue at his Texas ranch. Every day, before I went to the stand I showered and used Sport-Wash Hair and Body Soap and then sprayed down with N-O-D-O-R oxidizer spray from Atsko Products. I wasn’t detected once…and I was sitting at one of those feeders the deer circle.

Want to stay undected? Be sure and use your Atsko.

How Old Is This Buck?

BHN Welcomes Bowjax to the Family.