How Far Is Too Far? Part I 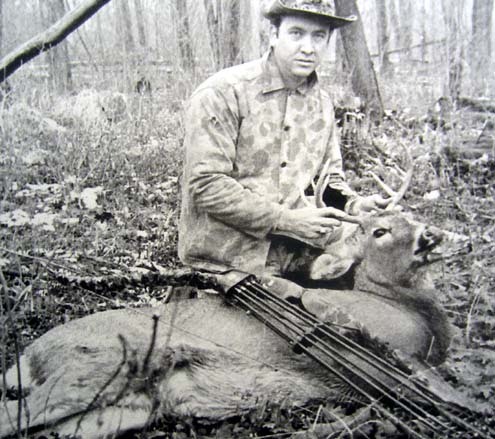 SHOOTING INSTINCTIVELY, I tagged this Michigan buck with one arrow at 40 yards on a late 1960s bowhunt. Competing in National Field Archery Association tournaments – with shots taken at up to 80 yards – prepared hunters for long-range shooting. Later I came to realize there’s a big difference between paper targets and flesh and blood animals.

MY BUDDY WAS STILL SNUGGLED inside his sleeping bag when I pushed through the tent flaps and blurted, “Want to help blood trail a buck I just shot?” That query brought Rudy out of his early morning slumber faster than any shrilling alarm clock could. Moments later we were leaving our soggy deer camp, hustling straight for the rye field where I’d arrowed a feeding 8-pointer shortly after the overnight storms ended.  I explained what had happened as we hiked.

“The rain had quit when I finally woke up and rolled out. You’d said you were sleeping in, so I slipped on my camo, grabbed my recurve, and took off. Figured deer might be moving after the all-night downpour. And sure enough, I almost walked smack into a nice buck when I rounded the bend at the field’s edge.

“Somehow he didn’t see or hear me. I stopped dead, pulled and nocked an arrow, then drew and released. He was perfectly broadside and my arrow hit just behind his shoulder. He boiled out of the field into the brush on the far side. The shot looked good all the way. Don’t think he’ll make it very far, but I figured you’d want to be in on the recovery.”

Rudy nodded and grunted. “How far was the shot?”

Hmmm. Good question. And until he asked I’d never given it a thought. After all, this was the mid-1960s when every bowhunter shot a recurve or longbow, mostly instinctively, although a few guys in the local archery club used sights for field archery competition. Me? I simply picked a spot where I wanted my arrow to hit, then released when it felt right. Believe it or not, thousands of shots taken during countless hours of practice resulted in more accuracy than most modern bowhunters might imagine.

As it turned out, when I later paced off the distance from the toilet paper square I’d hung on a trailside bush where I’d stood, to the cut hair, blood, and muddy hoof marks in the rye field, I was surprised to discover the actual distance was 64 yards.

I OFTEN USE THAT ANECDOTE in hunting seminars to point out the beauty of pure instinctive shooting. It’s what helped make men like Howard Hill and Fred Bear bowhunting legends. And in all honestly, it’s also what makes me rue the day I first put sights on my compound bows and needed to estimate yardages in order to shoot accurately.

Like Pope and Young Club founder Glenn St. Charles, who readily admitted his difficulty with shooting compounds instinctively, I also tried but failed miserably. When my wheeled bows’ string tension relaxed before reaching full draw, my focus on the spot I wanted to hit was thrown off kilter because the lighter pull made me want to elevate my bow arm. Glenn noted a similar problem. In short, our brains couldn’t make the adjustment necessary to maintain required focus. Our instinctive aim-draw-release shooting style was to blame. Conversely, my old pal Judd Cooney, a noted hunting guide, wildlife photographer, and outdoor writer, can pick up most any compound and begin shooting it accurately without sight pins after only a couple of test shots. His shooting style involves a firm anchor and aiming before the release; mine allows a quick release once my fingers touch my corner-of-the-mouth anchor.

Regardless, I also use this same deer hunting anecdote to point out a personally disturbing trend I see more and more these days: long-range shooting at game animals. While I always tell folks in my seminars that the 64-yard shot at that Illinois buck was deadly, I quickly add that I took that shot “before I knew better.” And I go on to explain that while I’ll commonly practice at 50 and 60 yards or more, I seldom shoot at an animal standing more than 40 to 45 yards away.

“Deer and elk aren’t McKenzie targets,” I caution. “They can and do move. Distance magnifies any shooting error in form or yardage judgment. Also, a single step or slight turn by any animal can make the difference between a double-lung hit and dreaded gut shot. Frankly, I cringe when I read or hear about bowhunters taking 80 and 90-yard shots, much less shots of 100-plus yards. Too much can go wrong.”

BACK IN 1971 during a Nebraska bowhunt, I shared a camp with maybe two dozen members of the Professional Bowhunters Society, serious bowhunters all. Among the witnessed kills that week were a couple of antelope arrowed at 100+ yards. With stickbows. Shot instinctively. Nearly two decades later, when Dr. Jack Frost became the first bowhunter to collect all four species of North American wild sheep, he caught flak for mentioning one of his rams was killed at more than 100 yards. With a compound bow equipped with sights. There’s no question hunting tackle has evolved. Super-fast flat-shooting bows have changed things, but not all for the better. The weak link is now and always has been the shooter. My Black Widow recurve, handcrafted in the 1960s by the Wilson Brothers in Nixa, Missouri, is still capable of casting a hunting arrow 100-plus yards and killing any big game animal on earth. Ditto for my BowTech or Mathews cam bows, which routinely deliver my arrows to the target quicker. But in each instance the key is hitting exactly where a shaving-sharp broadhead inflicts the damage necessary for a quick, clean kill.

Admittedly, I know a handful of men quite capable of repeatedly hitting soda cans and other small targets at triple-digit yardages. I can’t and so I don’t take such super-long shots. And based on my 50-plus years of serious bowhunting, the same can be said of a majority of modern bowhunters. There’s a Grand Canyon of difference between shooting at a stationary, inanimate target and a living, breathing game animal. Missing the kill area by a foot or more means nothing on one target. On the other the end result can be a wounded, unrecovered animal. To my way of thinking, it’s simply not worth the risk.

Just because Chuck Adams or Ray Howell or Randy Ulmer are excellent long-range shooters doesn’t mean you can make the same shots. Every bowhunter needs to recognize his or her limitations and effective shooting range. Lobbing arrows at downrange animals is at worst irresponsible and at best risky. There’s something about the sight of large antlers that causes most hunters’ hearts to beat faster, knees get wobbly, and minds grow mushy, making shooting accurately under pressure-packed situations difficult enough. Add extra-long yardages to the equation and challenging moments of truth become even more problematic.

And speaking of challenge, what’s become of the time-honored bowhunting goal of getting close to wary game, remaining undetected, and releasing well-aimed arrows? What’s become of the emphasis on hunting, not just shooting? I know what still gives me an adrenaline rush after more than half a century afield carrying bows and arrows, is willingly accepting self-imposed challenges. These include the elements of individual woodsmanship, stealth, stalking ability, and near point-blank shots. Each is a key part of the bowhunting art. Each places the emphasis where it belongs, on the hunter, not his equipment.

I’ll have more to say on this important subject in next month’s column.

Save a Fawn - Memorable Predator Lessons