by Jen Jenkins
in Bowhunting Posts
0 0
A A
0 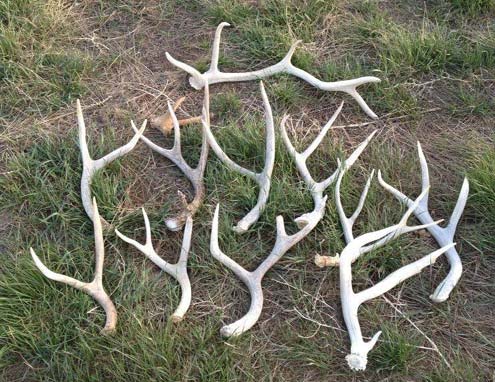 It had been a few months since my hunting season had ended and I was going stir crazy sitting in my house watching the snow fall all Winter. I decided it was time to get in shape for the upcoming elk season and the best way to do that was shed hunting. There are a lot of people that think shed hunting is about going to a hay field and walking around looking for sheds. That’s definitely not how it is when you go for elk sheds around here. Some of the places I go are the same areas that people elk hunt. It’s definitely a good work out to get yourself ready for elk hunting!

I had not gone elk hunting solo yet and now that I had killed my first deer solo hunting, I figured it was time to push outside of my comfort levels again and try elk hunting alone. What better way to prepare for that than to shed hunt solo? Just the thought made me a little uneasy as there was so much that could go wrong and I have never seen another person while I was out shed hunting before so I probably wouldn’t see one now. I kept thinking about all the what ifs like what if I fell and got hurt? Which really isn’t out of the ordinary for me, I am probably one of the clumsiest people in the world and am constantly getting hurt. What if I come across a mountain lion, bear or wolf? For some reason I have always had this irrational fear that I was going to get attacked by one of those animals. That’s one of the main reasons I had never done a whole lot by myself in the Mountains. I always took comfort in knowing that if I was with someone they could hopefully defend us against any animal we may come across.

Now that I was alone, that comfort was gone. Since I had started doing solo stuff, I had decided one thing I did need to have was some sort of protection other than just bear spray. (Funny side note: When I was a kid, I accidentally sprayed bear spray in the downstairs of our house thinking it was air freshener. Sorry Mom!) I decided to get myself a .41 mag. It was big enough to stop any mountain lion or black bear that may come my way, yet not so big that I would end up having it kick back in my face.

After going out a few times I finally started to feel like I wasn’t quite so nervous. But I still had an uneasy feeling at times when I would get deep into a canyon. There’s something so tranquil about being deep in the wilderness by yourself, but the quiet can also be almost deafening. One thing I learned about elk shed hunting is the elk like to get themselves deep into canyons. My normal rule of thumb, is to not look for sheds in places you don’t want to walk. It never fails for me, I will get to the top of a canyon that looks like it goes all the way down to the center of the Earth and just happen to glass down there and there one will be. It doesn’t matter if a horn is white or brown, for some reason it gets my adrenaline going and the spoiled little girl comes out in me and I want it. 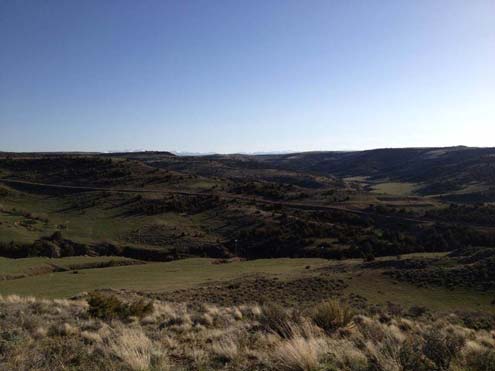 I start out at the top of the canyon thinking, what kind of stupid animal would want to go all the way down there anyway? Then once I get down there and get the shed strapped to my pack, I look back up at the top and think, what kind of stupid person would walk all the way down here for a shed? Oh yeah, that’s me. I’m still wondering if it’s stupidity or just obsession. I like to say obsession because it makes me sound a little less crazy, but sometimes I still wonder.

So far, the shed season had gone off without incident. I felt great, I was getting into shape, my shed pile was starting to really grow and I was dang proud of myself. Then came the day that I will never forget. I was just coming up out of a draw, it was starting to get dark which is much later than I usually like to be walking back to my vehicle. It was the end of Spring with crystal clear dark blue skies and the smell of fresh wild flowers. There wasn’t much snow left on the ground and the mule deer and elk had all shed their horns. I sat down on a rock and began to glass around the hill in front of me. As I was glassing, scanning the area some movement caught my eye. I quickly brought the binoculars  back to the place where I had seen the movement and what I saw  instantly drained the color out of my face.

I put my binos down and found myself  looking directly into the wide eyes of a mountain lion. He stared at me and I stared at him. I felt like he was staring right into my soul. I didn’t know what was racing faster, my head or my heart.  It was the most terrifying moment I have ever witnessed and I couldn’t remember what I was supposed to do. Was I not supposed to look into his eyes? Was I supposed to walk slowly away? Stay still? I tried to not look him in the eyes but I couldn’t help it. I felt like a statue and was absolutely frozen. It was almost like I was looking at the big cat for some sort of answer. Finally, after what seemed like an hour long stare down, my heart came out of my throat, I took a breath of air and my instincts started to take over. I slowly reached around and got my pistol off of my hip and I started slowly backing away from him. We were still locked on each others eyes and I don’t remember either of us blinking.

It was only by the grace of God that I made it up that hill  walking backwards, without tripping. I finally got to the top and knew that my vehicle was only a couple hundred yards away.  I could no longer see the lion and  didn’t know what he was doing or where he was but I continued taking slow, deliberate steps backwards keeping my eyes locked on where I had last seen him. At least when I could see him I knew what he was doing, now, not being able to see him I had no idea where he was and realized he could be anywhere. This was almost a worse feeling than staring him down.

I continued backing slowly until I reached my vehicle. I jumped in with my pack and everything still on. I exhaled and felt like I had been holding my breath the whole time. One of my worst fears had just happened and even though I wasn’t attacked, it really shook me up. I wasn’t sure if I was really cut out for all of this, maybe I had pushed myself too far.

That was the last time I shed hunted alone that year. Now I was sitting with my elk tag in my hand and had a decision to make. Do I let my fear hold me back and waste the tag or suck it up and go for it?  After weighing everything out, I realized there was no way I could miss out on elk hunting in the limited draw area I had drawn. I decided to go for it. Little did I know I would have to draw my gun again, on something much bigger than a mountain lion and I would actually have to shoot.

Bears On The Ground