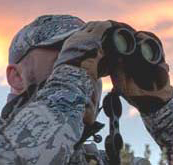 To all Eyes On The World Articles | Sponsored by: Carl Zeiss Sports Optics

In today’s world we often hear the phrase; “Bigger is better” or “More for the money”. However experience has demonstrated that this is not always the optimum case when discussing optics; specifically as it relates to binocular magnification for use while hunting. Hunting with lower magnification binoculars whether in dense hardwoods or the open prairie can be far more practical than with the higher power options.

Hands down the most common choice that consumers immediately gravitate towards when selecting a binocular is the 10X40 or something very similar in size. Where the 12X or even 15X magnifications have their place with specific applications like sheep hunting etc, The majority of hunters would be better equipped to select an 8X or even the 7X as their standard field binocular. Not to say the 10X isn’t the best answer for many of us roaming the countryside. My point is not to be too quick to overlook the lower powered options available.

Here’s why;
The higher the magnification the “less” you actually see. By that I mean your Field of View and Depth of Focus will be less with the higher magnification optic. This could easily equate into missing game while glassing. Remember your hunting binocular should be used primarily to find game. A buck’s head turning or the twitch of a tail outside the binoculars field of view will simply go unnoticed. Recognition of that bedded mule deer becomes an even greater challenge while glassing if lying closer than or beyond the depth of focus. (The higher the magnification the shorter the depth of focus.)

Use your binocular to look for movement and contrast in color. Once you have something worth a closer look get out your spotting scope for the detail work or direct your guide to take a look.

All things equal; lower magnification binoculars are also going to deliver a larger exit pupil for even better low light performance. This is extremely beneficial when hunting black bear or whitetail deer during the normal twilight hours when trophy bucks or boars usually show themselves. Combine the above benefits with less image jump and it is easy to determine why you should take a second look at a lower magnification binocular before making that purchase.

Remember – Use your binocular to find game first. Study the detail of the animal with a spotting scope once you’ve found it. Then make an ethical shot with a premium riflescope combined with the right reticle choice and magnification setting. More to come in the following months…

To the complete list of all Eyes On The World Articles.