Western elk have made a lot of news in the past four or so years, mainly because of wolves. We’ve heard about areas where calf production has dipped far below former levels. Some biologists say that wolves play a major role in that, while others say it is much more complicated than simply blaming wolves for lower calf survival.

Once wolves were reintroduced in the West, we realized just how little we knew about elk. Turns out that there are lots of factors impacting elk and elk behavior. Factors that weren’t there thirty years ago. For example a study done in Alberta watched cow elk and calves and how they reacted to traffic on roads and off-road ATV traffic. They observed elk in a national park with lots of tourists and no hunting and no ATV’s. And they observed elk on public land with lots of hunting and use of ATV’s. They concluded that ATV’s (even in very remote areas) disturbed elk more than high numbers of people in the National Park.

Another University of Alberta study showed that elk are like whitetail bucks. They are very individualistic in how they behave. Some move around a lot and graze in open areas on the most nutritious grasses while others move slowly, cautiously, and do not graze out in the open. Researchers showed that the bulls that moved around the most and grazed in the open were much more susceptible to hunters. I’m not sure we needed research to show that, but what this study did show was that from a behavioral standpoint there are two types of elk. Some are bold and others are shy. Not only was this true for bulls, it was true for cows. After reading this study, I found myself asking whether the “bold” elk are the ones taken by predators.

Elk habitat has also changed in the past thirty years. There is much more fragmentation that is the result of development. This brings elk into contact with humans and human activity a lot more. One of the reasons we see elk wandering through housing developments in the West is because the housing developments were built in elk habitat. The elk were there first, and in some situations, they are still there.

Of course the big change that keeps hunters talking and gives elk managers headaches as they try to manage elk, is the big increase in the number of predators. Thirty years ago we had relatively few grizzlies and almost no wolves in much of the West. Take the Yellowstone area. The grizzlies were there, but there were no wolves. Today we have lots of both species roaming in elk country. 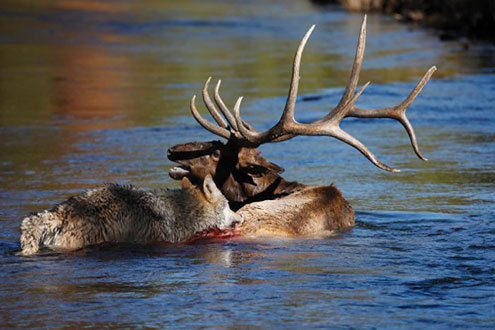 A study being done by the University of Wyoming and the state fish and game agency is looking at the declining elk calf production in the Clarks Fork herd. This herd winters near Cody and summers in Yellowstone. Over the past twenty years, pregnancy rates have declined rather significantly for elk that migrated, but not for resident elk that don’t migrate. There are those that believe that predation is the cause, but there are other possible causes. For example, during that twenty years the summers have been hotter and drier. Those conditions would lead to less nutritious forage and thus, might lower female pregnancy.

However, predators are also part of the mix. Migrating elk would be exposed to many more grizzlies and wolves than resident elk. If a resident elk is killed by a predator, that predator may well be lethally removed. When a migratory elk is killed by a predator, the chance for someone removing that predator would not be as high.

The thought is that the world is changing for elk that migrate. Migrating elk are at a disadvantage and that the whole process of wildlife migration may be evolving out of the system. Not only could weather and predators impact migration, but more fences, roads, and other development might also make migration a lot tougher for the elk.

A Montana State University study is looking at the impacts of wolves on elk. They found that a myriad of factors impact elk, including the density of elk, the severity of the winter, the numbers of predators (grizzlies, mountain lions, and wolves), and hunting pressure. What this study is showing is that answers to elk declines are very complex. For example, they suggest that predators cause elk to feed less, and this could lower calf production as the cows are not in the best physical shape to produce calves.

What a lot of elk research is showing is that managers at local levels have a very difficult job. We’ve got droughts, we have human development, we have two new predators (grizzlies and wolves), we have climate change that we know little about, and all of this impacts elk.

Having said all that, there is no question that we need to be managing wolves. That’s been difficult up until recently, but thanks to groups such as Big Game Forever, we are now getting some wolf control via trapping and hunting. Will that help our elk in the areas where numbers are on the decline? It is too soon to know, and it will take some long term elk studies to determine. One thing is for certain. Wolves are part of the problem, but even if we wiped them out, there still would be some management problems for elk. It’s a complicated world out there. Especially today.

For more please go to: The future of hunting

Scouting: The Blast Off