Save a Fawn – Memorable Predator Lessons 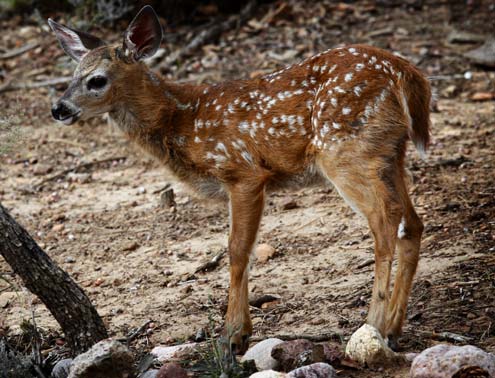 With our last whitetail season little more than a distant memory, late spring/early summer welcomes the fawn crop, and a host of new outdoor opportunities sure to strengthen bonds and further hone our hunting skills. A recent trip to Stretch A String Bowhunting Ranch in Jacksonville, Texas, a short 1.5 hour drive east of home, not only offered those opportunities, it far surpassed any off-season hunt I can recall over the past 10 years… and I didn’t kill anything but time!

The highlight of the trip was visiting with good friends James Foster, proprietor of Stretch A String, hog hunting expert and traditional archer extraordinaire, Brian Magee, Chris Walls of Fired Up Outdoors TV, and Michel Munoz, one of my favorite hunting buddies that flew in from Belgium for some good ol’ American R&R in the woods. While I do see James, Brian and Chris a few times a year, mostly during deer and turkey seasons, I don’t see Michel often enough; his last visit was two years ago—we needed to catch up.

Beyond the friends and memories, Stretch A String has become a favorite roost of mine because of the off-season opportunities to see huntable animals and to gain perspective on the problem with predation in Texas. On the first morning of our visit, we relaxed and enjoyed the cool, still morning with hot coffee and James’ famous toasted sausage and jam sandwiches, while watching cattle unsettled with the approach of coyotes, seven to be exact!

Stretch A String  isn’t just a 3,000 acre, free-range bowhunting paradise, it’s a working ranch. With a number of new calves on the ground, the place was ripe for the picking and every song dog between Bullard and Jacksonville seemed to know it. For 30 minutes or more, we watched the seven predators circle and approach the calves as cows continued to keep them in check. While the cows never really stopped eating for more than a minute or so—at a time the tension in the field was thick, so thick in fact, we could feel it hundreds of yards away on the hilltop where we savored the coffee and marveled at the pack of unrelenting, seemingly scheming coyotes.

Without rifles, we could do little, but watch. Fortunately, the cows won that battle, but night told a different story amidst the howls and yips of scores of coyotes, most certainly many more than the seven we had witnessed at first light. The following morning exposed the scene of the feast. Hollowed, torn remains of a calf were strewn across the open field not far from where we watch the show 24 hours before.

As we rode back to the ranch house I thought quite a bit about that little calf and what late spring might hold for the new fawn crop. Mortality rates in Texas are quite high because of predators, not just coyotes, bobcats and the occasional cougar, but hogs, too. Studies have shown fawn mortality as high as 90 percent in some areas; although where 50–70 percent is more common. Sadly, we are completely overrun with predators in Texas; and fawns, livestock, turkeys and other small game foot the bill. Armed with this information, what is a hunter to do? Hunt!

Hunt we did. Brian and Chris hunted together, vying for more top shelf Fired Up Outdoors TV footage (and they got it!). Brian captured excellent night hunting footage as he scored on a monster sow, 285-pounds and a ranch record; not bad for a slice of free-range bowhunting heaven.

A short time later, Brian connected on another hog; much smaller, perhaps 100-pounds or so, but still, a great meat hog. Both hogs may mean the preservation of a few more fawns. They also saw coyotes at their location, but none close enough to suffer the devastating blow of Brian’s Shuttle T-Lock broadhead.

I, on the other hand, fired up the ThermaCELL and readied my BowTech Experience for some nighttime action while Michel assumed his role as my spotter, choosing to reserve hunt time for later in his vacation. As a bowhunter with compromised vision, I was also anxious to field test my new HHA Optimizer, but I never had the chance. We saw numerous hogs (two happened to be incredibly large boars) and three coyotes pass by in near-bow range, but never quite got our stars aligned for a quick kill. Not to worry, I’ll be back at Stretch A String soon enough, doing what I can to thin the ranks of East Texas predators.

As hunters, we do a great deal of work and good when we hunt predators in the off season, but there is much more work to be done if we are to ever turn the tide of high mortality rates and other costly damage on the deer population. Late spring, early season means it’s time to wipe away your postseason blues in a concerted effort to help improve survival of this year’s fawn crop.

Imagine living in a place where whitetail deer, turkey, quail and other wildlife populations flourished as they do in other western states? Why can’t we have premium deer and turkey hunting right here in North-Central and East Texas? I’m telling you we can! I’m telling you we would, if more hunters expanded their season and the list of animals they pursue.

More than strengthening bonds, creating new hunting memories and doing your part to help whitetail deer and other species thrive; hunting hogs, coyotes and other predators is a great way for families to reconnect. More importantly, we have an opportunity as parents, guides and mentors to teach life lessons in the field.