by Marc Anthony
in Bowhunting Posts
0 0
A A
1 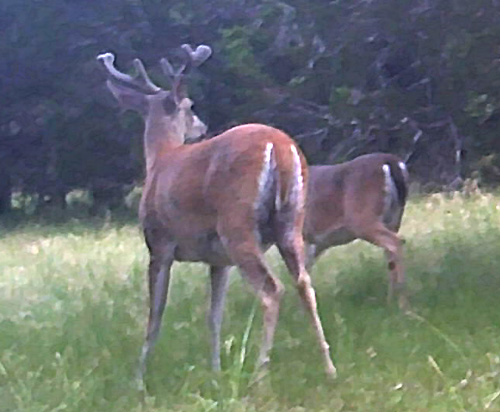 Trail Cameras like Spypoint can show you what the deer are doing at what particular time of day.

The ever-popular trail camera made its way into the timber in the 1990’s with much enthusiasm. It has progressed from something that looked like was made in a high school shop class to a sophisticated electronic device capable of playing “Private eye”. Evolving from a film-carrying camera to a digital storage mini-computer, it’s easy to understand why so many people have opted to use such a useful piece of equipment.

With its use come several bi-products. Some positive and some negative but either way, they’re there. Having a camera in the woods 24/7 can really be helpful when it comes time to collect data. Making multiple trips to check on your camera can have a not-so-positive effect too! Add theft, new batteries, numerous memory cards and your new little toy can be costly. But hey, nothing comes for free, right? Most people think the reward outweighs the risk and for that reason, the once secretive timber is now a place of constant surveillance.

The convenience of such a device really makes hunting fun. You really never know what you miss until you get your SD card out of the camera and check what’s on there. When I get mine out, I’m like a kid opening up a box of Cracker Jacks looking for the toy! It’s so fun seeing a big buck when I go through the pictures; it triggers the anticipation for the next trip immediately. What most people aren’t aware of is the fact that these cameras only catch a small glimpse of what is REALLY going on in your neck-of-the-woods!

With the effective range of most cameras being only 30 yards or so, there’s a lot of action that goes un-noticed. Add the fact that most hunters aren’t lucky enough to place the camera in the most favorable position to begin with; if your camera remains stationary, you’ll really never know what you’re missing. So how does a person get the most bang-for-their-buck when using their trail camera?

Here’s what I do with my trail cameras. After a thorough scouting and determining where I want to place my first camera, I’ll proceed to my destination and physically mount the camera. I’ll jump in my truck and head home. 2-3 weeks later, I’ll return with my laptop or digital camera in hand and pop the SD card in either of them. Once I verify that I have a big enough buck to chase, I’ll determine which way he came from.

I’ll simply back the camera up about 30-40 yards, in the direction he came from, and re-mount it to another tree. Back home I go! You guessed it, 2-3 weeks later, I repeat the process. Over the summer, I have enough data to draw a map where he’s been traveling. I’ll note any deficiencies and the weather from those days accordingly. In other words, the days he took a different path is usually because of bad or worsening weather. I’ll remember that information for the days I hunt in bad weather and pay special attention to those different routes.

Deer are habitual creatures and remain predictable until the pre-rut kicks in, which is at the end of October here in Illinois. Pattern him now and your chances of killing him are exponential in the first two weeks of October! It’s a simple process and gives you an excuse to be in the woods all summer. All too often, hunters will place a camera in one place after they see the buck they’re after and do nothing else about it. Worse yet, many hunters won’t place their cameras in the timber until September, which of course, doesn’t give you ample time to discover his favorite routes. If done correctly, you’ll be surprised where you’ll see your buck travel to and from. Big bucks usually take different paths than does and smaller bucks, so you’ll see them on the sides of hills, small gullies, and in thick nasty brush. I’ve even found them behind dead trees that are piled up in inconspicuous places. Rotating the camera in reverse tells all!

Unfortunately, humans can be nasty creatures. Because trail cameras are expensive, they’re also targets for thieves. Every year you’ll hear of numerous stories of people stealing trail cameras and the after effects it leaves upon the victim. I’ve come up with a way to safe guard your trail cameras that may cost you a bit more, but you’ll never have to guess who stole it! I purchase and position my trail camera where I want it to be and then place a second camera way up high in another tree pointing toward the first camera. If someone takes the first camera, the second camera will capture him or her red handed. Unfortunately, that happened to me last year but I did catch the crook. Once I get through all of the paperwork, justice will be served!

One last word here and that is when I set my cameras up for security as mentioned in the aforementioned paragraph, I purchase a cheap camera for the elevated position (the camera that points down toward the good camera) because a person who is trying to steal the good camera will most likely be stationary long enough for the cheap camera to acquire his/her identity. Good camera or bad, if you don’t rotate your cameras throughout the year, you’re wasting valuable data you could have had in your fingertips! That’s data that can point you toward one heck of an opening week in the deer woods!