Where the Buffalo Roam – Swim 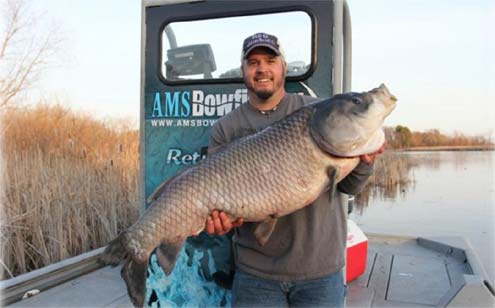 The Buffalo roam in the Great Plaines and travel in large herds as the move across the landscape at a steady nomadic pace. But, did you know that Buffalo also lurk below the murky Wisconsin waters and begin to work their way from the depths to the shallow waters as the water temps reach 62 degrees?

My seven year quest began on a bowfishing trip to the central Wisconsin waters ways. On that late April day I was filming Jeff and Cindy Braun owners of AMS Bowfishing. The main target that day was common carp. The water was like a mirror and not a cloud in the sky made visibility excellent. As the duo trolled across large sand flats a large V in the water appeared as a fish was busting for cover. In one swift motion Cindy swung her Fish Hawk bow and released an arrow at the large black underwater silhouette. The water exploded and the battle was on. Soon Cindy was pulling in one of the biggest fish I have ever seen. The fish tipped the scale at 42 lbs and was an absolute beast in my mind. Jeff and Cindy explained to me that it was a Buffalo Carp and they grow very large in this particular body of water. Cindy said the State record was 62 lbs and the thought of adding twenty pounds to her fish was mind boggling. I wanted in on some of this action.

For the next several years I made the hour and a half drive to this lake every April in hopes of getting a chance at a fish of this size. In 2011 I shot my biggest Buffalo Carp weighing in at 43 lbs. The following year I attended the Wisconsin Bowfishing Association tournament on the lake and during weigh in a fellow bowfishermen weighed in a 58 lb giant. I couldn’t believe the size of the fish and the quest to shoot one of these underwater giants was starting to drive me batty.

I was back at in April of 2013 making several trips checking on water levels, water temps and fish movement. On April 29th I headed back down for an afternoon hunt in search for one of these giant buffs. Fish movement was good but water clarity was poor to say the least. Fish were busting out from all directions leaving huge wakes and underwater bombs of dirty water.

Finally a Buff made a mistake and showed herself for a split second. That’s all I needed as I swung my AMS Fire Eagle bow and released a Tigershark arrow into her side. The water exploded as the Buff spooled line from my 610 Retriever Pro. The fish surfaced and I knew it was a giant and I called for backup to my friend Kelly Kramer and my brother Korey Schillinger. One well-placed back up shot and we were hoisting the giant into the boat. I couldn’t believe the size of the fish and I was speechless at her size. We quickly put her up on the digital scale and it read 52 lbs.

I figured that was it, I finally shot a Buffalo carp over 50lbs and I was smiling from ear to ear for a week straight. Well a week was all I could take because once again I was hooking up the AMS Bowfishing boat and getting ready for the hour and a half drive back down.

I was prepping a different boat on this trip and forgot to grab the digital scale from the other boat. I was accompanied by my good friend Allan Brusky and his wife Amy on this trip. We eased back into the bay and once again fish movement was good but water clarity was terrible. We shot a few fish before darkness stated to creep upon us and now we were just sitting there waiting for complete darkness before we turned on the generator and flipped the lights on. As we were sitting there talking in the back of the boat for reasons unknown I walked to the front of the boat and stood on the shooting platform. I could see a fish was stirring up the bottom and leaving small ripples on the water. I reached down, grabbed my trusty Fire eagle bow and nocked an arrow. I could tell the fish was coming my way and when it got 5 yards from the boat I hit it with my AMS Spec Ops Light. This is a bow mounted light that projects 400 lumens and can be turned on by a pressure switch that I have mounted to the riser of the bow. 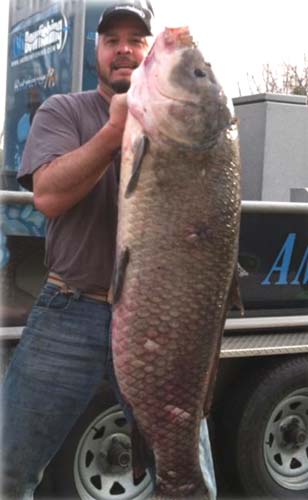 When the light hit the water I could see large scales and a little bit of the back as the fish slowly swam through bombs of dirty water. I pulled my bow back and released an arrow. The 350lb line hissed through the water as the fish headed for the mouth of the bay. This fish actually turned the nose of the boat and was spooling my line very fast. I yelled for my buddy Al to get up here and get his bow ready for a back-up shot. When the fish surfaced I could tell it was larger than the 52 pounder I had shot 6 days before, and I told Al to make sure you hit this fish when it comes back up. I slowly eased her back to the surface and Al made a perfect back-up shot.

We gaffed the monster Buff and as I began to pull her in the boat I could tell she was a true giant. I was awestruck and couldn’t talk as I finally could see the size and girth of this fish for the first time. Lots of high fives and cheering was going on at the back of that bay.

Not having a scale in this boat we put her in a barrel, filled it with water and continued to fish until 10:30 pm before calling it quits. I was back up the next morning at 7 am and had my wife come out so she could take some pictures of the fish during daylight. I stopped to pick up my Dad and we headed out to the AMS Bowfishing shop to clean the boat. Once we arrived I ran to the garage to get the digital scale. I was expecting to see 59-61 lbs. Once I hoisted the fish on the scale my jaw hit the bottom of the boat. It was bouncing between 68-69 lbs and I yelled to my Dad ” that’s a new State record”.

Knowing that this Buffalo Carp was a new potential alternative method Wisconsin State record the rat race began. I had to find a certified scale to get this monster weighed; I had to contact a Wisconsin DNR warden, I was calling all of my bowfishing buddies and I had to make a 2 ½ hour drive to Minneapolis by 2pm for a banquet.

I was put in contact with Warden Berry Fetting and he met me at the AMS Bowfishing shop and we headed down to the Stratford CO-OP as the manager said we could use his certified scale. It was pretty cool as a small crowd gathered around the scale to watch the weigh in. After laying the giant Buff on the scale it seemed like several minutes ticked away before Warden Berry Fetting finally said 70.5 lbs.

Wow, I couldn’t believe it. My seven year quest for a giant Buff finally came true. To a bowfishermen, shooting a 70 lb Buff is like shooting a Boone and Crockett buck. I was in the right place at the right time with lady luck shinning down on me.

I have to give special thanks to AMS Bowfishing for giving me the right equipment to chase these giant fish and to my wife Julie and two girls for allowing me to spend countless hours on the water away from home. We did make it to the banquet an hour late, but only after I finished my seven year quest.

For the best in bowfishing excitement go to: AMS Bowfishing

For more columns go to: Bowfishing the World