I COULDN’T BELIEVE what I was reading. The manuscript open on my editor’s desk was detailing how an elk hunter was lobbing arrows at a distant bull standing just over 100 yards downrange. Seems the archer had run out of cover during his stalk and decided he’d try some long range shots in hopes Lady Luck would help fill his tag.

As I recall, the article’s author said he couldn’t see where the first arrow hit, but it was close enough to make the bull “Jump and take a few steps.” A follow-up shot had the same effect. And a third arrow “Apparently hit the bull because he began running in circles.” The writer said it was too far to pinpoint exactly where the shaft struck, but he knew it’d flown true because of the bull’s reaction. Moments later the wounded bull took a few staggering steps and dropped. Turned out the broadhead cut the carotid artery in the bull’s throat.

The writer was jubilant. All I felt was queasy.

It goes without saying I didn’t buy and publish this irresponsible story in Bowhunter Magazine. And in my rejection note, I resisted the temptation to tell the author what I really thought. But mostly I was stunned by the fact this “bowhunter” actually believed he’d accomplished some sort of amazing feat and wanted others to read about his good fortune. In truth, printing a story like this would bring a smile to the face of any anti-hunting fanatic. It was proof positive that hunters have a callous disregard for the game they hunt and are unethical slobs with nothing on their pea-sized brains except filling tags and bragging about kills. 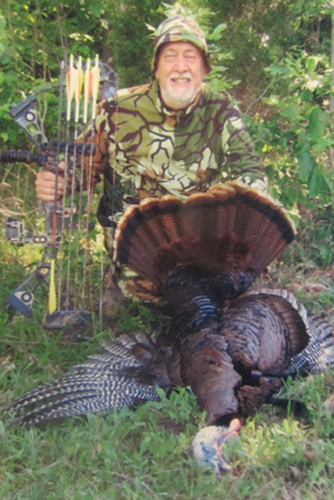 When this skittish tom kept gobbling but wouldn’t close the distance, the author slipped out of his ground blind and left his decoy setup behind to move closer. Hiding just inside the timber beside a small food plot, he called softly a few times and waited. The curious longbeard finally appeared, slipping along the field’s edge. One shot at 16 yards put him down for keeps. Hunts like this, with pulse-thumping close-range action, are what bowhunting is all about.

Sadly, at times hunters are their own worst enemies. The mindless words and actions of a few twits all too frequently incriminate all of us in the eyes of a public which largely accepts hunting but is rightfully critical of unethical, irresponsible behavior.

IN LAST MONTH’S COLUMN, I commented on a disturbing trend I see more and more in the bowhunting magazines and on television programs. That trend is shooting at game animals standing 80, 90 and 100+ yards away. I stated that distance magnifies common mistakes in releasing a shaft, judging yardage, and pushing or exceeding the limits of one’s effective shooting range. I also said that animals aren’t immobile paper or foam targets; they can and do move, often at inopportune times. And at such distances, a slight turn or single step can mean the difference between a lethal hit and a wounded animal that may or may not be recovered.

To me, as previously indicated, bowhunting is – or should be – basically a short-range proposition. The daunting challenge is slipping close to wary beasts – or allowing them to walk close to where you wait – knowing their survival depends on keen senses that are far superior to yours. The challenge is remaining unseen, unheard, and otherwise undetected, ignoring jangling nerves and shaking knees, and then drawing and releasing a well-placed arrow which results in a quick, clean, and humane kill.

That is the essence of the sport I’ve pursued passionately for more than 50 years. 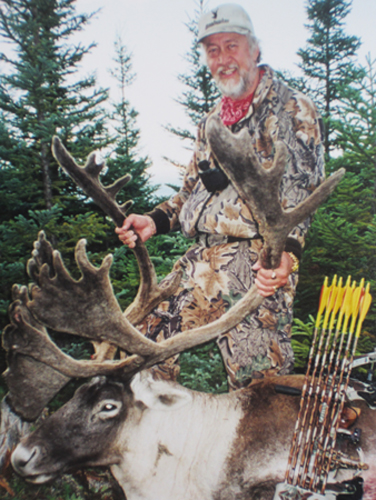 THIS ONE-TIME SCI WORLD RECORD woodland caribou was stalked and shot at about 15 yards during a Newfoundland bowhunt. The challenge of outwitting an alert big game animal on his home turf is the essence of bowhunting at ground level. A vast majority of the author’s trophy-class animals were arrowed at 30 yards and under, with many taken at 20 yards and less.

Some will argue that you can get too close to game, and certainly you can. They note that drawing a bow and releasing an arrow at an animal standing short yards away may result in that animal “Exploding” and the arrow only wounding these close-range targets. That, at times, is true, but knowing when to shoot and passing up all risky shots is something every savvy bowhunter routinely practices. Shooting a wired, alarmed, or moving game is usually a recipe for disappointment if not downright disaster, no matter the distance of the shot.

ANECDOTAL EVIDENCE HAS SHOWN ME that when you’re patient near point-blank shots happen with routine frequency and effectiveness. I arrowed my first Wyoming pronghorn from a sage blind at 7 yards; my most recent antelope was killed at 12. The last moose I killed, a Montana Shiras bull, was standing just under 4 yards when my broadhead cut through both lungs. A Colorado bighorn ram was standing broadside at 22 yards; a New Mexico 6×6 elk, 14 yards; a Saskatchewan record book bruin, 10 yards; an Illinois whitetail buck, 16 yards; a Northwest Territories muskoxen that taped a mere inch off the bowhunting World Record, 20 yards; an Alaska/Yukon P&Y bull, 16 yards; a one-time SCI World Record woodland caribou from Newfoundland, 15 yards; and a California blacktail, 12 yards. My short-list of up-close-and-personal examples goes on and on. 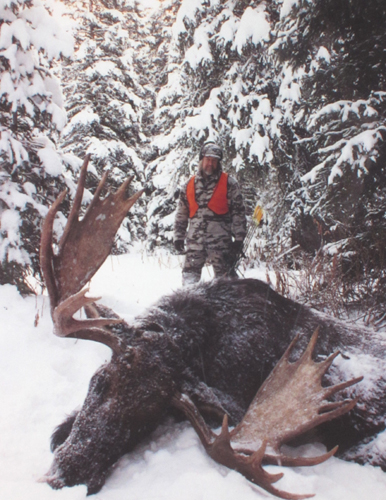 A ‘LONG SHOT’ OF 40+ YARDS dropped this snowy day Wyoming bull. The author routinely practices at ranges of up to 50 and 60 yards for this kind of occasion, but much prefers to shots of half those yardages. His last Montana moose was arrowed at less than 4 yards, which admittedly is a bit too close.

Added to that mix are memorable longer-range (for me) shots; a 45-yard downhill shot at a Wyoming bull, another 40-plus yard shot at a Quebec caribou, a 50-yard shot at a browsing Wyoming muley, not to mention the 64-yard shot at the southern Illinois whitetail I wrote about in the opening paragraphs of my last column. 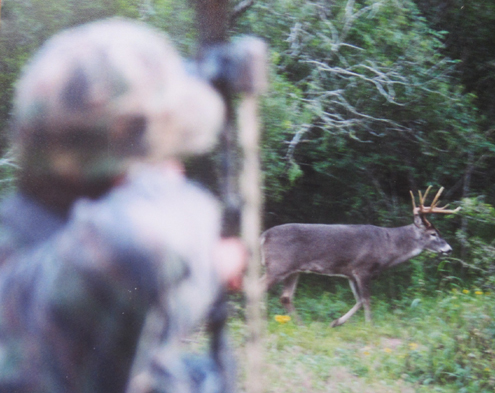 A CLOSE-RANGE PROPOSITION – The author believes that bowhunting at its best requires hunting skill, not just shooting ability. Both are important ingredients, but long-range arrow-flinging places the emphasis more on equipment, not the woodsmanship involving multiple human talents necessary to slip close, remain undetected, then drawing and releasing a well-aimed arrow at a wary animal standing within good bow range. That is a primary difference between hunting and shooting.

Routine practice at long distances can make you a better, more confident shot. That’s why I’ll regularly practice out to 60 yards and more. But I remain convinced that hunting bows always were, are now, and always will be relatively short range weapons. People who rely on their equipment more than their personal hunting skills — including woodsmanship, stealth, and stalking ability – are missing out on the true challenge of bowhunting. It’s a one-dimensional approach to an ancient sport that gives modern men and women the opportunity to step back to a time when good hunting skills made the difference between survival and starvation. While we no longer need to hunt to survive physically, I’m convinced our souls still hunger for fair chase pursuit that is the perfect blend of hunting and shooting, not simply shooting.