A hunt loaded with excitement comes to an end with the author posing with his trophy bull.

The Spanish Fighting Bull, “Toro Bravo” is an Iberian heterogeneous cattle primarily bred free-range on extensive estates in Southern Spain, Portugal and Latin America where bull fighting is organized. Fighting bulls are selected primarily for a certain combination of aggression, energy, strength and stamina. Some folks trace the origins of the fighting bull to wild bulls from the Iberian Peninsula during the Roman Empire. Their DNA is found in cattle from Africa and most likely introduced in Spain during the Moor Occupation.

The Fighting Bull is characterized by its aggressive behavior, especially when solitary or unable to flee! Many are black and brown but other coloration are normal. These bulls are well-muscled extremely athletic and unbelievably sturdy. A complex of muscles over the shoulder and neck give the bull its distinctive profile and strength. The bull’s horns are longer than most other breeds and mature bulls will weigh in at a hefty 1100 to 1600 lbs.

The San Mateo fighting bulls, are certified pure strain bulls and cows out of Mexico, in fact the Main Breeding Bull ‘Conquistador’ of Mexico’s San Mateo Ranches sire was granted a pardon from Madrid’s Bull Arena for exhibiting exemplary stamina and strength. This might give you some idea as to how tough the San Mateo Fighting Bulls are. These Fighting Bulls are truly the most Dangerous Game Animals in the state of Texas.

Dennis Erskine had called me on several different occasions to come and hunt these dangerous bulls with my bow and I agreed as my schedule opened up. I knew this would be an exciting show my Tex/Mex Outdoors TV audience would enjoy. My cameraman and I arrived at the San Mateo Ranch and the weather was really great, high in the 60’s, low 50’s clear with the moon on the last quarter.

This is really a whole new adventure, as far as I know no one has taken a Spanish fighting bull with a bow and arrow. I also know that these bulls are aggressive and stealthy with the mentality to spot and stalk you? What was I thinking?

We started the hunt that afternoon on this 1000 acre low fence ranch located between Brackettville and Del Rio Texas, an area with some really great history. We decided to get into a Ranger and cruise the senderos to find a bull I could put a stalk on. This area is semi arid desert and has a ton of White Sage brush that grows to be 6 feet tall with lots of cactus, yucca plants, mesquite, live oak, retama and grass with water in tanks and creek bottom. Perfect country for these mean, aggressive and hateful monsters! 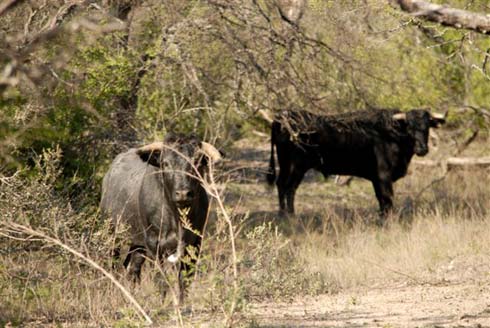 We had spotted a really huge Black Bull and a Grey Bull hanging together and feeding mid afternoon. We got our gear together and decided to make a stalk. We had the wind in our favor but the bulls had seen our approach and as we moved in closer they took off in the direction of the creek bottom and we knew the stalk was up.

The next bulls we spotted were two huge Black bulls feeding and they had no idea we were in the area or the world as far as they were concerned. As we started our stalk, I made sure my bow was ready but Dennis also had his German made Heym 500 nitro express / 570 grain double gun ready just in case! When I asked Dennis why the big gun he replied with the answer I knew the answer to, “These bulls are very dangerous and will charge you if they feel threatened or you invade their space unexpectedly. I just never take chances with them.” This hunt was not for the faint of heart!

As the afternoon progressed we had several different occasions to stalk different bulls, for one reason or another no shots were taken. One stalk especially was a real nerve shattering experience! We spotted a huge red bull I really wanted to try and take. As we started our stalk the bull moved on us and we had to back off to get the wind in our favor. When were able to get on the him again he was moving cross wind and we got in front of him in a good position for a shot. As I was just starting to draw on the bull at 30 yards my cameraman decided to get to my right and film an over the shoulder shot! These bulls have great eye sight and he picked up the movement and the big stare down began. For over 15 minutes I held my bow up ready to draw, my cameraman was standing with the camera on his shoulder and Dennis standing with his 10 lb cannon at port arms! Sweat poured out of every pore in my body for I knew we were just a blink of an eye from a full blown charge!

During this, all kinds of scenario’s went through my mind and I knew this could go really bad quickly. I’m not sure if the bull knew what we were but with 1400 lbs of hate and aggression staring at us I wasn’t sure it really mattered. If he felt threatened in any way I’m sure his answer would be to simply charge. Finally the Bull turned and disappeared in the white sage. Relief is not the right word to use but this is a family site and I can’t really say what I said as I watched the bull move off. I did say to my cameraman that in the future if I stop you stop no excuses or no exceptions! The cameraman, looked me in the eye and stated, “Don’t you worry, never again will I do that”.

The next morning we were out again. We wanted to be sure to see these bulls before we started our stalks, with yesterdays event still fresh in our minds. We spotted the red bull again and we decided to make another stalk on him as he was in an area with a huge patch of White Sage between us and him, plus the wind was right.

We loaded up and started moving through the head high White Sage, moving into the wind when we walked right out into an opening that was about 60 yards wide and about 80 yards across and there stood 1200 lbs of pure hate! This Bull had already made up his mind that we were way too close to him and before you could spit the charge was coming fast and furious! I drew my bow but the bull kept his vitals from me as he was locked on Dennis and it was a straight on charge. I yelled at Dennis to “Shoot him, shoot him!” At 15 yards Dennis had been hoping the Bull would turn off but he did not! When the dust cleared the black bull was laying lifeless 3 feet from Dennis!

Dennis, turned and asked me, “Why didn’t you shoot”? My only reply was a meek, heart still in the throat, “I had no killing shot with my bow”. Dennis advised that this bull had been a pain in the butt for a while, had attacked one of his trucks, had tried to knock one of his tractors off a sendero and had chased one of his vaquero’s all over the ranch. We field dressed the bull and called the Meat Locker.

That afternoon we hunted hard and saw several good bulls but all of them were running for heavy cover. So went day two.

Day three was cool and overcast with a strong south, southeast wind. It looked like it was going to be a good hunt but the morning went quickly without one stalk. I suggested to Dennis that we should take a ground blind to one of the waterholes where the bulls were coming to drink and maybe I would have an opportunity to put an arrow through one of these brutes. Well, we were on our way to one of the waterholes when we saw a bull feeding behind us near a small live oak motte. We stopped and sneaked back to take a look and there we found a huge blue, black and white bull feeding into the wind. We took a few minutes to put together a stalk. We had plenty of cover with a lot of Yucca and Cactus, we had a single bull and with the wind right I thought this was what we’ve been looking for.

We slowly covered over 80 yards and were within 50 yards of the bull who we thought was alone and Hombre did we ever get a surprise! Not 50 yards to our left were two other bulls standing with heads up and looking dead at us! Unexpectedly the two bulls started to move away and I looked back at the Blue/ Black Bull. He was intently watching the other bulls but stayed put. I said, “Come on, lets go” and we moved another 10 yards where we could get to some cover. I didn’t have time to range the shot before I made a yardage assessment, nocked an arrow and came to full draw. I put my 40 yard pin right behind his front leg, let out some air and turned the arrow loose.

The sound that came back to me sounded like you taking a Louisville Slugger and slamming it against a door facing! The arrow went all the way to the fletching and the Bull spun around and took off in a death run of only 60 yards, spun around and fell over dead.

Congratulations extended we waited a few more minutes to see the bull was really down and then started toward our trophy. Dennis led the way when suddenly I saw him put the brakes on and raise his Hyme 500 Nitro Express. The two bulls we had scared off had circled back and were now in a full blown charge and we had nowhere to go! I’m not sure what the reason but fortunately they turned off at the last minute and headed into the brush. In a heart stopping instant, it was over.

I had one of the most difficult animals in the world on the ground with my bow and arrow. This Spanish Fighting Bull was one heck of a beautifully colored blue, black and white trophy. 1400 lbs of mean rolled up in a very smart, aggressive package with lots of strength and stamina. If you have it in you contact Dennis Erskine Safaris to book a hunt of life time.