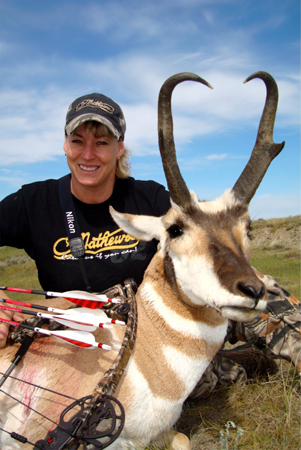 The Sportsmen's Act would guarantee our right to hunt on federal lands. (photo by Michele Leqve).

Back in 2000 Congress passed a bill to solve problems caused by large Hollywood movie production companies working on federal land. Many times they wanted to film movies on public lands and this created hardships on average citizens who also wanted to be on public lands. So the government passed a bill that created usage fees and other mandates aimed at the big guys, the big movie productions. However, as the government often does, it went overboard in the wording of this legislation and the average outdoor writers and small crews filming hunting and fishing shows (crews of two or three people) got caught up in this legislation.

It isn’t hard to see the result of this action for us little people. We’re the hunters (and television people too) with two video cameras and one hunter or fisherman. Or just an outdoor writer videoing their fishing trip or taking pictures for an article in a magazine. They had to pay the huge fees and live by guidelines that were written for magnet movie productions. Thus, individual journalists or small film crews lost access to public lands. Understand, these folks did not, do not, interrupt the average citizen’s use of public lands as the big guys did while they filmed major movies.

Outdoor writers, such as myself, suffered under this legislation. Paper work and large fees were required for a journalist who wanted to do a story on wildlife, flowers, fishing, birds, you name it, on federal lands. The requirements to get permission to do individual journalism things were difficult and sometimes impossible. It was a simple case of government over kill, similar to what we will witness with Obama Care in the next ten years. This is why we needed new legislation to remove those inequities.

Enter the House Public Lands Filming Act (HR 2798). This bill makes a distinction between a small film crew doing a hunting or fishing television show versus a major Hollywood movie production. The bill carries a reasonable fee of $200 for film crews of five or less on federal lands.

On the Senate side we have the Sportsmen’s Act (S. 1335) that also addresses this problem as well as several other problems. The provisions for small film crews are the same as the House version.

Did you know that it is illegal to transport a bow across a National Park? I know you can’t hunt on National Parks (and that is another rather ridiculous situation), but although you can transport a cased gun across a National Park, you cannot do that with a bow. What’s that all about? Who knows, but it is what it is. So if you are going on a western bowhunt on BLM or Forest Service lands and you happen to drive through Glacier National Park, or Yellowstone, etc., you are in violation of a federal law. This Sportsmen’s Act would take care of that problem.

The Senate Sportsmen’s Act would also allow the Secretary of the Interior to authorize permits to import legally harvested polar bears that were taken before the 2008 ban on such importation. Just common sense. Right now there are hunters who took polar bears legally before 2008, but they cannot get their trophies into the United States because a ban was put in place after they made their hunts. You can bet the anti hunting organizations loved this one. Maybe this will pass and this glitch will get solved.

The Senate bill also excludes ammo and fishing tackle from the Toxic Substances Control Act. We’re talking lead here, and this federal bill would take that out of control of the feds and put it in control of the states. If a state didn’t want lead bullets or sinkers used, then they could legislate that, but the bill states that the EPA cannot call the shots. How refreshing it would be to get a little Reaganism states rights back into this country. There also is a provision in this bill that mandates that lands managed by the Bureau of Land Management and lands managed by the U. S. Forest Service (these both are “our” public federal lands) be open to hunting, fishing and shooting unless specifically closed by the agencies. Sure, we have such rights now, but given the present political climate coming out of Washington, there is no guarantee we’ll have such rights in the future. This bill would solve that situation too.

Yes, contact your legislators and get them to support these common sense bills that help to protect our rights on federal lands.