This week I received the Flying Arrow Archery Toxic Broadhead, it is a new fixed broadhead design that is unique in that it introduces a greater cutting surface in a compact design.

Usually cutting surface is determined on how long and wide the design of the broadhead blades, but the Toxic relies on a unique curved blade design.  The wound channel resembles a three-leaf clover pattern, which incorporates close to five inches of cutting surface.

The first thing you will notice when you pull the broadhead out of the package is the tight tolerances.  Running your finger over the ferrule where the chisel point meets you will notice no gaps or spaces between the main body.  The blades show no movement against each other as they are locked into place.  Applying pressure to all sides of the blades shows zero movements from the ferrule as though the broadhead was one integral piece. 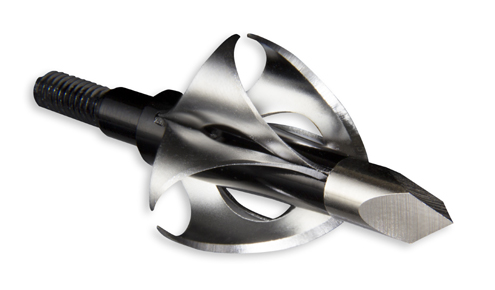 The blades are honed only on the inside edge which at first I thought was puzzling.  Why not have both sides honed to give the sharpest blades possible.  But after thinking about the shape of the blades it all came together.  By sharpening the inside, the blades will physically expand outward while cutting through flesh.  This is because the outward shape of the cutting surface directs the blades outward.  Combine this with the gap between the corresponding blades thereby allowing further flexibility to help channel harder material. 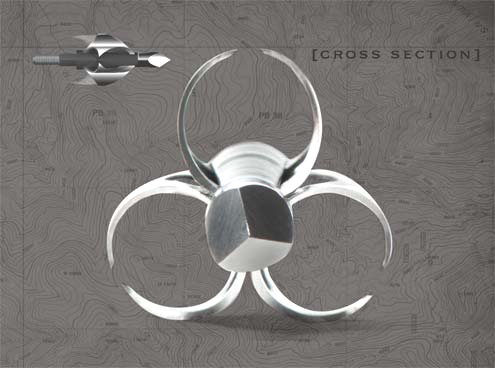 The engineers at Flying Arrow Archery came up with the design elements to allow the following;

Arrow dynamics Channels the air back over the arrow for better accuracy.

Now in my tests this was very prevalent.  They were conducted at 20 Yards and showed the Toxic to be very accurate.  Utilizing 2” Vanetec High Profile vanes set at 2 degrees offset on an Easton ACC 3-60 arrow out of a Bowtech Destroyer 350 the picture below tells the story. 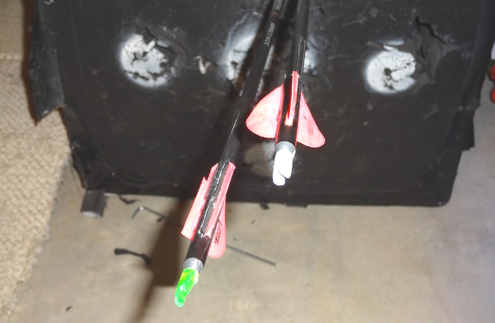 As you can see the Toxic blade broke the nock as well as shaved two of the vanes off.  This demonstrates the accuracy of the Toxic Broadhead as one of the circular blade patterns actually enveloped the shaft. 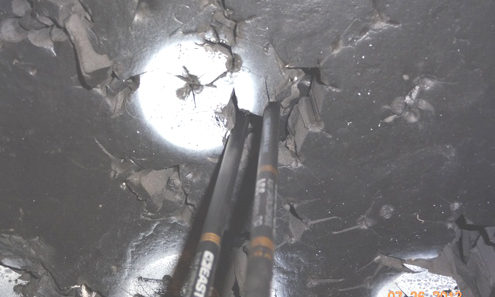 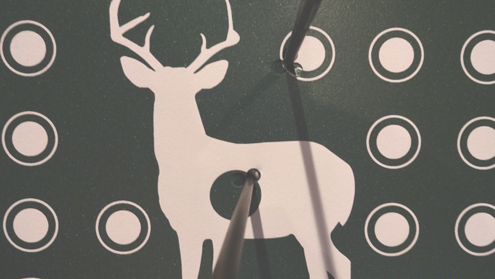 Flying Arrow Archery wanted to design a head with a cutting diameter that would reduce the likelihood of hitting bone and maximizing the wound channel.  The wound may not be as wide as other fixed blade or mechanicals but by creating a larger wound channel or core, the wound has fewer tendencies to close up.

The close to five inches of cutting surface, combined with the razor sharp blade pattern maximizes the wound channel basically creating a hole in the animal.  This results in massive hemorrhaging which is the ultimate result of death in any bow kill.  My high-density targets showed the results when large circular columns were extruded when retrieving my arrow.  This is known as a “Radical Core Decompression Wound”, the most lethal wound possible.

Open blade design with honing on the inside surface

As I mentioned earlier, this tapering design allows the blades to expand as they travel through material.  As you can see from the two pictures below, the first shows the blades without any resistance.  However the second shows how the blades expand as material travels through them, mainly because of the honed inside edge.

The blades are razor sharp out of the package.  I do wish that the Toxic came with practice blades.  Shooting through the target left them in great shape but because of the design there is no way to self sharpen them.  However, you can purchase replacement blades.  Just unscrew the chiseled tip, remove the old and insert the new.

The inventor, Chris Rager, who is well known in the archery industry thanks to his previous successful archery company, Trophy Ridge Rocket Aeroheads, is one who thinks outside the box.   In working with the new design he has logged over three years developing and perfecting the Toxic Broadhead.

The Toxic Broadhead retails for 44.99 but searching the archery stores on the web you can find prices ranging from 35.00.  This is on par with many broadheads in the marketplace.

I am looking forward to trying the new Toxic Broadhead from Flying Arrow Archery when the whitetail season opens this fall.

Barnett With Another Winner: The Recruit Crossbow