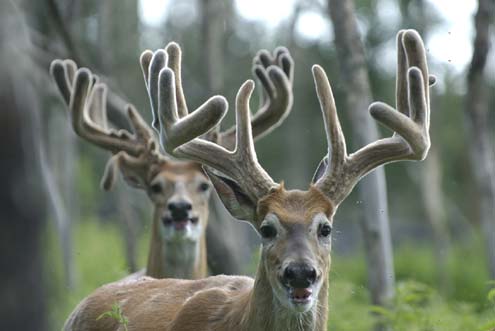 TV personality and lifelong friend Roger Raglin and I were filming a whitetail hunt in Saskatchewan Canada when we encountered a buck standing in a posted field at dusk. It was clear that the buck was special at first glance. It was a main frame 10 with symmetrical drop tines the size of baseball bat handles hanging down from either side. We pulled over and stared at the non-typical monster for a few minutes before he fled. We will never forget him. He was the kind of buck you’ll only see once.

Ever wonder why some bucks are strikingly non-typical while others are perfectly symmetrical. The answer comes in layers but each is interesting. We hunt a farm about 1.5 miles from our house in PA where the bucks, once mature, often have split brow tines. The same is true of an area I hunt in Ohio. You don’t see the trait until the bucks are at least 3 ½ years old but it sure makes them beautiful to look at. These are genetically coded and are passed on through the gene pool. This Illinois buck sports some splits too.

Biologists have long known that leg injuries somehow influence the formation of antlers in a peculiar way. It seems that an injury on the right leg may prompt a deformed antler on the left side. Deer, like us, are bilateral, that is they have mirror left and right sides. You may notice that some bucks with a foot or leg injury may only have a spike on the opposite side while the same side as the injury may be a half-rack six or eight.

Sometimes antlers grow weird in response to an injury. Antlers grow from a pedicle platform located on the skull. Sometimes the antler will be broken during a fight and a chip of the pedicle is chipped off in the process. This damaged pedicle often produces a deformed antler the next year, or maybe across many years. This buck with the random spike growing out from the base of the right antler is a prime example of pedicle damage. 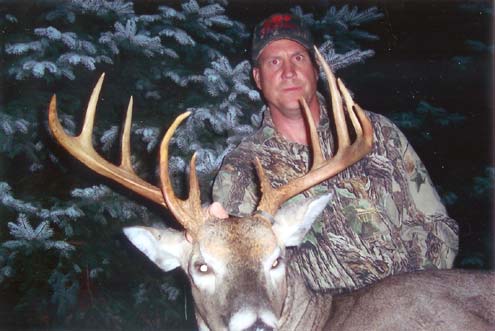 Some bucks just have a predisposition to grow rowdy non-typical antlers. Radical antler design may even be a genetic trait that they share with their offspring. This buck below was brought to one of my wild game dinners on Maryland’s Eastern Shore. The hunter beside me is Billy Crutchfield. He took the buck after finding his shed and focusing in on the buck’s home range. It scored 268+, making it the highest scoring non-typical ever taken on the eastern seaboard. Chances are good that the genetics that spawned this monster are still simmering in that region.

Deer farms grow giant bucks by bringing in the non-typical genetics. They often sell the bucks to hunters by the point, so a non-typical would raise a large sum of cash. This buck scored in the high 200’s and was only 2 1/2 years old. That means this was his second set of antlers he ever grew. 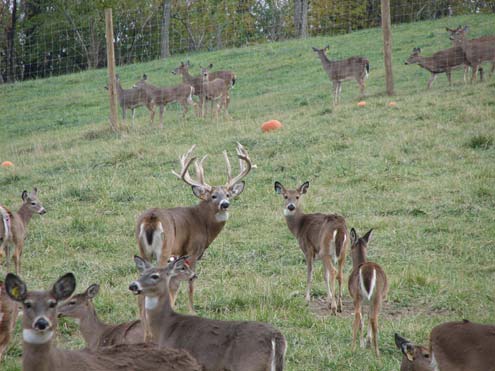 Another reason some bucks develop little stickers and what many guys call acorn points is damage to the antler while it is in velvet. During this grown phase any bump or damage to the rich blood filled velvet can cause a growth to form. This is especially evident after the antler is mostly formed and then it’s damaged. These irregularities are not carried on year after year. It’s believed that a famous buck called hole-in-the -horn buck sustained damage when in the velvet stage and the injury spawned a sizable hole in the antler.

I don’t know about you but I prefer some stickers and weird twists on the bucks I take. It gives them character…and now you how it happens.

Want to get close enough to take your buck, regardless of the what the antlers are like? Be sure and Atsko up before you ever go into the woods.