Part 2: When It Comes To Wolves, State Wildlife Agencies In The Northern Rockies Still Don’t Get It…Or, Do They? 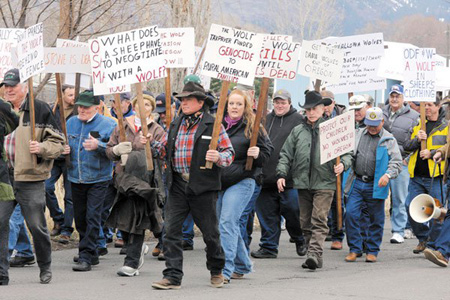 Americans are now realizing that the USFWS mandated Wolf Recovery Project, and even the Endangered Species Act under which the project was justified, have become the greatest crime ever committed against the citizens of this country. The list of co-conspirators will amaze you, including federal agencies, state governors, state wildlife agencies, federal judges, elected officials, extremist environmental groups, taxpayer funded universities, educators, big corporations, national and local media, wealthy environmentalists, academics, and even a few of the large retailers that many sportsmen rely on for the outdoor gear they purchase.

Sportsmen, ranchers, concerned wildlife watchers, rural residents and many others sickened by the tremendous loss of wildlife and the freedom to use the outdoors, all to allow the continued propagation of an invasive wolf subspecies in the Northern Rockies, are now fighting back, and confrontations between citizens and elected officials and wildlife managers are now heating up – and are expected to reach an extreme boiling point as the wolf impact becomes more evident when hunters return to the mountains and valleys this fall and find even less than they have found each of the past seven or eight years. State wildlife agencies will be the first to feel the heat, since it is the wildlife managers and biologists who have been providing all the bogus statistics which keeps hunters buying licenses and permits.

“Wildlife agencies have been infiltrated with agenda driven bureaucrats, hell bent on ending hunting. Nearly half of our wildlife managers are non hunters, who work overtime to devalue our states’ wildlife holdings. Prior to wolf introduction, Idaho and Montana biologists abandoned their fiduciary duties, and walked away from sound scientific data that proved wolves indigenous to the region existed in sustainable numbers. These biologists are now high level managers within the departments. This data is scientific fact, and the departments will be accountable for the fraud they’ve committed,” says Scott Rockholm, the founder and c.e.o. of Save Western Wildlife.

A couple of years back, Rockholm produced the sportsman acclaimed documentary “Yellowstone is Dead”, which looked at how the U.S. Fish and Wildlife Service and the National Park Service purposefully destroyed America’s greatest wildlife treasure. Later this fall, he anticipates finishing his second such documentary, taking a look at the criminal activity taking place within state wildlife agencies.

A lot of “under the table” money has likely been paid out by dozens of environmental groups and organizations to sway the decisions of elected officials to pull back on the reins of anything that would resemble real wolf control – or to ensure that states won’t defy Washington D.C. and exercise their 10th Amendment rights under the U.S. Constitution by ignoring USFWS requirements that wolves be “managed as big game”. Suspect of enjoying some of those environmental group spoils are several governors, a few senators, and one particular appointed federal judge who was always just a bit too cooperative with groups like the Sierra Club, Defenders of Wildlife, and the Alliance for the Wild Rockies. A large chunk of change was spent by green groups to ensure that MT Senator Jon Tester was re-elected, primarily due to his overzealous push for more and larger wilderness areas in the state – which ensure inaccessible core predator areas for wolves, bears and lions. Again, much of the money thrown around by extremist environmental groups, most of which have anti-hunting agendas, comes from taxpayers, in kind of a roundabout way.

Scott Rockholm adds, “Anti-hunting organizations only exist at the behest of the Equal Access to Justice Act. They can only conduct their bidding with the taxpayers footing the bill. They confiscate $600 per hour from the common man, only to turn around and use that money to destroy the common man’s livelihood and way of life.”

One Idaho outdoorsman who has witnessed the USFWS orchestrated annihilation of big game herds in Western Montana and Northern Idaho is Barry Coe. He says the worst of green driven environmental groups is the so-called Natural Resources Defense Council. Coe points out that the phony name of the organization is nothing more than an attempt to hide the fact that the only thing “green” about NRDC is the taxpayer dollars they haul off to the bank.

Coe claims, “They are nothing but a multimillion dollar, tax exempt law firm that does nothing but sue the government and leech E.A.J.A. funds out of the federal coffers. Their CEO makes more than $600,000 a year. The entire federal government passes legislation to ensure tax dollars are funneled into radical groups via pre-manufactured lawsuits based on frivolous administrative procedural failures which creates ‘design to lose’ lawsuits. It is nothing more than bureaucratic money laundering.”

Since the start of the Northern Rockies Wolf Recovery Project during the early 1990s, such lawsuits by environmental groups have gobbled up well in excess of $5-BILLION taxpayer dollars.

Barry Coe is also quick to point out that one of the most blatant criminals associated with the introduction of Canadian wolves into the Northern U.S. Rocky Mountains has been Jamie Rappaport Clark. Under her watch as the Director of the U.S. Fish and Wildlife Service, Clark embezzled $45- to $60-MILLION dollars from Pittman-Robertson funds – money collected in the form of the excise taxes that sportsmen pay on outdoor sporting goods, such as firearms, ammo, archery gear and fishing tackle. By law, these monies are supposed to be used exclusively for game and fish habitat improvement. Clark and the USFWS did a great job of hiding where the money went, but it is suspected that quite a bit was funneled into the wolf project.

Instead of serving prison time for her role in the theft of taxpayer dollars, Clark is now serving as Executive Director of the Defenders of Wildlife, and is being handsomely rewarded with an annual salary of around $300,000.

One thing is for certain, the true cost of the wolf fiasco will never be known. Project leader Ed Bangs was careful not to leave a paper trail identifying how much money was spent on the procurement of those non-indigenous Alberta wolves…nor their true origins, or their subspecies, or how many were actually brought across the border, or if they were each properly and successfully inoculated for the parasites and diseases those wolves were known to be infected with, and which they brought to the U.S. However, that USFWS paper work is mandatory for anyone else looking to bring live wildlife into this country.

Despite all that we now know about all that plagues the criminal fraud known as the Northern Rockies Wolf Recovery Project, Congress and the Department of Justice have ignored the illegal activity, grand larceny, and subterfuge that drove the project – as if it never happened. Allowing the crime to continue makes every elected official and every federal and state wildlife manager with any connection whatsoever to “managing” for the long term propagation of an illegally and unethically transplanted wolf population just as much criminals as those who masterminded and instrumented the planned destruction of the big game herds in Montana, Idaho and Wyoming – which is now spreading like a deadly cancer into Washington and Oregon.

The sportsmen who have financed wildlife conservation for the past 75 or more years have had it with such idiocy. Many have already decided to take care of the problem themselves, and have vowed to shoot every wolf they see…then drive off. Many, many more are expected to also join in such vigilante wolf control.

It has become all too evident that that MT FWP and IDFG either don’t have the knowledge and ability to drastically reduce wolf numbers, or they have been willing accomplices in this crime all along, and are now just stalling for time to allow wolves the opportunity to give big game herds a less than merciful coup de grace.

While the Governors of Montana and Idaho continue to remain too complacent and while MT FWP and IDFG continue to adhere to wolf hunting restrictions that are not reducing wolf numbers fast enough, we will continue to watch big game herds nose dive even deeper into the predator pit. Even though the regulations and longer hunting seasons now in place are significantly better than the seasons and restrictions imposed back during the 2009 season, the changes are still not enough.

Unless more aggressive year around opportunities to reduce these destructive predators are allowed there will continually be even fewer hunting opportunities for the residents of the Northern Rockies. The big game populations of the region are now barely surviving on borrowed time. Most veteran sportsmen, who have spent a great deal of time in the outdoors over the past 30 or 40 years, fully realize that even if suddenly every wolf in the Northern Rockies was no longer on the prowl, it would still take three or four decades before game populations could ever begin to recover.

What makes these Northern Rockies residents more angry than anything else is simply knowing that none of the criminals responsible for this disaster will ever be held accountable. That is the powder keg that will sooner or later explode…but one day it will, most definitely, explode – and that day may come a whole lot sooner than some realize.

ExtremeBeam TAC24 Flashlight Unlike Any Other

ExtremeBeam TAC24 Flashlight Unlike Any Other

Danish Rabbits With The Bow