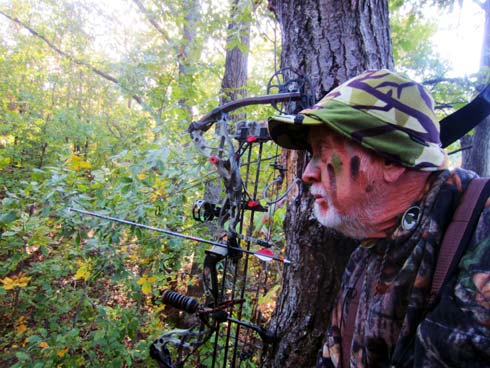 QUIET AS A SHADOW, the burly bruin padded its way down the timbered Wyoming ridge, warily pausing every few steps to lift its blunt snout and taste the evening breeze. Not a dry stick had cracked, not a loose stone had rolled or clattered. The only sounds I heard were my own shallow breathing and the heartbeat drumming in my ears.

For the past two days, from gray dawn until purple dusk, I’d perched in a handy pine overlooking the deadfall where a 55 gallon bait barrel was chained in place and camouflaged by green pine and spruce boughs. On those occasions when the canyon winds shifted, I caught scent of the ripening meat scraps and stale pastries within the steel container. But I knew that what smelled like odiferous garbage to me was actually an open invitation for any opportunistic bear passing downwind of the bait. Few black bears I’ve encountered since arrowing my first in 1971 can resist following their quivering nostrils to the source of most any tantalizing scent that promises a tasty snack.

This bear was no exception. And while I’d already watched and passed up easy shots at half a dozen different bruins while seated in this same hang-on tree stand, it was now the last hour of the last day of my week-long pack-in adventure in the timbered Big Horn Mountains rising skyward just south of the Montana line. And while the approaching animal was not the King Kong of his species, he was several hundred pounds of strength and wildness wrapped within a rippling ebony coat as lush and unblemished as a runway model’s mink coat. A trophy most any bowhunter would be proud to tag. A trophy I’d waited long hours to finally see moving my way at the denouement of a memorable high country setting adventure. A trophy I wanted and felt that I’d earned through patience and persistence.

So when he finally stepped over a moldering log and turned broadside not 15 yards away, I slowly raised my bow and quietly eased to full draw, suddenly calm and confident that my arrow would fly straight and true.

I HONESTLY CAN’T REMEMBER when I first discovered the importance of positive thinking. But I’ve written countless times that once the ABCs of shooting a bow are mastered, bowhunting is 90 to 95 percent mental.

The human mind, I believe, is a shooter’s best friend and worst enemy. At best, it provides the complete confidence necessary to consistently and accurately send well-aimed arrows to their intended target. At worst, it succumbs to gnawing doubt that can sometime seep into thoughts at the moment of truth, turning keen minds to mush and strong muscles to jelly. Call it “buck fever” or “shooter’s panic” or whatever, it is a very real threat we are likely to face at some point. And when it happens, rushing the shot or shooting and hoping you’ll hit your target are surefire recipes for disappointment.

Successful bowhunters never give a second thought to the possibility of missing. They know they’re going to hit the target. And more often than not they do.

In truth, we all miss shots from time to time. No human is perfect. But countless hours of proper practice spent honing shooting skills can make such occasions truly rare. This repetition of practice is what allows us to shoot well without really thinking about the process, to go on auto-pilot, to focus entirely on the spot we want to hit. At this point there is no need to consciously tick off the mechanical steps of drawing an arrow, anchoring, holding, aiming, releasing, and following through. It just happens. One moment we are raising our bow when the buck or bear or bull steps into the open and pauses, and the next instant our arrow’s fletching magically appears exactly where we’re looking.

Such is the exciting essence of physical and mental conditioning.

LEGENDARY ARCHERY COACH Al Henderson, who once led the U.S. team to an Olympic gold medal, also enjoyed bowhunting. His sage advice has helped countless shooters and is as timely today as it was when he first shared it decades ago. Here’s a handful of my favorite Henderson quotes:

Believe it!  These words to the wise can benefit any bowhunter who understands the true value of positive thoughts.

When It Comes To Wolves, State Wildlife Agencies Still Don't Get It...Or, Do They? Part 1