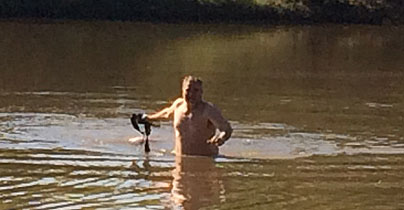 Robbie Cramer came down again to bowhunt for a few days. For the pre-hunt breakfast we drank some coffee and ate pop tarts. Robbie left extra early and was in his ground blind at the Double Cross an hour before daylight’s first rays. During the night it had rained off and had stopped around 5:00am. So things looked good for deer movement.

I hunted one of my food plot blinds and saw a few does and last year’s big 6-point that 3 and 4 years ago was a bomber 8-point. No deer were around when I received a test from Robbie that he had shot a doe and was coming in. I returned to the house and Robbie drove up shortly and brought me up to speed on what had happened.

No deer were in the immediate area for the first hour of daylight. Then Robbie saw several does walking on a trail that could bring them past Robbie’s blind. It did and Robbie took aim and shot a mature doe. All the deer ran away in a group. Robbie waited half and hour and slipped out of the blind to check out the situation. He found a blood trail and slowly followed it. The trail led to the fence 50 yards to the west and turned left for 30 yards and went under the fence.

Robbie looked ahead and saw a deer standing 60 yards away at the edge of some brush. Robbie froze and in a few seconds the deer laid down in the brush. Robbie eased out and contacted me.

We waited 45 minutes and went to the fence where Robbie had last seen the doe.

We didn’t know it yet, but we were about to have one of the most unusual tracking jobs in my experience.

Robbie saw the doe stop by the first group of trees. Robbie used the limited available cover to pull off a good stalk and managed to get a second shot off and it hit the doe. It ran to the west toward a dam and a nice sized pond. We had good cover in that direction so we hurried  after it.

“There is a deer in the water!” Robbie exclaimed. I focused my binoculars on it. It was either walking or swimming slowly. Robbie hurried over to where it was.

When he got there the deer had already expired and was floating in the water of a nice sized stock pond. Years ago, on a hunt with Fred Wallace, his buck had run into the water it sank like a rock. So I didn’t know how long this deer would float, and if it sank it would be very difficult to find.

Robbie tossed his hunting clothes down to his boxers and waded into the very cold water. 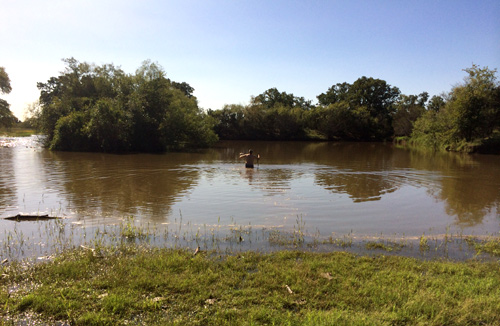 Robbie tied a rope to the deer and pulled it back towards shore. 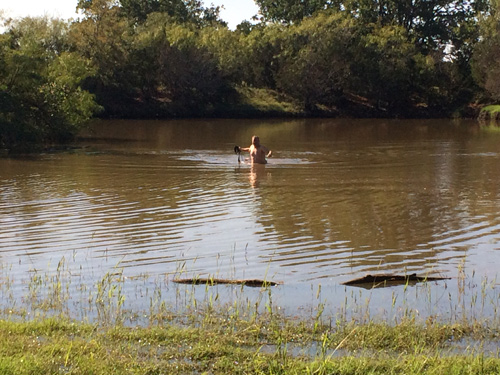 Here Robbie is pulling his doe out of the cold water of the stock pond. 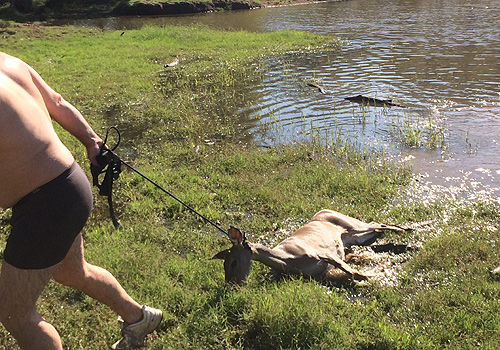 And that capped of an unusual deer hunt. It’s Robbie’s second doe of the 2013 bow season.

And, the answer to the question “do they go to water” is sometimes.

Double the Fun with These Ladder Stands

Don’t Leave Your Feet Out In the Cold This Winter