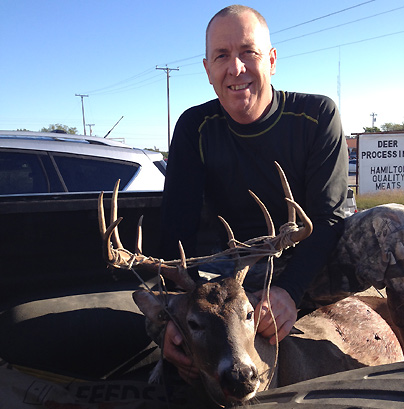 Dwayne bowhunted near a river and before daylight, but in the moonlight of the full moon he saw a nice buck and watched him and 2 other bucks until daylight came into the area. He could see the buck good but inside his ground blind it was too dark to see the pins on his bowsight.

As Dwayne watched the bucks he noticed that one had an object hanging down by his face and as it moved its head the object shined from the low light. Time passed and finally there was enough daylight that Dwayne could see his pins. And when the buck was less than 20 yards and broadside Dwayne drew his bow and aimed carefully.

The arrow passed through the buck it ran into the trees and dissapeared. Dwayne waited half an hour and checked to see what kind of trail he had. The arrow was covered with blood and a good blood trail was on the ground. Dwayne followed it into the nearby trees and saw his buck.

And here is a closer look at the Bling Bling looking thing that Dwayne saw.

Dwayne texted me and told me about his morning bowhunt and included a picture. I texted him back congratulations and asked him to meet me and my hunting buddies at the Aristacats restaurant in Hamilton for breakfast. He did and told us all what had happened.

Dwayne told us, “It’s the most unique buck I’ve ever taken, by far.”

Congratulations Dwayne on your unusual buck.

How To Make Mock Scrapes Right