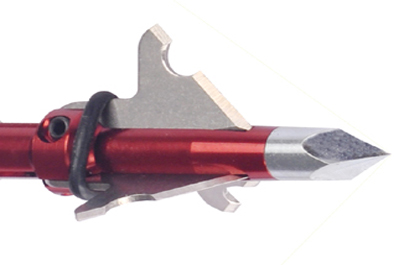 Advancements in the archery world have been very slow over the years when you stop to consider how many years it has taken for the transition from the original longbow and crossbows of ancient times to the modern day compound bows and high tech super fast crossbows of today.

While bows were changing very slowly for the most part there was far less change in the design of the broadheads used on the arrows shot from bows and crossbows over hundreds of years. Yes the material may have changed from flint and stone arrow heads to ones made from metals but the basic two edged or two blade broad head was the standard design used exclusively until the introduction of the three blade, solid metal broadhead.

Each new mechanical broadhead brought with it strengths and weaknesses and hunters would argue as to which manufacturer produced the one that worked the best. Many claims have been made over the years as to who’s mechanical broadhead flew with the most accuracy and which one created to most damaging wound channel and which one was the toughest of the bunch. Many companies have produced mechanical broadheads which have taken their turn as the most popular of them all. Over the years some have proven to be widely accepted and used by hunters but all of them have suffered from one or more defects from time to time which have prevented the more traditional archers from using them. Over the last year however a company called Dead Ringer Hunting has introduced a new line of broadheads called Rampage that have re-defined what a mechanical broad can be.

These new broadheads are called ‘Hybrid’ broadheads due to the fact that they offer the best features of both fixed and mechanical broadheads. These ‘Hybrid’ heads have the ability to cut-on-contact like a fixed blade and then open to a wide cutting surface like a mechanical head. This new line of broadheads are beginning to be recognized as the answer to what hunters have been looking for all along. These new broadheads satisfy the traditional archer’s desire for a guaranteed cutting wound on contact and the bowhunters who want field tip type flight with the wide wound channels of a mechanical. The Dead Ringer Hunting broadheads are available in both two and three blade configurations and all fly with field tip accuracy.

In addition to being accurate, they are extremely tough. Rampage broadheads are made with aircraft grade aluminum ferrules and feature case hardened steel trocar tips and razor sharp blades made of super strong spring stainless steel. They also have stronger more durable O-rings that don’t break like the O-rings on many other mechanical heads do. With cutting edges from 1.5” to 2” they produce a huge wound channel. Dead Ringer Hunting broadheads have already been proven in the field to be devastating on many types of big game from whitetail deer to large African game animals.

I strongly recommend that you don’t take anyone’s word for it, but instead try any one of the new Dead Ringer Hunting broadheads and see for yourself why so many hunters are excited about the results they have been getting from using these new ‘Hybrid’ broadheads. I am confident you won’t be disappointed. Be safe and good hunting.

An unsolicited Letter from Ty Weaver:

Dead Ringer makes this statement on their website; “The most devastating and durable broadheads the hunting world has ever seen.  Incorporating ground breaking innovation and ample feedback from professional hunters and consumers alike, these new broadheads cut like a fixed blade, while delivering field tip accuracy.  No other broadhead on the market can match these bone-shattering, flesh-ripping killers.”  Well, I can tell you,  It’s true!

Dad and I went out meat hunting like we always do at the start of the season to put yum yums in the freezer so Mom can perform her awesome cooking magic.

We are not fans of expandables but we thought we would give the Carbon Express PileDriver Pass Thru Extreme  tipped with 100 grain Dead Ringer Rampage 2s a shot to boost our confidence. We already had an adrenaline rush from the PileDrivers based on their accuracy and shear penetration of our targets, amazing!

The Rampage 2s did fly like a field point but will they really hold up and kill game better than other heads? We were up early and Dad put a PileDriver tipped with Rampage 2 in his quiver and pats me on the shoulder “Doe at 6:30PM!” I smile and point to my quiver full and said “Monster buck and pigs!”

The weather was humid and all was quiet. At 6:30 pm I text Dad, “Any luck?” I received a text back at 6:35, “Just SMASHED a doe – hard quartering away -PileDriver in ground – blood explosion – deer down!”

I was ready to text back when a twig snapped. Not a monster buck but a nice 7 point at 25 yards perfect broadside. My Bear Motive 6 sent a PileDriver and Rampage 2 through the crease behind the shoulder……..what just happened?  The buck dropped in its tracks like it was spine shot. It tried to get up but  just rolled over and kicked, lights out! I started to text Dad but I was so excited that I just called him and told him what happened. He said “You must have shot high”.

No way, the arrow entered slightly below center! Dad said, “Well then the shot must have deflected up on impact or something. Sit tight, I’m coming to check this out”. ” He said.

Dad arrived at dark and we walked up to the buck. The buck was surrounded by blood. I was going to take a photo but it was too gruesome.  The entry hole was perfect so we rolled  the buck over and the exit hole was even lower but massive.  No spine shot on this buck. I don’t know how to explain what happened as I have never seen anything like this before. Awesome performance!

Dad retrieved his arrow so we could check broadhead durability. The Rampage 2 held up great, it entered at the last rib and blew out the shoulder and piledrived the ground.  We never found my arrow. I think the Bear Motive 6 sent it to China!

To see the broadheads that are causing the stir, go to: Dead Ringer Hunting

For more please go to: Dead On

Another Buck Solution from Atsko

How To Make Mock Scrapes Right