Gene Curry Puts The Guts Back In My Bear Bow

Gene Curry took my new Maxima RED arrows and went to the Paper Tuner. After he shot them he checked the arrow’s tears. Once again they were left tears. 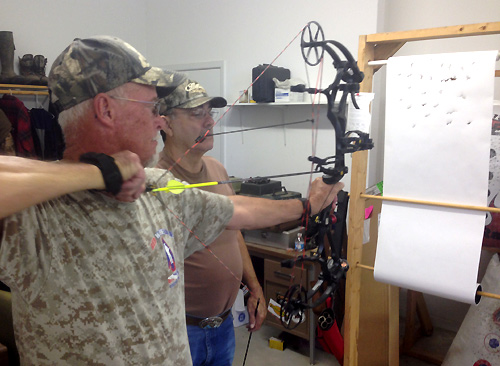 He took a straight rod and lined it up with the cables and bowstring. The Bear Empire is a split limb bow and Gene showed me that the top cam and bowstring were out of alignment. The bowstring should fit in the groove of the cam without touching the side of the cam. But that was not happening, the bowstring was slapping the side of the cam and bouncing into the groove. That’s not good. It makes the arrow flight unpredictable, and unpredictable i0 not what I want when I shoot at whitetails. He took by bow (an Empire from Bear Archery) to the the Bow Press and tightened it in place. 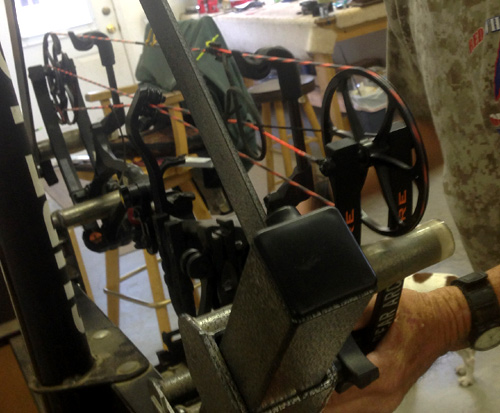 To get the bowstring to align exactly into the top cam’s groove Gene made several slight and careful adjustments to the bowstring and top limbs until he thought it looked correct. Then he got the rod and checked the alignment and the bowstring fit perfectly in the center of the cam groove.

Gene took my bow out of the bow press and shot my arrows through the Paper Tunner again. Now the hole in the paper was a perfectly round hole. Nice.

He handed me the bow and told me to shoot it so he could watch the arrow flight. The arrow flight was smooth and straight … and fast. And my arrows grouped tightly. The target had several round, black bullseyes on it and Gene wanted me to shoot a different bullseye on every shot. I did and then shot at 10, 15 and 20 yards.

I was surprised that my bowsight didn’t require any re-sighting. Gene explained that when he originally set up my Empire it was tuned exactly the way it was now.

The problem came from not taking proper care of the bow. I have to admit that because I take my bows  to different places to hunts they get bumped around in people’s vehicles and also because most hunting houses have no place to hang a bow properly. And, frankly, I’m not so careful with things in general. I’m not purposefully abusive, mind you, but I am kind of a klutz with things. So I definitely will be more careful with my bows in the future.

Thanks Gene for all your help.

ABOUT MY BEAR ARCHERY EMPIRE

I really like my Empire bow from Bear Archery. It is absolutely the quietest bow I’ve ever shot and it is common, when someone is around when I shoot it, that they remark about how quiet the bow is. They do that because it is quieter than other bows.

The Empire is very smooth to draw and the arrow flight is perfect … and fast. It’s proven itself to me by giving me accurate shots and short bloodtrails on bowhunts for whitetail deer, wild turkey and wild hogs. This is an exceptional bow and I recommend it to anyone interested in a quality bow at a fair price.

Join the Tribe on Facebook to Win a Tribe Bow!