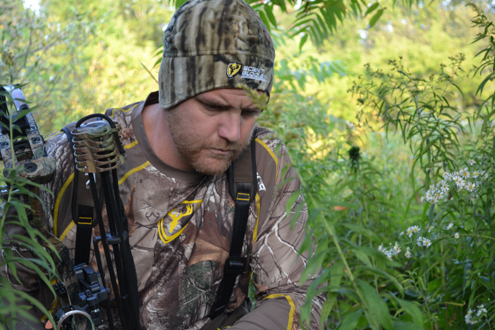 Trailing a deer can lead the hunter into sacred ground. be sure to remain scent free.

Gazing at a trail camera pic showing an extreme closeup of a deer’s nostrils, it finally dawned on me. For several seasons, before I became a scent control disciple, my trail cameras would ignite with fresh deer photos, including mature bucks, soon after I hung them, only to peter out to young bucks and small does by the time I checked the card again. Assuming the deer had moved on to a new location, I would chase them with my camera, hanging and re-hanging, continuing the cycle of pics of good deer for the first day or so, then a downhill slide leading to the occasional glimpse of a doe or fawn. Something was wrong; I knew mature bucks were around, were they really changing their feeding and bedding habits this often? After years of research, observation, and discussions, I came to the conclusion that the deer were patterning me. The deer would hear me making all sorts of racket hanging the camera, then safely after I left, they would come in to investigate, hence the large volume of a variety of deer. Not long after, the lingering human scent would convince them that I was up to no good, and the animals would stay clear of that area.

Recently, at a scent control seminar I was giving at the local Cabela’s store, a skeptical customer raised his hand and said, “This scent control gear is a big waste of money. I just play the wind.”

I humbly replied, “You’re never wrong playing the wind, but you could possibly not be completely right either. Think about what happens when you leave. The deer act like dogs… they sniff everything. Chances are good that they hear you in the woods and when it is safe, will come in and investigate, smelling everything you left behind.” The man was all ears, and by the end of the seminar, I know another scent control disciple had joined the club. I told the man by following my advice, this fall may be his best yet.

How to Become Scent Free:

Before going any further, let’s discuss in a nutshell how to become scent free. I prefer using ScentBlocker and Scent Shield products from Robinson Outdoor Products. (www.robinsonoutdoors.com) There are several scent control products available but I’m really happy with the results I get from ScentBlocker. ScentBlocker takes a four layer approach to human scent control. Ideally, a scent free hunter will have a very high vegetable and fruit diet, battling the internal layer of scent control naturally with odor eating chlorophyll rich foods.  Also, completely natural internal deodorant pills can be purchased to up the help win the war. ScentBlocker makes all sorts of hygienic products from soaps and shampoos to skin conditioners and deodorants- all designed to help the hunter remain scent free. Once the hunter himself is scent free, it’s time to put on some odor eliminating adsorbing clothing. Activated garments bond with scent molecule and adsorb them, clinging to the renegade stink until cycled through a laundry dryer. After that, I spray everything liberally with their Ti4 spray. If my diet, shower, and clothing didn’t catch something, the Ti4 will.

It is important for scent-free hunters to constantly strive to be invisible to the deer. Quite often overlooked, entrance and exit routes are important in the quest for stealth. Obviously, we do not want to make a bunch of noise accessing our stands. Too many foreign sounds may put the deer on alert, and cause them to keep to the security of their beds until well after sunset. Many hunters are now entering their morning stands AFTER first light, so they can see where they are stepping and be on the watch for moving deer. How often have we hunters carefully snuck to our stands only to hear a deer alarm blowing at us from the darkness? Along with these logical access strategies, it is important to remain scent free. Any rogue wind blowing around will carry human scent a long way downwind from the faint trail the hunter followed to his stand. The same is true after the hunt. After many hungry, frozen hours on stand the sunset is often a welcome sight, but it is important to not hurry back to the truck, but rather take a logical way out, playing the wind and keeping quiet.

Often, when deer are spooked in the early morning hours, they make it a point to get back into their bedding or security cover earlier, often convincing the hunter they’ve vacated the property. The same is true of evening hunts. When deer are scared by a hunter leaving for his truck, they’ll stay in the security cover longer, avoiding the hunter altogether. So, in a nutshell, when it comes to entering and exiting stands, be scent free, use plenty of scent eliminating boot spray, and take all the time in the world. An ounce of prevention could be worth a pound of antler in this case.

Scent free hunting is crucial. Not only do deer wind stinky hunters but as I mentioned before, they’ll pick up on the human scent long after the hunt is over. The wind acts like flowing water and often pools and collects in lower areas. This same wind, carrying a hunter’s scent, will spread the noxious odor all over the deer woods, concentrating it in lower areas. What if there isn’t a lot of wind? Then the human stink will collect at the base of the treestand! Either way, long after a hunt the signs of human pressure are still alive and well.

Also, when I mentioned to the gentleman at my seminar that playing the wind is never wrong, there are circumstances where it isn’t ideal either. Most hunters play it safe, and think “selfishly” when setting up their treestands. They only think of the wind that is good for them, and not what wind a buck may want to use. This is a whole other controversial topic in itself, but in a nutshell, some experts swear deer like to travel with their wind slapping them across the face. If a particular buck does like to have the wind in his face when he’s out cruising for does, the chances are good he’ll also wind the hunter long before he’s ever seen. Like I said, a whole different topic that we will cover eventually, but certainly for now… food for thought.

Just because the season has arrived doesn’t mean the scouting should cease. In fact, many dedicated hunters scout way more than they hunt. Granted, most of their scouting comes in the off season, but if these guys aren’t seeing the deer like they want to- they’re strapping on the hiking boots and finding fresh sign. Once again, scent control is crucial here. Often the only fresh sign will be near a bedding area. If a mature buck detects human presence near his sacred bedroom, he’ll become pretty edgy and often look for a safer residence. A great time to scout is in a rainstorm, where noise and movement will be easier concealed, and any scent residue will be washed away at a much quicker rate. When scouting during the season, don’t make the mistake many hunters have made and go out unarmed. Once I had a great eye to eye encounter with a 150” Illinois 10pt, which ended with him calmly walking away because I had no weapon. Lesson learned.

Unless you’re tracking the biggest buck on the farm, scent control is important here too. Even if you’re on the blood trail of Mr. Big, I’d still play it safe. If anything, you don’t want to scare all the rest of the deer in the county to the neighbors. Remember to regularly douse boots with scent eliminator and try not to touch anything with body or hands. Often many great spots are ruined by excited hunters on the trail of a doe or small buck. Recovering these deer is of course the utmost importance, but don’t booger up a buck spot by doing it in a sloppy manner.

These are just a few examples of why scent control is important. There are many more reasons why we really suggest the hunter try to remain invisible. Scent control does not have to be expensive and if used properly, the money spent on it is a wise investment. However, effective scent control does require a lot of determination and commitment from the hunter. To learn more about Robinson Outdoor Products or to purchase anything I discussed, please visit www.robinsonoutdoors.com. So be safe this fall, hunt scent free, and have fun!

Barebow Book for the Avid Archer