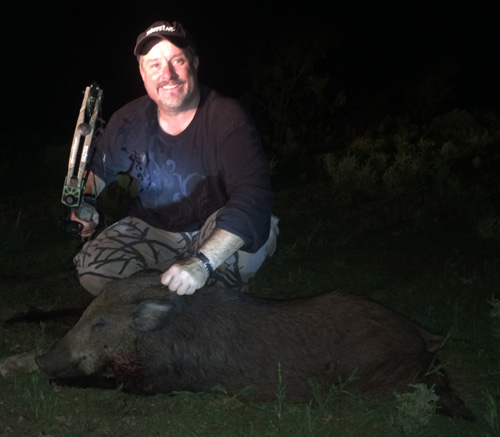 Saturday morning was a bust for me, I didn’t see a single deer. The weather was hot and muggy, I think even my toenails were sweating. Robbie saw a dozen deer, one of which was a young, but good looking 8-point.

Justin Red hunted one of his new stands.  On Friday during his afternoon hunt a doe and button buck came into his area. They were skittish and stomped their feet. In a few minute they relaxed and Justin got a chance to shoot the doe. It went down in a few steps.

When Robbie was done with his afternoon hunt he walked through a partially open area  on the way to his pickup. He walked up on a group of wild hogs. They were close enough for a bow shot so Robbie drew, aimed and shot one. The hog ran about 40 yards and piled up loudly in some tall broom weeds. He tested me and I drove over and we recovered the hog. I forgot my real camera and took this pic with my iPhone.

On Saturday morning new lease guest member Colt shot a big doe. He already had it butchered before I saw it and couldn’t get a picture. Robbie and I saw a few deer during out morning hunts too.

Robbie drove home and picked up his girlfriend Jody and returned with her and they both went on the afternoon hunt. Robbie was the hunter and Jody came to watch. But nothing moved in their area. Mine neither.

I check my Food Plot game gamera almost every day and I am seeing the buckI call Number 9 come through while it is dark. So I’m gonna hang in at this spot. I feel the chances are good that he can show up early in the morning and be around at shooting light.

Sunday morning I was in my blind early. The sky was overcast and it was very dark. As a little daylight eked into the area I saw a large bodied deer that had “buck posture.”  I made out a shadowy big rack with my binoculars. It was the Number 9 buck that I’m looking for this year. He browsed briefly in my food plot. He was under 20 yards away but there was not enough daylight to take a shot. Then he walked over to a scrape 45 yards away and pawed the ground. As he left to the north west the daylight improved and I could see him better.

Afterward, I saw a total of 13 does. Here are some that came to my food plot.

Deer activity was also to the east, along the edge of the gulch 90 yards away. The woods there has acorns as well as natural browse that deer like.

Robbie and Jody saw one doe. When they came in from the hunt they returned home. Sunday afternoon I sas 4 does the last 15 minutes of daylight.

Maybe #9 will show up Monday morning. My gut feeling is that’s it’s just a matter of time. I just have to hang in there. And I will.