Out of Step or On Target? 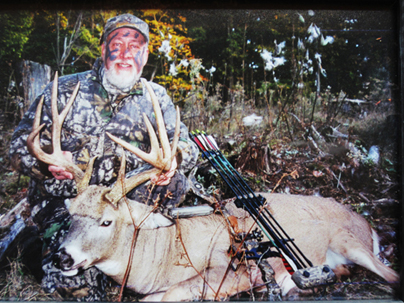 LET ME BEGIN WITH A CANDID ADMISSION: I’m hopelessly out of touch with the so-called younger generation. And for me, now rapidly approaching my 73rd birthday, the “younger generation” includes Baby Boomers, Gen-X and Gen-Yers, Millennials, and virtually everyone else who’s currently living south of eldercare but north of baby diapers.

My bowhunting heroes are still Fred Bear and Howard Hill. My all-time favorite hunting bow is still a custom made Black Widow recurve, crafted for me by the Wilson Brothers 40-plus years ago. And given the choice, I still prefer to sharpen my own broadheads with a file, oiled stone, and leather strop, testing each personally honed edge by dry-shaving hair off my forearms.

Finally, I long for the time when I was still a purely instinctive shooter, when my arrows magically flew where I looked without me ever giving a single thought to yardages or the need to fumble with a rangefinder before drawing an arrow and picking a pin.

Anyway, I felt it necessary to offer this brief bit of personal perspective before mounting my metaphorical soapbox (and preaching to the choir, as some would say) and asking a few questions that have been bugging me for several years now:

*Is anyone else bothered by a current generation of bowhunting’s ostentatious young guns, guys and gals who march to the throbbing beat of a much different drummer who’s been body-pierced and tattooed and pounds out a heavy metal rock beat theme song that’s loud enough to spook deer in every surrounding state? Ted Nugent singing about “Fred Bear” was plenty good enough for me, thank you.

*Is anyone else troubled by the ego-driven, look-at-me exhibitionists armed with a video cam and a bow. You know, those in-your-face clowns who find a sponsor and proceed to “whack” or “stick” or “smoke” or “hammer” a variety of wildlife along with more than a few game farm critters. These are the same leering jerks who call themselves bowhunting “thugs” or “assassins” or “freaks” or “hit men” or “headhunters” or the “bloody arrow” gang or some such disrespectful nonsense. They shoot something and grin their goofy grins, pump their fists, high-five cameramen, dance a jig while flashing the thumbs-up sign, and generally act as if their IQ is substantially less than their bow’s draw weight. Being rightfully excited is one thing; acting idiotic in front of a camera is something else entirely.

*Is anyone else bothered by the camera shots that linger a bit too long on bleeding, dying animals as they struggle to live? And what about those slow-motion impact shots that are replayed whether the arrow flies true or hits “a bit high” or “too far back,” while the shooter breathlessly tells viewers how pumped he is at causing that ol’ buck to “take a dirt nap” within sight of his stand. And then there’s the recovery footage complete with counting points, estimating a green score, and proclaiming the deer a “Poper” or “Booner” for sure, not that the mouthy hunter will bother to enter the trophy in either record book.

*Is anyone else weary of vapid television shows that amount to little more than wildlife snuff films, where animal after animal is duly arrowed with no real sense of storyline and plot, of time and place? Seems more like egotistical exploitation than outdoor adventure entertainment to me. And what’s wrong with providing helpful information and advice along with the hunting action? Just asking.

*And, finally, is anyone else tired of seeing the shameless promotion of this or that brand of camouflage clothing, hunting bow, arrow, broadhead and boots, deer scent and masking scent and calls, video cameras, and everything else mentioned that’s designed to appease current or potential sponsors? Whatever happened to subtlety, anyway? It’s enough to make me wonder what happened to creativity, imagination, and good old-fashioned respect for the animals and viewers, much less non-hunting channel surfers who just happen to see the flickering images and are disgusted by the on-air garbage they see.

PLEASE DON’T GET ME WRONG, because there are some excellent, high-quality hunting shows available on the outdoor channels. A few of my favorites involve friends of mine, all experienced bowhunters, men and women alike. They’ve been successful for decades and deserve the recognition they’ve earned. What all have in common is an obvious respect for the animals they pursue and a burning passion for the sport they plainly love. Simply put, they’re genuinely enthused, have fun, and it shows. Best of all, that natural enthusiasm is contagious. There’s nothing faked or forced about it.

The value of quality videos and televised bowhunting shows cannot be overstated. Their instructional and educational benefits are obvious. Also important is the entertainment element, because all bowhunters I know are dreamers, and what dreamer doesn’t like to experience the vicarious thrill of tagging along on hunts they’ll likely never make in places they’ll probably never visit? It’s not the same as doing it yourself, but it’s arguably the next best thing.

It was Papa Bear himself who said something worth remembering by all bowhunters, especially those attention-seeking individuals who want to follow in his size 13 boot tracks and represent a sport he helped to popularize: “Go afield with a good attitude, with respect for the animals we hunt, and for the fields and forests within which we walk. Immerse yourself in the outdoor experience. It’ll cleanse your soul and make you a better person.”

End of this month’s sermon from the Book of James.