Robbie and the 3 Yard Doe 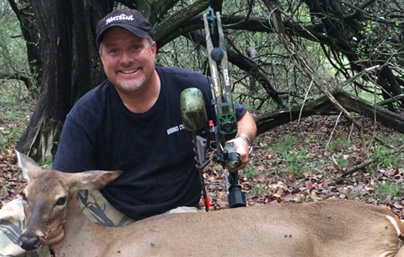 My deerhunting buddy Robbie Cramer came down to hunt early Thursday morning. He went to hunt at a stand we call Double Cross. We had a light rain after daylight and 40 minutes later Robbie saw a group of does walking to his left. Then he heard a deer jump over the nearby fence behind him.

Robbie has a Double Bull ground blind set up in this area, it’s wedged into some cedar trees and is nicely camouflaged by them.

Robbie had the windows closed in the direction he heard the deer so he peeked through a slit in a side window. The doe was coming his way and would probably pass to Robbie’s right. So he slid down the shooting window on that side and removed his bow from it’s hook and came to full draw. But the doe came through the shooting area to fast.

Robbie had a small shooting window open on the next side of the blind. And the doe turned so it was in the window and stopped, looking ahead. However, several limbs and young trees blocked the shot.

And just then the doe noticed the blind and gave it her full attention … and walked toward the shooting window. When the doe cleared the limbs that had been in the way it stopped 3 yards from Robbie — who just happened to still be at full draw.

Robbie took aim and released the arrow. Hard hit, the doe jerked around and ran into the thick brush and trees to the south.  Then he texted me to see if I wanted to be in on the recovery. I did, of course, and drove out to the area.

A good blood trail led us through the thick brush right to the doe.

One second after I took a couple of pictures of Robbie and his doe it started pouring rain and we got soaked. But that’s just part of it and I wouldn’t have had it any other way.

We changed to dry clothes and drove to Whalay’s Deer Processing in Hamilton and Robbie and B.J. worked out how much sausage and the kind of cuts of meat to make.

The Wait is Over – DuraCoat in an AEROSOL!

Another Buck Solution from Atsko