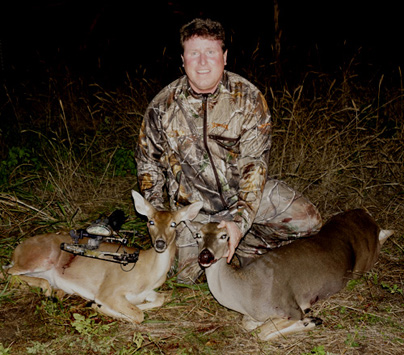 One day before the archery season for deer opened my hunting buddies John Askew and Justin came down and set up John’s travel trailer and got organized for this year’s bowhunts. It’s a long season because we can hunt with the bow from last weekend until the first weekend in January.

Afterward, we drove to Gatesville and had dinner at the new restaurant The Pharmacy Gastropub.  It was very good and the atmosphere is kinda New Yorkish.

My alarm wert off at 5:00am. Hmmm, it was raining hard and it continued until nearly 8:00. Bryant Askew had come in and he and Justin braved the rain.However, John and I both have been there, done that with hunting in a hard rain so we drank coffee and visited until the rain-hunters came in empty handed. We drove to Aristocats Cafe in Hamilton and ate a whole lot of breakfast.

Deer were moving after the rain and everyone was in a stand extra early. I saw some does and the Wrench Head buck. Justin and Bryant saw deer also but the 3 of us had no shot opportunities.

Meanwhile, John hunted the stand in his Rock Ledge area. He saw deer movement uphill from his stand on two different trails. Later 4 does came from his right, walking down a train that brought the deer 10 yards from his tripod stand. John is one of the stillest deerhunters I’ve ever known. He can sit like a rock and move slowly you can’t tell he moved. That quality paid off for him as he drew slowly and took aim at the largest doe.

John took his shot. The doe ran up the hill and John heard it go down behind some deadfall trees.

Just then John noticed that the other deer were still here and looking toward the shot doe. Another large doe was standing to John’s right so he slowly turned his tripod seat toget in the right shooting angle. Then he carefully got an arrow from his bowquiver and slowly nocked it. He moved so slowly he went unnoticed by the 3 deer in front of him.

He took aim when he was at full draw and took his second shot.Perfect. The doe ran past John and piled up in 30 yards.

He walked up the hill and located the first doe and drug it over to the blow down trees and left it for the boys to bring on down. Then he texted me and I drove over to his stand.

When Bryant and Justin came they pulled the does to their ATV and we drove a little ways to a dry spot in the cut cornfield and took pictures.

I called Whaley Deer Processing to let B.J. know we were bringing him two does. First we had to gut the does and load them up. 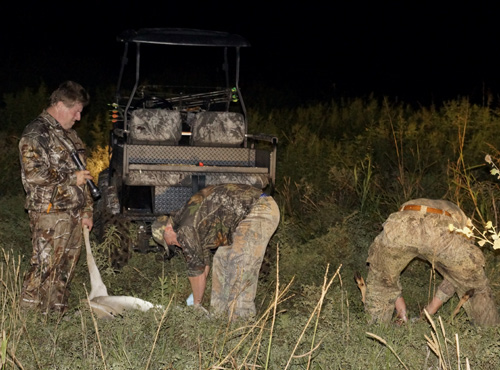 After delivering the does to Whalay’s in Hamilton we ate at Ortegas mexican restaurant. And day number one was a wrap.

“Last year I bought a new Mathews bow. And I have to tell you that without it I would not have pulled off getting the second doe. Honestly, when I shot the bow was quiet enough that the other 3 deer 10 that were yards away did not spook. And I was able to get another arrow out and shoot the second doe.”

“I also used Carton Express Maxima Hunter arrows and Swacker broadheads. What a swell start to this year’s deer season.”

Barebow Book for the Avid Archer

The Pope & Young Club - Much More than Bowhunting Record Keepers