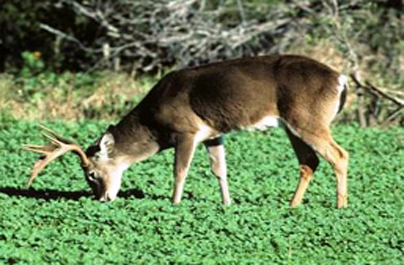 Chronic wasting disease (CWD) has been scary from the get go. Here is a deer disease caused by a prion that is hard to describe, impossible to kill, with a potential to kill lots of deer. So far that hasn’t happened, but biologists who study such brain diseases and researchers who study similar spongiform diseases such as Creutzfeldt-Jakob disease are very nervous about CWD. This is not only because it has the potential to hurt deer but more so because of the potential to kill humans.

Lets look at the scary things about CWD and especially the infectious agents that cause CWD (the prions). CWD was first found in deer in research pens adjacent to sheep that had another brain spongiform disease, scrapie. How did the deer get it? Did the infectious agent that causes scabies change enough to somehow infect deer and lead to CWD? We may never know, but it is possible Then there is the fact that these prions seem to be indestructible. Chemicals don’t seem to phase them. High, really high, heat doesn’t kill them. You can have infected deer in a pen, remove them, chemically treat the pen, wait a year, put deer back in there and within a month, the healthy deer have prions. They have CWD.

How long do the prions remain viable in the soil? We really don’t know. It could be five years, it could be 50 years. Here’s another question. How long can the prions exist in a deer before the deer starts to show symptoms of CWD. Three years? Five years? Seven years? We don’t know, but we do know that it can be several years. How about this fact. At first we thought the prions were just found in nervous tissue (brain, etc.), but now we know they are also in muscle tissue. We eat deer muscle tissue all the time.

So there is a lot we do not know about prions, and this makes CWD a bit scary. We know that there is some type of molecular barrier that keeps some other animals from getting the CWD prions from deer. Elk obviously don’t have that barrier because they get the disease, but moose seem to have some type of barrier that doesn’t totally protect them (because a few have been been found with CWD), but it seems to protect most. And as far as we know humans don’t get CWD. But can the prions change and “jump” that barrier? We don’t know.

Hunters have eaten many thousands of CWD positive deer and elk in Colorado, Wyoming, and other states and provinces. Will the prions we eat sit there in our bodies for years, then infect us and lead to fatal outcomes that victims who have Creutzfeldt-Jakob disease show? We don’t know.

Then there is the whole deal with deer and elk farms. We know they are involved in spreading CWD, both from one farm to another, and from farms to the wild. We know that. Maybe that is why the Wisconsin DNR has double fenced game farms that have been shut down and all deer there killed. Two years ago CWD was found on a deer farm in Missouri. One year later it was found in the wild less than a mile from that farm. Similar scenarios have popped up over the years in other states and provinces, with the latest being last year on a deer farm in Pennsylvania. To make that situation worse, the contaminated farm sold deer to other Pennsylvania deer farms, leading to a large quarantine, but too late, as deer in the wild have popped up near several contaminated deer farms in Pennsylvania.

However, not all outbreaks can be directly linked to deer farms. West Virginia has CWD in their Eastern Panhandle, where no active deer farms occur (though some suggest there was a small one there in the 1990’s). Same in New York, where CWD was found in the wild in a few deer. One suggestion was that a taxidermist worked in a barn and may have had a CWD positive skull there, and the prions got on the floor, and then rescued fawns were kept there and released in the wild. Who knows if that is how CWD appeared in New York. The good news is that no further wild deer in that area have been found with CWD.

There was also the situation in New Mexico where it appeared with no deer farm around. And the same in the center of Utah. Like I said. This stuff is a really complex disease with twists and turns popping up all the time.

In Wisconsin, where CWD was first found in a game farm and then in the wild in 2002, the approach was to shoot deer where CWD was found. That has not slowed the spread. Where there was once 8 percent of the bucks with CWD, there is now 20 percent. Where there was once 3-4 percent incidence in adult does, there is now a 9 percent incidence. Older deer have even more CWD. The estimate is that Wisconsin deer over 2.5 years of age have a 27 percent incidence. And it is still popping up there in deer far removed where it had been previously found. How is it getting there? Not sure.

And that leads me to the reason I wrote this column. New research done at the National Wildlife Health Center in Wisconsin introduces another scary concept about how CWD may be spread. That research shows that exposure to the prions is far more enhanced than we ever thought. We knew that prions were passed on to soil and other deer via saliva and urine. Well, now we know that there is another, very serious, route of exposure that could impact domestic and wild animals, and maybe humans.

These researchers demonstrated that prions can be taken up from the soil by plants such as alfalfa and corn. They also took tainted stems from these plants and when injected into mice, they got infected.

So, the latest question is whether these prions in plants can infect other plant eaters such as cattle. We already know that deer CWD prions infect elk. Can they jump to cattle and other animals (us?) that eat plants? Probably not, but then again, maybe. What is troubling here is that we keep learning new things about these prions and what they can do. Note. The CWD prions are similar in many ways to those found in other diseases such as scrapie in sheep and goats, mad cow disease in cattle, and Creutzfeldt-Jakob disease in humans.

We’ve believed that there is an apparent molecular species barrier that prevents CWD prions from infecting cows and humans, but the finding of prions in plants increases exposure of humans and cattle a great deal. This discovery caused one veterinarian to note that this “has big implications for our agricultural economy, not just in this state (Wisconsin), but all across the country.” How will this all play out? Only time will tell, but there are alarm bells going of in infectious disease experts minds all over the country. 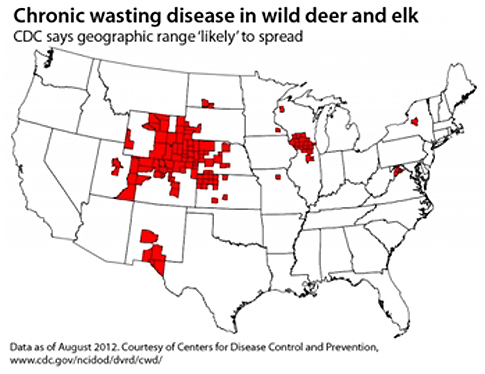 A map showing where we have CWD shows an ever-growing part of the country with CWD. It’s moved from Wisconsin into northern Illinois and is now moving south there. It’s moving east in Nebraska. Areas with CWD in Wyoming, Colorado, and Utah are spreading all the time. Northwestern Kansas now has CWD. West Texas now has it, as it spread from New Mexico. Virginia has it, probably gotten from eastern West Virginia.

Humans and cattle don’t get CWD, at least not in the form that deer have. That is the reality of CWD today. However, we now have prions spreading to plants that cattle eat, and some of those agriculture plants, when processed, end up on our table for dinner. Given all that we do know about prions, and all that we don’t know about prions, this is disturbing to say the least. 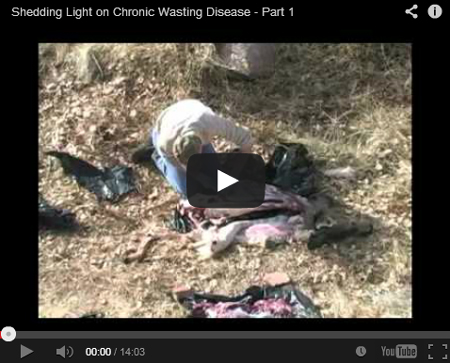 Feed Your Game with the New Pile Driv'r