by Luke Clayton
in Bowhunting Posts
0 0
0 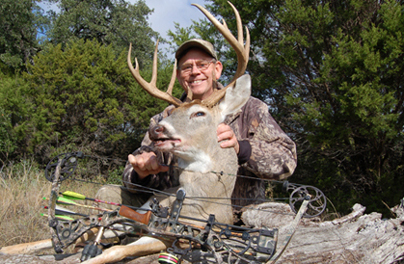 I feel truly blessed to be ‘on duty’ anytime I pick up a hunting bow or fishing rod. I have a tendency to get a bit nostalgic when I’m spending time alone and this  column is coming to you via lap top computer from my tent camp on the banks of the Brazos River at Dale River Ranch.

I’ve been bow hunting deer and have seen a couple of wall hangers, but, as of this evening, have not loosed an arrow. I’m in my early sixties, and I have most certainly reached the stage in my hunting career where just ‘being there’ is my primary objective. I’ve had more than my share of great memories in the deer woods and around deer camps in a half century of hunting deer.

I’ll never forget my first real deer hunt when I was 11. My brother-in-law invited me to join him and a veteran deer hunter in Red River County in northeast Texas, not far from our home. Earlier that day, we went to a camp that was set up by a group of ‘sure nuff’ deer hunters. It was in the early sixties and I’m sure many of these guys were WWII veterans. They had a couple of big Army surplus wall tents set up and, on the meat pole, hung three whitetail bucks. This was my first time to be ‘in camp’ and even though the event took place over 40 years ago, I will never forget the excitement I felt looking at those big racked bucks. This was the decisive moment when I became a lifelong deer hunter. Early the next morning, I sat on the limb of a big pine tree with my .410 shotgun loaded with a rifled slug. I was finally deer hunting! After three hours of watching wood peckers and squirrels, I was picked up by my brother-in-law and his friend. There were precious few whitetail deer in East Texas in those years and it took a good hunter to harvest one.

“Just around this bend,” the veteran deer hunter said, “I’ve been watching three does and a little forkhorn for several days.”

Sure enough, as the ’56 Crown Victoria Ford sedan rounded the bend in the logging road, we spotted deer, just where he said they would be. I WAS impressed.

Since that fall, back in ’61, I have had the opportunity to enjoy many, many deer camps with some mighty fine folks that share my passion for hunting whitetail.

As a teenager, I was allowed to travel down to Waller County in southeast Texas to hunt each fall with “Poppa Dinkins.” Oscar Dinkins was a lifelong deer hunter and cattle rancher. He was 80 years young when I first began hunting with him. On the gun rack in his house was an old 10 gauge Damascus barrel shotgun; the one he had used to collect the 36 fine whitetail shoulder mounts that graced the walls of his den. From the age of 14 through 18, I spent a week with Poppa on his ranch every fall, hunting deer and soaking up the woods lore that only someone from his era could have known. A slightly built man that was as tough as boot leather, Poppa told of the time he went into the den of a red wolf female which had been killed to retrieve the pups, which he raised and later released back into the wild.

While in his mid eighties, Poppa and his ranch foreman, John, found a big eight pointer that had been caught in a hog wire fence on the ranch. The buck was in bad shape and was transported back to a corral close to Poppa’s house to be cared for. After doctoring the buck for several days, and just before his release, the buck gored Poppa in the mid section. I was not present when this occurred but I suspect Poppa was trying to doctor the buck’s wounds and did not realize the deer had regained his strength. Poppa spent several weeks in the hospital but was good as new the next fall when I hunted with him!

In my mind’s eye, I can easily envision that big 10-point buck I took close to a decade ago in the big, wide-open farm country near Streeter, North Dakota, not far from the Canadian border. I was hunting a pop up ground blind and watched the deer work his way off a distant hill, heading to the big pile of corn that was on the ground in front of my blind. It took the buck a good 45 minutes to slowly walk to the corn but I knew he was coming. I loosed my arrow during the last minute of shooting light. The shot was good but I quickly lost sight of the big buck as he bounded across a big harvested corn field. Just after dark, I followed an easy trail to the biggest body buck of my career. We weighed him later back at camp, a whopping 244 pounds field dressed!

As an outdoors writer, I’ve had the opportunity to hunt deer from the Canadian border to the wilds of Mexico and lots of places between. I can truly say I can’t remember a deer hunt that I did not enjoy. Granted, my goal of a big buck on the meat pole was not always achieved but if lasting memories can be counted as ‘trophies’, I have acquired one heck of a trophy room!

Things are getting pretty quiet here around at my little camp on the Brazos. The only sound I hear is the clicking of the keys on my laptop and the occasional eerie sound of a screech owl sounding off down the river; first one I’ve heard in years. The bird’s sharp call just trigger a serenade from a hunting pack of coyotes!

Occasionally a blue heron rises from the moonlit river and adds its harsh scream to the night sounds. I have some Chorizo sausage defrosting and plan to enjoy some breakfast tacos early in the morning. Life is truly good! I’ve hunted from far more spartan camps! It’s getting time to turn in. After all, morning comes quickly in the deer woods and I want to be fresh for that early morning encounter with ‘Ole Mossy. Here’s wishing you a happy deer season. And remember, just ‘being there’ in pursuit of the grandest game animal in the world is enough… hanging one on the game pole is icing on the cake!

Listen to Outdoors with Luke Clayton radio www.catfishradio.com each week. Join Luke and his guests Bill Dance and Larry Weishuhn as these veteran outdoorsmen talk about the outdoors. Email Luke via the web site with outdoors news from your area.

For more go to: Luke Clayton