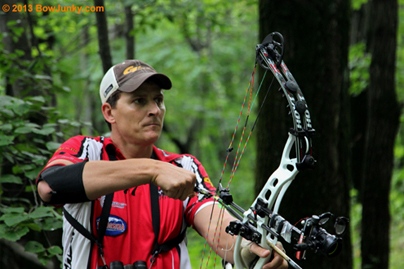 Veteran Pro shooter and Gold Tip Pro Staff Manager, Tim Gillingham, took home the IBO World Title at the recent IBO World Championship shooting a Flathead Release by Jim Fletcher Archery after a dramatic head-to-head battle with 2012 IBO World Champ and fellow Gold Tip shooter, Levi Morgan. The 2013 IBO Worlds, the last event of the 2013 season, were held at the picturesque Seven Springs Resort, in Seven Springs, PA August 7-10. Shooters fought against steep inclines, windy conditions and a Friday rain-out which postponed the second round to Saturday. After the delayed second round was completed on Saturday, Gillingham held firm to second place heading into Sunday’s final shoot-off with a score of 421. Morgan led the pack with a two-day total of 423. Gold Tip’s Chance Beaubouef landed a spot in the final shoot-off with a tie for third at 411.

The Pro Division of each IBO sanctioned 3-D event features a total of 20 unmarked targets shot over the course of two consecutive days, a change from previous years’ configuration of 30 targets on day one and 10 targets on day two. Contestants shoot each target once per day, scored as 5 (non-vital body), 8, 10, and 11-point rings per target, thus a perfect possible score of 440. Target distances are varied in range out to a maximum of approximately 50 yards. No range finding equipment is allowed at the IBO unmarked event, putting additional pressure on shooters to accurately judge distances.

In all, seven shooters with the top five scores headed into Sunday’s final shoot-off for the World Championship. After the early targets, Morgan maintained his lead, but then faltered, scoring a five, which turned the tide and launched Gillingham into the leader’s position; a position he would hold for the remainder of the shoot-off.  In the end, Gillingham finished up at 524 with 24 X’s, Morgan at 518 with 29 X’s, with Beaubouef rounding out the top three at 512 with 20 X’s. In the end, Gold Tip shooters had claimed all three positions on the Pro’s podium.

“Going into the final shoot-off, I just needed to keep my head down, shoot well and hope for the best,” said Gillingham. “ In the end it worked out; it was some of the most consistent shooting I’ve ever experienced.  After a few years of doing this, you realize how hard it truly is to win at this level.”

“I made some equipment changes to the Triple X Pro Shafts with 50 grain points to give myself a flat shooting arrow with a large diameter to catch lines and it worked out,” said Gillingham. “I am always experimenting with setups that are not status quo to see if I can understand the bow and arrow system better and find an edge that didn’t previously exist.”

Adding to Gold Tip’s success, fellow Pro Staff shooter, Joseph Goza, was crowned the 2013 IBO Shooter of the Year after accumulating the highest points total for the entire IBO season.

Not to be overshadowed, Gold Tip’s own Samantha Morgan shot her way back on to the final podium in the Women’s Pro Division, finishing a solid third for the IBO World Title.

“It’s been another incredible year for our Gold Tip Pro Staff, across all categories,” said Mitch McKay, Gold Tip’s Director of Sales. “These Pros literally depend on arrows for their success and for them to actually choose Gold Tip is most humbling and appreciated by all!”