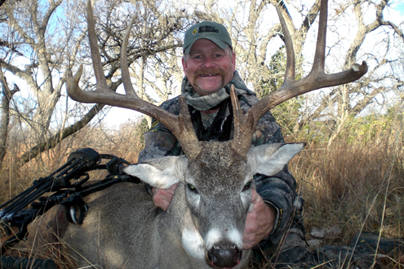 “My brain’s just like a big computer… OK. I’m kidding. I’m really not that bright. In fact, I even struggle with my smartphone.” I couldn’t help but laugh. Good natured host of ScentBlocker’s Most Wanted Larry Woodward was having some fun during a recent interview. His brain may not operate exactly like a computer, but in reality, he’s probably the most detail oriented whitetail hunter I’ve ever spoken to.

While most hunters appreciate the meat on the table, they hunt as sport. For Larry Woodward though, hunting is his livelihood. Larry has to consistently kill big bucks on camera for his career. Larry’s been guiding hunters, fishermen and working in outdoor video for nearly his whole adult life. In order to be as successful as he has in this cutthroat industry, he’s got to be doing something right. So, he and I spoke recently about exactly why and how he does what he does to consistently get on mature whitetail bucks.

“Scent control is an absolute must.” Larry explained what many of us have come to believe to be true- that bucks cannot know that we are hunting him. “I keep a case of  ScentBlocker Trinity Ti4 in my truck at all times and use that stuff on everything. I spray all of my gear until it shines.” Woodward even explained to me that he and his cameramen scrub their boots in scent free wash, let them air dry and then spray down with the potent scent eliminating spray. “The soles of those boots never touch anything other than ground. They’ve never even seen a truck floorboard”. Even with his most detailed scent control regimen of showering, garment care and liberal spraying, Larry always still plays the wind.

Scent control is especially important for people with limited hunting access. “Scent control is huge for the guys hunting small properties. There’s no way to guarantee that big old buck will stick around, and if a hunter is consistently stinking up the only patch of woods he has access to hunt, he’ll guarantee the buck WON’T be there.”

“So many hunts are over before they even get started.” Simple, but true. The deer do not realize (or care) whether a hunter is coming, going or hunting. They just perceive human presence as danger. Larry will not hunt a stand if he thinks at any point his wind will blow toward the deer or where he anticipates them to be. He will wait until everything is just perfect before hunting a stand. Larry has stands that often go unhunted because the conditions never were perfect.

Speaking of stands, I asked Larry about stand placement. “We usually like to get about 30 feet high, to make sure my cameraman and I do not get busted. We’ve got a lot of gear and need to get away with movement that will not be tolerated much lower.” I asked about the hunters who are not using a cameraman or who simply are not comfortable that high. “What matters most is that you are well hidden and that your wind will be right. A lot of times we’re in areas that do not have thick trees but will make for great TV, so we just hunt higher.” Larry prefers to hang several stands leaving him many options when it comes time to hunt. He’ll have some close to the bedding area, near a small Whitetail Institute food plot and everywhere in between.

“I depend on my Cuddeback cameras to tell me everything I need to know.” I have a few farms I hunt near home and simply cannot be at them all at once.” What a problem to have! But in reality, Larry makes a great point. We hunters, whether we are hunting a small farm or several large ones, cannot be in the woods all the time. Larry depends on his trail cameras to tell him what the deer and doing, when they are doing it and how he should best set up on one. Trail cameras have become an indispensable tool for many hunters. As always, hang them a bit high, aim them down at the target area and be sure to lock each camera to the tree to help keep people honest.

“Come the first week of November, every hunter south of the Mason/Dixon line is hunting in Pike County, Illinois. I’m serious… I see more out of state license plates there than local ones.” Even the fabled Pike County has to deal with hunting pressure. And from what Larry said, there’s a lot of it. “Some of the properties I’m on are lined with a fresh batch of outfitted hunters, who paid good money to shoot a buck, week in and week out throughout the season.

“Right now… acorns trump everything”. Larry was explaining that in the area he hunts right now, many cornfields have not been picked and the acorn crop is abundant. Instead of waiting for deer to come to him, Larry continues to hunt stands that he knows will have deer nearby. There’s no sense wasting time in an unproductive location, find the preferred food and the deer will be close. He looks for large concentrations of droppings to help pinpoint where the deer are feeding heavily.

As far as sign goes, Larry pays attention to scrapes, rubs, and tracks. He also factors in what phase of the rut the deer are in to help devise his plan. In the early rut stages, Woodward enjoys using a doe decoy to help lure in that wise old buck who may not just bite on rattling and grunts alone.

“Hunting is supposed to be fun. So many people watch too much TV and read all the magazines and think they shouldn’t shoot anything less than 4 ½ years old. In reality, most properties hunters across the country have access to will not hold a mature buck.” Larry raised a very good point. In my home state of Michigan, there are certain areas where a 2 ½ year old buck is considered mature. Larry described his stomping grounds of Missouri as very similar. Believe it or not, even TV show host Larry Woodward has to work for hunting permission, and has to share access with others.

I really enjoyed talking with Larry. I learned a lot and he inspired me to get out and find a new buck or two to hunt. He reminded me that with the help of his ScentBlocker gear, he’s been able to get away with so much over the years. Still, when Larry does make a mistake somehow, he analyzes every aspect of it and tries to make it a positive learning experience. He may not be a supercomputer but the lessons learned from his old school logic and woodsmanship skills are timeless.

To stay safe in your treestand, to stay scent free and to be comfortable wherever you hunt make sure your hunts always start with Robinson Outdoors