Lessons of the Field – Feelings of Success 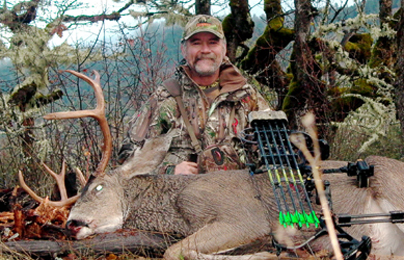 In recent years I’ve come to the conclusion that during every hunting season there is always a lesson to be learned and this year proved to be no different. This year’s lesson started when Lisa and I arrived at our sacred grounds prior to opening day of elk season and decided to scout the area after erecting base camp. Because our campsite is traditionally built on the edge of a private ranch friends of ours own, we keep it up for the entire month of September.

As we were skirting around the base of the mountain we came across an uninhabited camp that consisted of four tiny dome tents and a cook stove. This was alarming, considering it was a first for this area. It certainly didn’t look like they were going to be there long considering there wasn’t a whole lot of supplies. Also, the camp was about 3 miles from our camp on the opposite side of the ridge. I figured there was plenty of room between us regardless of what they were up to. Once again though, I was very wrong. We soon learned their camp was going to stay put for the entire season. We also learned the camp was a bowhunting camp but these boys were a very special kind of bowhunter we were going to have to reckon with.

First, there wasn’t an ounce of fat on any one of these guys and they were running on finely tuned motors with a full tank of gas. They were relentless and never left a leaf unturned. They could eat up real estate like it was a walk in the park, regardless of how steep, thick, or rugged. They carried nothing with them other than mouth calls and bows…no backpacks, water, optics or food, only shoes, tee-shirts, skill, and a deep-seeded hunger to bring the bacon home. Ironically, the bare- bones-boys were so proficient at working the herds they never did push the elk out of our range for the entire month. They consistently kept the wind right and somehow kept themselves in the perfect stealth mode. EVERYWHERE we gridded on that mountain in pursuit of the herd bull we called ‘ole Blackhorn’ we cut boot and sneaker prints right along with any and all of the fresh elk sign we were finding. Bear in mind that we are talking thousands of feet in elevation change and miles as the crow flies.

Ironically, in spite of the range riders, we STILL had the most ‘up close and personal’ action we have ever encountered during any elk season. I called in a number of bulls to point-blank range, including Blacky 3 times. As Lisa explained, she felt that Blackhorn simply ‘liked me’. I failed to see the humor in her comment however. I think my close relationship with him had more to do with the HECS STEALTHSCREEN suits we were wearing than some male bonding experience. This amazing garment keeps the electromagnetic impulses we all give off contained so animals who can detect these impulses can’t pick them up. HECS kept the elk from becoming aware that there were humans in their area. HECS works is all I can say and continued to help bring them right into our kissers, relaxed and with their guards down.

The consistency of the closeness of our encounters was just not a coincident but I have to say it was unnerving. At one point while the boss bull was attempting to herd his cows away from an interloper, we were astonished to see that a small portion of the herd had broken off . As Lisa and I were trying to keep up with the bull and his harem they just stood there and watched Lisa and I stalk right by them at 50 yards. We were so intent on the others we just flat missed this part. They never moved which never happens but we again marked it up to us both wearing our HECS.

In another incident we had ‘Blackhorn’ bugle directly into our faces from 12 yards away. He continued tearing saplings to pieces, tossing debris well above the wall of brush that separated us as he bellowed across the canyon so close we could almost touch him. The concussion was enough to send us back on our heels. Because of the mass of jungle we were confined to we never got the opportunity to put an arrow into him.

That wasn’t the only stalk that got messed up. It also happened that our motorized hunters also boogered up a few of my set-ups by stalking into my calls right along with the bulls. Even though it seemed to be honest mistakes, I knew it was time to have a pow wow with them.

I visited their camp anxious to set some ground rules in hope of a settlement. I quickly learned that not only were they rabid hunters but they were also ethical and sincere. They told me that my calls were so convincing they fooled them into stalking in. Well, I can understand that. I do put out a pretty authentic elk call. We did lay down some ground rules that worked for all and that was a good result. They proved to be a great bunch of guys and what could have been a dust up turned out to be a new friendship. I also learned that they only had spike tags which was the only reason the herd bull was still alive. I also learned they had a number of recent photos of branch bulls, including Blacky and some awesome video as well. Once Troy, Nathan and James realized I was the only one with a big-bull tag we agreed to develop a line of communication and the game took a whole new turn.

As the season was coming to a close, they texted me a couple of time and helped lead us to the herd bull’s location. It almost paid off but sadly enough Mother Nature had different ideas for Lisa and me this year. It certainly wasn’t for lack of trying. I also learned that assuming people you come across in the field may or may not turn out to be accurate. My first thoughts on the guys in the other camp turned out to be false and a friendship resulted.

We carry the best equipment available. Obviously I want to have every piece of equipment offered to the hunting consumer from bow to arrow to backpacks, cutlery, broadheads, camo clothing, tents, optics and everything in between to be the best because I truly believe if you use the best, you’ll always get the best performance. Having said that, the one lesson I have learned over the years I’ve been a bowhunter that is even more important than the equipment that you use is that its not necessarily what you carry on you that makes you a successful hunter but what you carry in you. You can have the best, most expensive products known to man but if you don’t have the heart, inspiration, dedication, desire, knowledge, patience  and an uncompromising love of the hunt, you will never achieve the success that the true icons of our sport have attained.

When we rolled into Blacktail deer season, we certainly had a much different perspective on the hunt. We waded into it with a commitment that failure was not an option and we would do what was necessary each would get shot opportunities. I was hungry, to say the least. I kept having visions only frozen pizzas in our freezer. Lisa was on the same page I was.

As I sat in my treestand opening morning watching the sun rise I reminded myself of what it really takes to be successful in the field and rededicated myself to that end. I also thought of Troy, Nathan and James and their determination and an empty freezer helped carry me through some of the nastiest weather conditions I’ve ever hunted in during the remainder of the season. Lisa and I camped and on that mountain for 3 weeks battling up to 60 mile an hour wind gusts, rains, snow, mud and freezing temperatures as we stubbornly pursued the elusive Blacktail. I spent well over a hundred hours in a number of treestands while Lisa persistently hunted out of ground blinds brushed in with “Blind-Webs” from Spidy Gear. Because of the weather conditions and the type of terrain we were in we decided that stalking and rattling was not the best option, especially since the winds kept swirling unpredictably.

3 days later Lisa capitalized on her shot opportunity by center-punching a respectable buck as well. She explained too how looking at the Dead-On pins right before releasing gave her that added confidence, knowing she was on cue. If you practice on 3-D targets the Dead On Rangefinder sight can help zero in on whatever species of animal you are hunting by simply adjusting the pins to each body-size of game you are hunting.

Lisa also noted that deer never paid much attention to her blinds but did go after the scent wicks laced with “VS1” and the mock scrapes. The blinds were also scented with “Evercalm” and completely brushed in from top to bottom with surrounding foliage, melting them into the areas she was hunting.

Troy, Nathan, James, Lisa, and myself all took bucks that year. However, because of what I have consistently witnessed during my hunting endeavors in recent years, I will never go to the woods to hunt deer without my tricks of the trade. I am a firm believer in mock-scrapes, drippers, wicks and scent-drags. Also, stand placement must come first and foremost. If you chose to blind hunt, which is a very good choice in foul weather, I feel it is imperative that the blind is brushed in extensively, unscented and cover-scented for maximum protection against being winded. I highly recommend wearing HECS suits regardless of whether you blind, treestand or stalk hunt. I’ve seen the way game reacts when not wearing HECS and when. Animals simply are calmer and allow you to get closer to them when we are wearing HECS. HECS just works.

I will never stop thinking, feeling, learning and training about the hunt and my desire to be better each season. As I  throw wood onto the fire this leads me to my final thought… Are you hungry?

Special thanks to Troy, Nathan, and James

Conquest Scents‘ VS1, Evercalm, Rutting Buck, and Elk Herd in a Stick

New for 2014 - Creed XS and Monster Chill R by Mathews