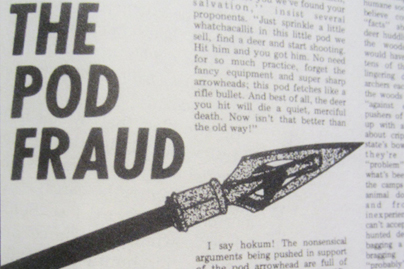 After a lengthy investigation by Colorado  Parks and Wildlife and federal wildlife officials, four men from South Carolina were arrested for suspicion of violating a variety of wildlife laws, including using a powerful toxin attached to their arrows, hunting after legal hours , using bow-mounted electronic or battery-powered devices and hunting bears, deer and elk over bait.

“In Colorado, wildlife regulations exist for three main reasons “ said NW Regional Manager Ron Velarde. “There are biological, safety and fair chase considerations. The use of poisons or toxicants to hunt is a very unethical method of hunting, violating the tenets of fair chase and can also be very dangerous to the user”

Velarde said the use of poisons and toxicants allow an individual to take an irresponsible shot, relying on the effects of the drugs to kill the animal rather than skill, patience,  discipline and a well-placed shot.

The four accepted a plea bargain and agreed to pay more than $10,000 each in fines for the use of the toxicant and for illegal possession of big game. They forfeited all evidence seized in the case, including four compound bows, arrows and quivers, an ATV, night vision goggles, flashlights mounted on their bows, coolers containing game meat, animal hides, the poison and the arrow-mounted pods used to inject the drug into the elk, deer and bears they killed.

The men received a 4-year deferred sentence and were banned from hunting Colorado and other Wildlife Violator Compact states for the same period of time.