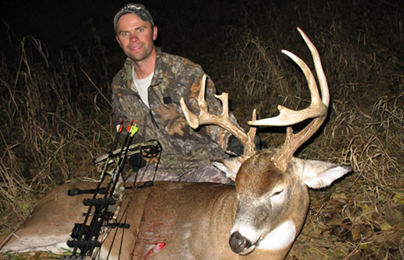 I was perched 20 feet up a big hackberry tree overlooking a creek crossing in northeast KS. I just completed a rattling sequence and was patiently waiting as the sun dropped below the horizon. My eyes caught a faint movement through the trees.

I picked up my binoculars and glassed the buck. He looked heavy with some tall tines, although I could tell he had a weak side, with some injury or broken points. His actions and appearance indicated he was a barrel-chested mature buck and would be a worthy prize.

I was pretty sure he had heard the rattling but gave a couple grunts and doe bleats to try and coax him my way. I believe he already knew exactly where the “fake fight” was but he made a nonchalant circle around the sound in an attempt to get down wind. Stopping to rub and scrape along the way, he crossed the creek and was heading out of sight. I thought it was over so I gave a couple more grunts trying to peak his interest. He turned my way.

He slowed his pace and straightened up. You could see it in his eyes; he was thinking those deer I heard should be right here… He closed the gap to under 25 yards and was in a shooting lane walking slowly in my direction. The dying evening winds brought just enough breezes to him. He was about to realize the whole thing was a fake.

Too late, he’d been fooled. The arrow was good. I watched him tip over after trotting 50 yards. He does not have the highest scoring rack, but appears to be mature and is one of the bigger bodied deer I’ve ever shot. It’s always fun when you fool one of those old bucks!