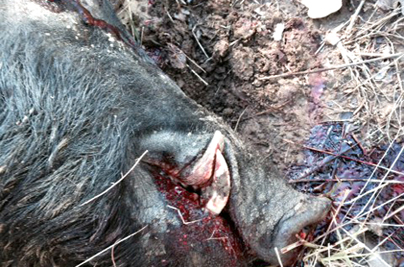 The monster boar stopped broadside at 24 yards. He was nervous and getting ready to bolt when I picked my spot and released. Let me back up a second. I had many pictures of this big boar on my Spypoint game camera. I knew he was a true trophy if I ever got a chance at him. His tusks were massive and he would weigh close to the 350 pound mark. I have taken many hogs here in Texas, but this dude was something special. He was an old boar that I estimated close to six years of age.

The chance did come on a bright sunny day with a mild breeze left to right. As soon as this one came into sight I knew it was right one. Secure in my HECS suit, the boar never knew I was there. My arrow flew true and I watched it blow right through his armored plated side. This massive, very dense thick layer of fat lays right around the shoulder and in mature boars is hard to blow though if you don’t hit it right, with the right broadhead. I felt the shot was good.

I gave him about an hour and when I started to track I knew it would not be a long tracking job, the blood trail was massive. Less than 80 yards I found him. Walking up to this hulk of an animal I was totally in awe of just how big he truly was. He was an old aggressive boar showing countless scars from the many battles he had over his life.

The equipment I use comes after years of trial and error. Like most bowhunters I know my skill and abilities have to be backed up by the best equipment I can find. While everyone has their own list of preferred equipment, I have honed mine down to and have the ultimate confidence in the deadly combination of the Carbon Express Maxima Hunter and the expandable 100 grain Grim Reaper broadhead! It is saying something when an arrow-broadhead combination can do such devastation and bring such a tough adversary as this old boar, down as quickly as it did. To say I went home a happy hunter would be an understatement.

Special thanks to these great companies

Products For the Disabled Bowhunter #2