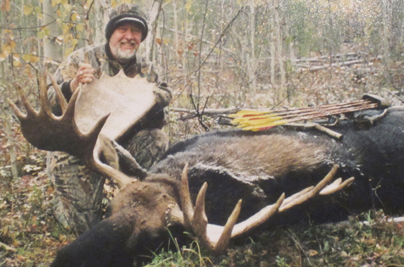 THE INTERNET NEWS HEADLINE was obviously designed to grab a reader’s attention … and it certainly jumped off the computer screen at me. Seems four South Carolina bowhunters had just been arrested in western Colorado this past September for using “poison arrows” to illegally take deer, elk, and bear. And for me, seeing those two unexpected words – poison arrows — released a flood of long-buried memories.

You see, way back in the 1960s when I first began making annual late summer trips to Colorado to bowhunt mule deer at outfitter Bob Morrison’s camp in the Book Cliffs above Rifle, I once met a nonresident Mississippi bowhunter who showed me and my buddies the drug-tipped arrows he religiously used in his home state and always carried on all of his hunting travels. “Hit ‘em anywhere,” he crowed, “and they’re good as dead.”

All it took, he explained, was enough penetration to release the drug succinylcholine chloride (SCC) into the animal’s bloodstream. The powdered “poison” was contained in rubber sleeve – or “pod” – which fit on the shaft just above the broadhead. This synthesized chemical, most commonly used by vets in the medical treatment of animal patients, induces death by immobilizing respiratory muscles and causing fatal suffocation. SCC does not affect the meat, which is safe to eat.

Never mind the fact the Food and Drug Administration has declared SCC a prescription-only drug, illegal for use by bowhunters. Never mind the matter of “Fair Chase” and the Pope and Young Club’s rule banning the use “of any tranquilizers or poisons.” Never mind the fact that Mississippi and a few areas of other southern states turn a blind eye to the legality of residents using drug-tipped arrows. In such places the deadly drug was and is available wherever bowhunters gathered. Then and now, some southern-based bow and arrow hunters are simply unable to resist the allure of “poison” to get their game and then smugly spread the gospel of drug-tipped hunting shafts.

As I recall, that Mississippi bowhunter had little luck convincing any of us that SCC was something we should try. Fact is, Bob Morrison told him to use regular hunting arrows and razor sharp broadheads if he wanted to stay in the hunting camp. But I’ve never forgotten that incident or the handful of other times I’ve bumped into Dixieland hunters who carried drug-tipped arrows in their quivers despite breaking the law and thumbing their noses at safe, ethical, and effective bowhunting practices.

FITTINGLY, THAT QUARTET OF SOUTH CAROLINA BOWMEN paid a steep price for their illegal activities in Colorado. A report in the Grand Junction Daily Sentinel detailed their penalty as thousands of dollars in fines and court costs, as well as confiscation of four Mathews compound bows, all hunting arrows, broadheads, pods, and drugs, a night vision scope, trail cameras, coolers, meat, and a Kawasaki ATV. Judge Arthur Smith then added a stinging rebuke, stating: “You should be ashamed of yourselves. This isn’t hunting. This is going out and killing things.”

One of the four South Carolina scofflaws, Jim Cole, was quoted in the newspaper as saying, “Back in South Carolina, everybody hunts with them (poison arrows),” calling it an “insurance policy.” Another of the quartet, George Plummer, said he’d bowhunted the same Colorado area since the 1980s, leaving readers to wonder how long he’d been illegally hunting with drug-tipped shafts. The other two men were identified as Mike Courtney and Joe Neuling.

Of course, not “everyone” in South Carolina or Mississippi or other states uses “poison arrows” and knowingly breaks the law. Not everyone believes an “insurance policy” is necessary or that hitting an animal anywhere is a substitute for proper shot placement in the heart-lung kill zone. Unfortunately, some misguided hunters will do anything for a buck, literally.

FOR WHAT IT’S WORTH, the topic of “poison arrows” is nothing new. Not much later after my encounter with the Mississippi scofflaw, Sports Afield magazine published a feature in 1973 called “The Case for the Drug-Tipped Arrow,” which blamed a lack of facts about SCC for banning drugs in bowhunting. And in 1973, as Editor of Bowhunter, I bought and published “The Pod Fraud,” by Denny Ballard. That article debunked the claims by the pro-pod crowd and provided documentation that SCC was both dangerous and horrendously cruel, leaving animals paralyzed and unable to move but still conscious while slowly suffocating.

Fact is, Bowhunter took the lead in the battle to keep bowhunting drug-free, despite the fact that the pro-SCC crowd delighted in pointing out that none other than the great Fred Bear had advocated the use of “poison pods.” Actually, Papa Bear did hold two 1971 patents for drug-dispensing pods, which he explained as his way to control the usage and proper application of the drug if ever legalized. Note that Bear Archery never produced or marketed pods for bowhunting

Additionally, Bowhunter published Hunting Editor Fred Asbell’s “The Case Against Drug-Tipped Arrows” and Denny Ballard’s follow-up feature, “The Pod Fraud: Revisited,” both published in 1983. But by then national interest in SCC was already on the wane, following the 1981 death of a Mississippi bowhunter, Stewart Patrick McAlpin, who was shot in the thigh by an arrow tipped with a Bear Razorhead and a pod containing 250 milligrams of SCC.

Those recent news reports spotlighting “poison pods” immediately reminded me of battles fought and won decades ago … and the sad fact there are still cheaters willing to do anything to kill animals, no matter how tainted or hollow their questionable accomplishments.