by Robert Hoague
in Bowhunting Blog, Deer
0 0
A A
6 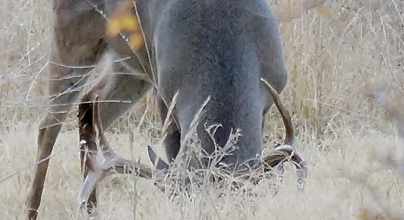 BACK TO PART #1 Of The Bowhunt For Number 9

During August September of 2012 I saw Number 9 in velvet on several occasions in my small Food Plot area. The food plot did poorly that year but still it had enough growth to attract local deer.

In my opinion, in terms of bucks, my summer food plot is not about the plant growth and the bucks quest for more protein. A few years ago I came to the conclusion that my summer food plots were mainly a place for bucks to come and “see and be seen.”

The bucks want to know what other bucks are around and, just as importantly, they want those bucks to know they are afield also. Anyway, that’s my take on it after 15 years of planting a food plot in this particular place and watching it carefully for years.

With that said, lets get back to the 2012 bowhunt for number 9. Although I continued to see him after he shed his velvet in September, once the bow season got going I didn’t see him any more.

So on October 30, 2013 when I had a trail camera picture of him approaching a young doe, I breathed a sigh of relief. Here is that picture. It told me Number 9 was still around. 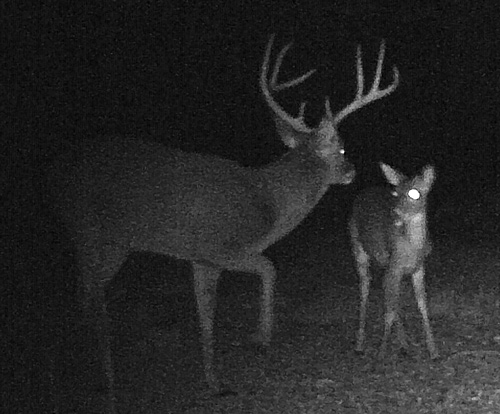 But he soon disappeared from my scouting cameras again, which frequently happens in November as does come into rut and the bucks expand their area looking for estrus does.

On November 19 he walked in front of my Spypoint trail camera at a scrape. Number 9 was back. Things were going to get exciting, fast. 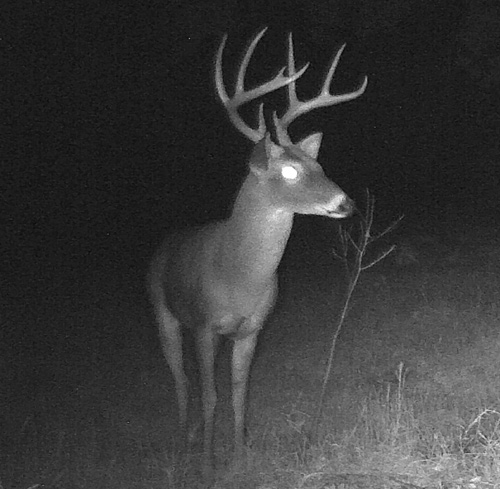 One of my hunting areas has a natural water seep where water collects year round. I call it the Secret H2O Seep. This year I had put a pop up ground blind there and hunted it regularly. On the morning of November 24 I got lucky.

I saw deer legs walking in the trees on the hill across from the H2O Seep. Those legs turned into Number 9 and he came out of the trees and walked down to the water seep. My bow was already in my left hand.

Quietly, I picked up my camera with my right hand, I wanted to get a few pictures while he was still out of bow range. I rested my camera on my bow’s top wheel and zoomed in on him. Below, he came to a stop 35 yards from me. 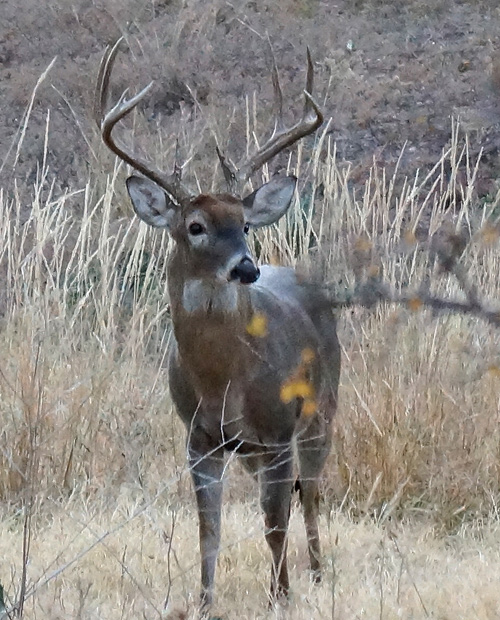 Number 9 jammed his head down into the seep and drank water. 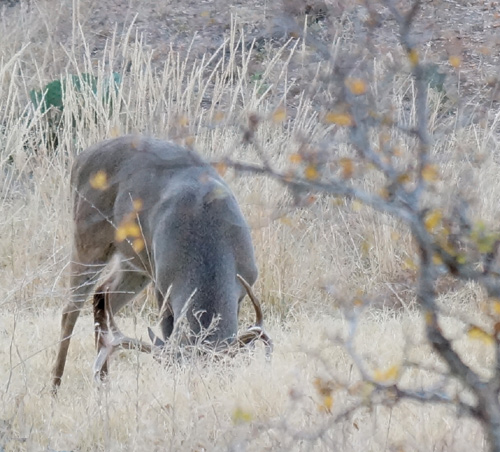 I sat my camera down and clipped my Fletch Hook around the bow’s string loop. He continued to drink. He needed to be another 10 yards closer to give me a shooting situation.

When he was finished drinking he turned and it was obvious he was going back the way he came. I got the camera and took a picture. 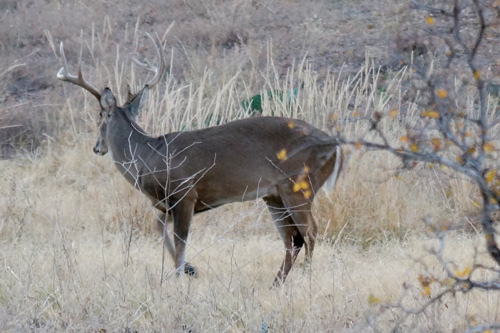 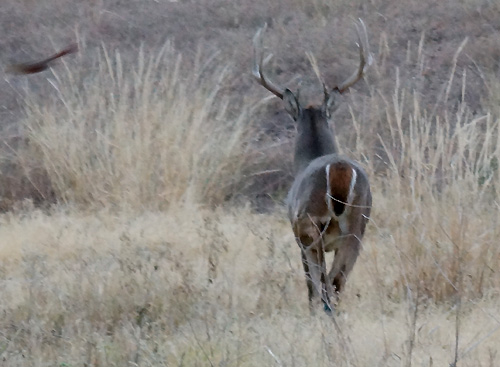 When I deer hunt I always have 2 grunt tubes with me. A Haydells grunter and an A-Way deer call. I switched the camera for the Haydells and aimed it to my right and made two very short grunts. He stopped.

When he turned and started back toward me I took one more picture and Fletch Hooked up. 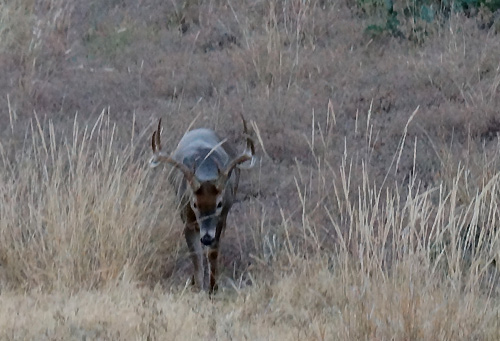 The H2O Seep has one potential draw back. It is down hill from the Coletche road that runs by my house and dead ends on the neighboring property, where no one lives. Since this is the end of the road situation, and a rough road to boot, traffic on the road is very limited.

Both Number 9 and I heard the sound at the same time. Number 9 froze. We both heard the distant clank of a vehicle crossing my cattle guard on the road. It was the once a week mail delivery from our rural mail man.

Now, I’m down hill and totally hidden from that road. Generally if someone drives by on the road the deer in this hidden valley aren’t worried about it.

But Number 9 is not those other deer. He’s a mature buck, at least 6 year’s old, and he doesn’t take any chances. Number 9 disappeared into the trees in a flash.

After the mail man returned and left I waited for 3 more hours and saw several deer, bucks and does, before going to the house.

So, this morning we both got lucky. I saw Number 9 and had him come almost close enough for a shot. And the noise of the mail delivery jeep turned him away. Nothing is as lucky as a big, mature whitetail buck.

However, I was there in his mix, and he doesn’t know I’m onto him. And I just might see him again … in bow range.