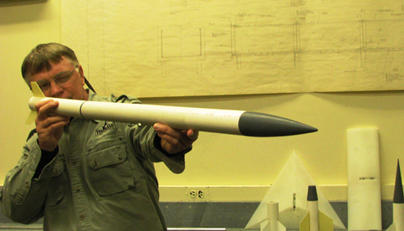 The elk stopped at 42 yards behind a blowdown pine. The vitals were visible through a hole the size of a ring fruitcake. The arrow threaded the needle and I have about 200-pounds of elk in freezer wrap. My broadhead flew true. I was shooting a well-engineered head. I later had a chance to test this head in an aerospace lab. Here is the story.

A broadhead must have the same flight characteristics as a rocket. How can a Broadhead designer know how these dynamic forces effect broadhead flight? The best way is to test these factors in an aerospace lab water channel. This is how the military and NASA tests rockets. 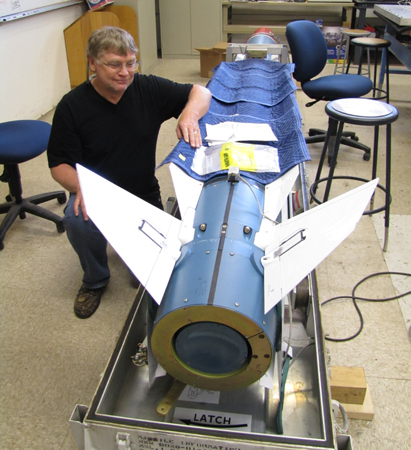 One broadhead has undergone this unique high level testing. That broadhead is the Swhacker. We worked at one of the nation’s top University aerospace labs last year and plowed new ground in broadhead performance testing. We already knew that Swhackers were bringing down an unprecedented number of bucks, and doing it with short blood trails. We thought you may want to know the reason why this head was so reliable. Off to the lab.

Step 1 involved making a large scaled prototype that was exact in every way to the one we shoot. The dynamic forces that air exerts on a broadhead as it flies must be managed to achieve stability. Because air is so fluid and thin, labs use a dynamic water channel for data gathering. We can get accurate data by multiplying by an air to water conversion factor. Now the results are observable to the human eye. 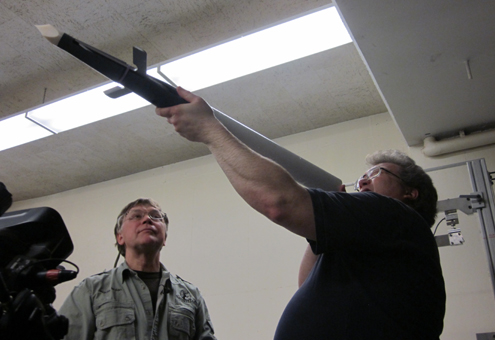 This is easy to understand once you realize that in a wind tunnel the air may be traveling up to Mach 1 speed. It takes only a millisecond for the air to pass over a broadhead or rocket. Like the wind tunnel, the dynamic water channel gathers data via a series of sensors attached to the pod holding the broadhead.

To get a baseline reading or control, we also made a field point prototype for testing. Once positioned in the tank with the sensors attached to the pod holding the field point we darkened the room, began circulating the water and added UV dye at the point of the test subject. The water current then distributes the dye for visual observation and the computer connected to the sensors begin to feed us data. As expected the field point had perfect flight characteristics.

Next, we tested a delta wing design like the B-1 Stealth bombers employ. It was interesting to see the vortices of dye that the delta wing created when in a climbing attitude. These disturbance swirls are interpreted by rocket scientists and related to flight characteristics.

Then we attached the Swhacker prototype to the prod and submerged it in the tank. Lights went out and the computer screen lit up with at-rest data. We were checking for pitch (up and down forces), roll (left and right lean) and yaw (tail swing left and right. Yaw is also known as angle of attack. The presence of yaw  during broadhead flight will lead to major accuracy issues.

We cranked up the water speed and introduced UV-dye at the tip of the broadhead. Like a knife through butter, the Swhacker slipped through the tinted water without a disturbance. It appeared the reverse chisel blade edges canceled each other out and the water channel’s dye flowed by smoothly. 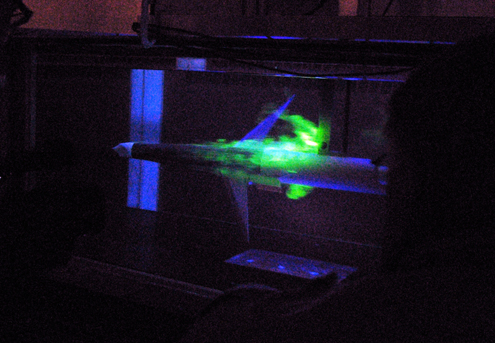 The computer took readings at a rate of five/second and data flowed onto the graph. We had a rocket that would fly. Indeed, after days of testing the Swhacker design yielded consistently good flight data.

The first aerospace testing of a broadhead in a dynamic water channel had offered a convincing story.  No pitch, yaw or roll…just rock n’ roll. Go to Swhacker.com to see our crazy testing.