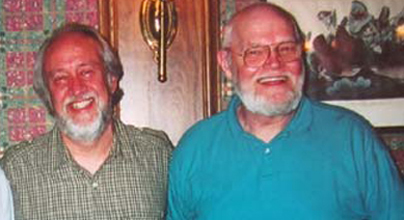 ONE OBVIOUS DOWNSIDE of a long life is outliving your friends. For me, 2013 was an especially sad year because l was forced to say goodbye to four unforgettable men whose decades-long friendships left a lasting, indelible imprint on me as a magazine editor, writer, bowhunter and man.
Three of them – Tom Jennings, Gail Martin, and Don Clark – were all well known members of the national archery community. Don, of course, was a co-founder of Bowhunter Magazine and my publishing company business partner for 30-plus years. He and wife Pat were the public face of our magazine at countless bowhunting conventions, sports shows and industry events from the 1970s into the 1990s. Don died March 19. He was 79.

Known as “Mr. Compound Bow,” Tom manufactured and marketed quality compounds bearing the Jennings name and licensed under H. W. Allen’s 1967 patent. He made the first wheeled bow I ever owned and hunted with in 1972. We soon became friends, and I attended Tom’s induction into the Archery Hall of Fame in 1999. We always took time to chat whenever our paths crossed. Tom passed away at age 88 last February. Straight Talk: Tom Jennings

Gail Martin, who with wife Eva founded the world famous Martin Archery Company in 1951, was a regular Bowhunter advertiser from its debut issue in 1971. I got to know Gail through that business relationship and the Pope and Young Club, where we were Senior Members. I last saw Gail and Eva in September of 2012 when the patriarch of the Martin clan was belatedly inducted into the Archery Hall of Fame in Springfield, Missouri. Gail died this past May. He was 89.

LESSER KNOWN OUTSIDE OF Montana and the Pope and Young Club membership, Dr. Chuck Williams was perhaps the most positive, upbeat, giving, and eternally optimistic person I’ve ever known. He deeply loved God, his family, friends, all things bowhunting and fishing. He especially treasured his beloved Big Sky Country.

In the Introduction to my 2007 book, Unforgettable Bowhunters, I identified Chuck as my best friend, my dentist, a fellow bowhunter, a P&Y Club Senior Member and godfather to grandson, Marc Charles James. Delivering the eulogy during his memorial service in Kalispell this past November 30, I told the large crowd gathered in Kalispell’s St. Matthews Catholic Church why I considered my friend so special and why those of us who knew him were genuinely blessed. Please allow me to briefly explain so readers will better understand why so many people feel as I do.

Although our paths had first crossed in the early 1980s at Pope and Young conventions and Montana Bowhunters Association banquets, I didn’t really get to know Chuck well until Janet and I moved to Montana’s Flathead Valley in 1989. There we hunted and fished together, sharing holidays and family gatherings. Chuck “adopted” our son Dave, who’d graduated from the University of Montana in Missoula and married a pretty girl from Whitefish, settling down and raising a family of his own in the Flathead Valley.

Janet and I watched Chuck and Karen’s youngsters – Anne, Chris, and Jenny – grow up, routinely attending their school sporting competitions, hunting and fishing together, and sharing holiday meals. In 1990, Chuck joined me and Fred Asbell on an “Old Man’s Bowhunt” for caribou in far northern Quebec, since Fred and I were turning 50. The three of us tagged our limits of two big-antlered bulls apiece that week, and I wrote a Bowhunter article about that memorable adventure. He was with me on another successful caribou hunt in the Northwest Territories and we chased Arizona Coues’ deer, where one morning Chuck “bumped into” a large black bear and later claimed to have been charged by a “200-pound javelina” with tusks “at least a foot long.” Stories such as these, always told with hyperbole and self-deprecating humor, were Chuck’s trademark. They always delighted campfire listeners.

Chuck and I shared countless other deer and elk hunts, as well as duck and goose shoots on my Montana ranch along the Flathead River. It was there I introduced Chuck to calling and decoying wild turkeys, luring lusty gobblers within bow range for my friend. And when I drew coveted mountain goat and moose tags, Chuck insisted on tagging along on scouting trips and sometimes the hunts themselves. He was with me in Utah when I shot my Henry Mountain bison. Our list of shared adventures goes on and on.

But in November of 1997, while I was on a solo deer hunt in Iowa, Janet called with the devastating news that my friend had suffered an aortic dissection while in his dental office. He’d been airlifted to Missoula. He wasn’t expected to live. Even rare survivors, we were told, usually died within three to five years.

Amazingly, Chuck beat the odds, enduring multiple surgeries and painful rehabilitation. His stated goal was to bowhunt again and in time he met that personal challenge. In fact, for 16 long and productive years, Chuck celebrated his extended life daily. Though forced to retire, he was more active than ever, focusing his attention on his wife and children as well as his many friends and youngsters living in the Flathead Valley.

He routinely ran a “Preserve the Tradition” ad in the Kalispell Daily Inter Lake, spotlighting successful young hunters posing with game birds and animals. Accompanying each weekly photo was the message, “It’s better to take your child hunting than go hunting for your child.” He bought and donated firearms to kids, helped sponsor fishing derbies and was known as “Uncle Chuck” to two generations of Montana youngsters.

Then in a cruel twist of fate, his eldest daughter Anne – a nurse at Children’s Hospital in Seattle – developed cancer and died at age 35 in 2012. Grief-stricken, Chuck never recovered from that loss and died a year and two weeks after becoming ill while hunting Oregon elk with his brother-in-law. He was 66.

Chuck, Janet, and I were together a final time in Dallas at last spring’s Pope and Young Convention. I now look forward to seeing him again someday – along with Anne, Don, Tom, Gail, and other special friends. Each brightened my life and will live forever in my memory.

IN SIGHTS NUTRITION: You Just Never Know What it will Bring In

Miller’s Tips: Keeping the Edge in the Field

Miller's Tips: Keeping the Edge in the Field

Be a BHN Writer