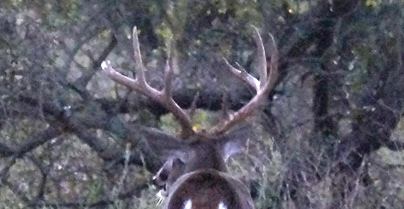 The new year came and I watched for Number 9 on my Spypoint trail cameras. The days clicked by and, frankly I was getting worried that he had got himself hung on some neighboring gun hunters game pole. But on the morning of February 24 my routine check of the Spypoints eased my mind. There he was at 12:57 am.

Indeed, the gods of bowhunting smiled on me that day. Number 9 was alive … and in the area once again.

And the chances of him staying around through the Spring and Summer were nearly 100%.

Bucks in our area shed their antlers during the month of March. And, the same as everywhere else, their new antlers begin growing in a few days. I began seeing Number 9 in July and by August he had his usual 8 points plus a crab claw point on the left antler, with a new addition of a small point on the right antler.

He shed his velvet in early September. By this time I was spending lots of early morning in one of my photo blinds and took lots of deer pictures. Just after he lost his velvet, I saw Number 9 close up and nailed him with my Sony.

Number 9 browsed around, finding little green tid bits of the small native plants that grow in my little valley. 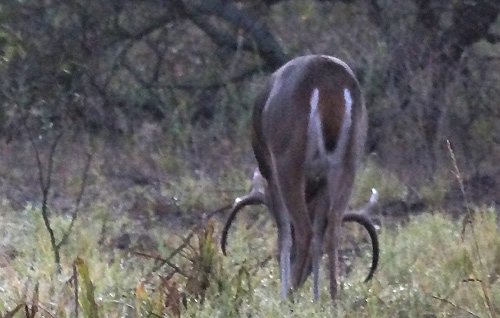 I got one last picture as he looked around the area ahead of him before walking north and disappearing into the woods in the picture. 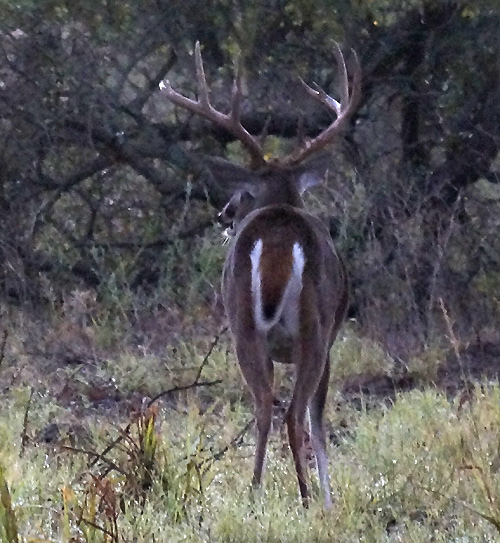 The archery deer season began on September 28. I hunted in one of my ground blinds and watched for Number 9. But he did not show opening weekend. Nor the week after.

But he was gonna.