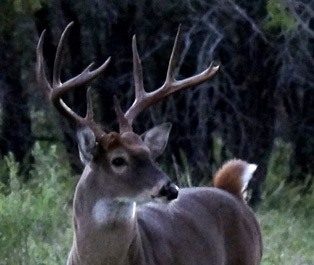 On September 27 the Number 9 buck was on one of my Spypoint trail cameras at 7:22am. In terms of trail camera time that is the short window of time between the very first bit of daylight on the horizon up to a few minutes later when there is enough light for the camera to switch from black and white to color photographs. (See below.)

Actually, I was in my photo blind that morning before daylight and saw him, but there was not enough daylight for my Sony digital camera to take a good picture yet. So I was pleased when I picked up the SC card from the Spypoint and saw a few  pictures of Number 9.

The property I bowhunt is land that myself and a few friends lease, a nice 1,000 acre chunk of deer country. While 1,000 acres is not a large area, it’s not small either. The terrain is a mixture of hardwoods and cedars that runs along the north border of the property. A long, narrow farm field runs adjacent to the river. The property is “L” shaped, with the river being the sole of the boot, and there are 8 different properties that border our lease land. All of them hunt with rifles after the archery season is over, which is referred to as the General Season. And it is also legal to hunt with archery equipment too. That gives me and my buddies 3 months of deer bowhunting. Nice.

The day before Opening Day of archery season, my friend John Askew came down to hunt, he and I have been on this lease for 24 years. Bryant and Justin, two other lease members were also hunting.

When my alarm went off in the morning the weather had taken a turn — it was pouring rain. I checked weather.com on my iPhone and it predicted that it would rain until 1:00pm. I listened to the downpour for a while anyway but finally went back to sleep.

When the rain stopped in the afternoon we all went hunting. I saw several deer, both bucks and does, during opening weekend and John got two does on the opening afternoon bowhunt.

The next few days Number 9 did not come to my area during the day. But he was on my Spypoints almost every night, so I knew he was still around.

When I practiced shooting after my morning hunt on the 5th my arrows were not grouping and my bow didn’t feel right when I drew it. So I called my friend Jim Mitchell and drove over to his place, Red Oak Ranch, and he and Gene Curry worked on my bow.  I had gotten it way out of whack and Gene got me back up and shooting good again. 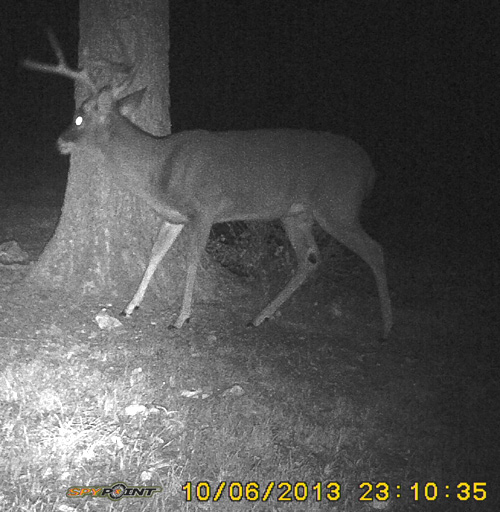 The morning after the above picture (taken at 11:10pm) I was watching two does in my food plot. Then a 10-point buck I call Stuck Up, because he has a bunch of stickers on his antlers, came into the immediate area.

Suddenly, a buck walked around one of the mature oak trees near my food plot. It was Number 9.  I took his picture as he approached one of the does. 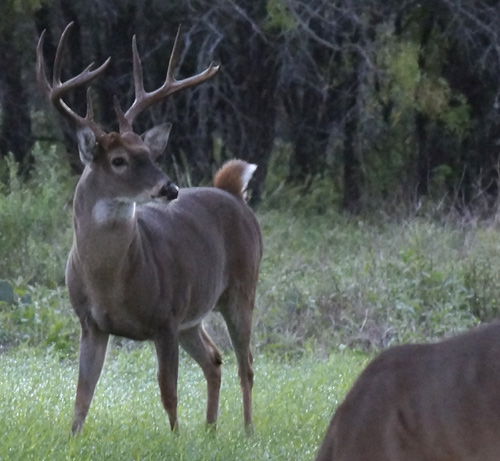 The deer were also surprised by him and they shuffled around quickly I took one picture … and quickly got my bow. One doe walked away and Number 9 followed her. The second doe followed too and put the kabosh on my brief shot opportunity.

The trio disappeared into the gulch.

Fifteen minutes later Number 9 came out of the woods to my left. I took his picture as he was standing under under my  Scrape Dripper from Wildlife Research Center. You can see light glinting off it in the pic below. 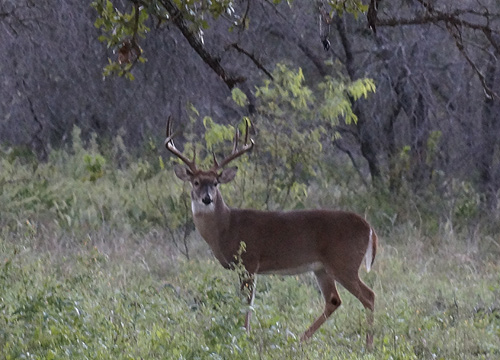 He advanced toward the food plot and stopped just outside of it. In a few seconds he was in bow range. Yikes, the Stuck Up buck stepped between us and was  in the way of a shot. I took another pic, one handed. 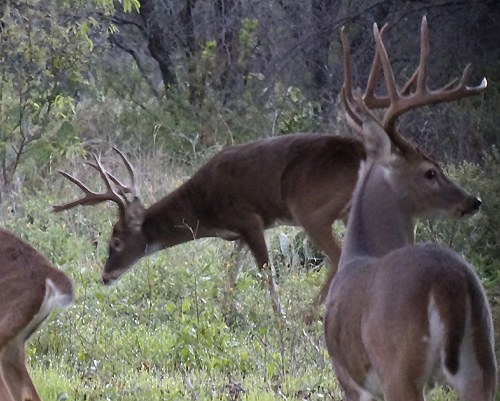 Number 9 was about 18 yards from me when Stuck Up and a doe got between us. I could not shoot but I was totally ready. Number 9’s nose passed over the ground and he separated from the little group and followed the scent. 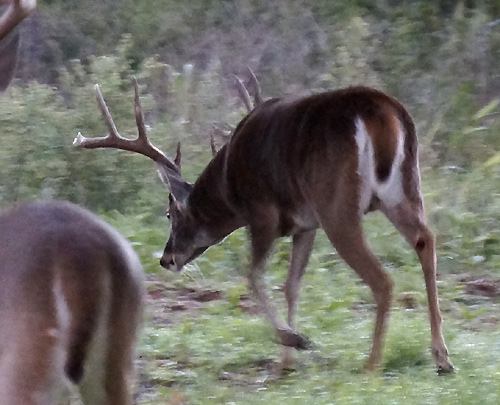 Again, there were deer in the way as he walked away. In short order he was in the woods to the north east. 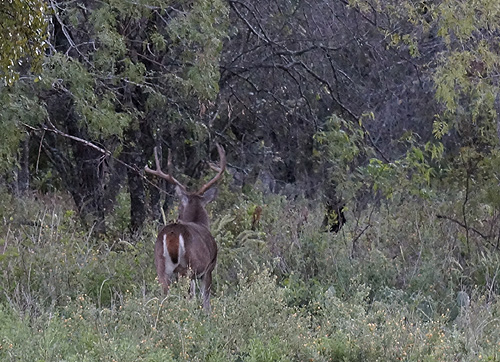 And he continued until he was out of sight. And this time he didn’t return.

I’ve said it before but I’ll say it again, the big ones are crazy lucky.

It was only a matter of days, or maybe only hours, before Number 9 would expand his range and go looking for does. Right now a little crazy luck on my end would be a good thing.

How To Clean Your Archery Release Aid

Evolution of a Deer Hunter