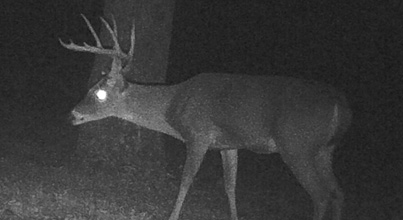 After Four Years I Get A Quick Opening At A Shooting Opportunity … If I Can put It All Together In Time.

After the November 7 close enouunter with the Number 9 buck he promptly disappeared for a few days — no sighting on my Spypoint cameras and no daytime sightings either.

On November 10, after my morning hunt, I checked my 3 Spypoint trail cameras that were watching 3 different scrapes that I knew about in my little valley. Number 9 got his picture taken during the dark, dark of the night, a little after midnight, near one of the scrapes. (See picture below.)

So I knew that he was still hanging around the area I was hunting. 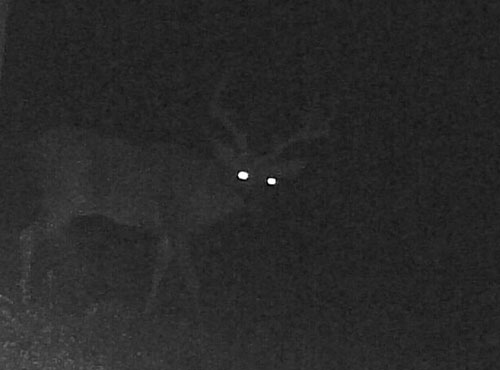 The next morning I got up extra early and was in one of my ground blinds 45 minutes before first light. Time passed slow … and sleepy. The dark finally changed from the  “can’t see anything” stage to the “can see faint shadows of deer moving that were close.”

A deer figure appeared near the scrape where the picture was taken. I looked at it with my binoculars but frankly couldn’t tell if it was a buck or a doe, there just wasn’t enough light, yet. The deer waited briefly and then walked away … and went right past me. When it moved I got the Leoupolds on it and could tell it definitely had a rack but there wasn’t enough light to make out any details. But I saw the red light on my Spypoint blink as he passed it and I knew he got his picture taken.

Later when I quit hunting, I picked up the SD card from the Spypoint before I went to the house and looked at the pics on the disk. Good News, I had a picture of Number 9. 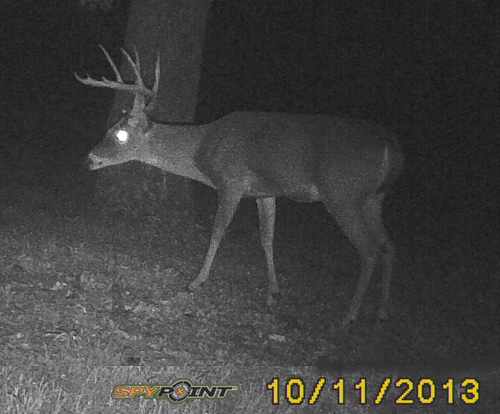 I’ve been in similar situations before when a particular buck I was hunting for disappeared during the rut and returned to my area in December, and I started picking him up on a trail camera site; but it was when the daylight was to low for a shot. Even after seeing those bucks too early, I continued to hang in. And, before, it paid off on the morning that he came through a little later than usual and it was early daylight.

So my plan was to get out extra early, just in case Number 9 came through when I was on the way to the blind — I did not want to spook him, that was my highest priority. (Spook him and he’d change routes.) Then I’d keep watch for Number 9 from the blind. Plus, I’d get the SD Cards from the 3 Spypoint cameras and see if I had pictures of him. Each morning I took my Leopold binoculars along because they can pick up images at extremely low light. (The the lowest light of any binoculars I’ve owned over the years.)

On the 12th he walked by me under 10 yards away. He stood around and watched, looking for does. I verified that it was him with the Leupolds. But there was no chance of a shot.

The 13th was a replay of the too early, not enough light scenerio.

THE DAY I’VE BEEN WAITING FOR…

On the 14th he arrived a little later than before. I got a good ID on his dark deer shadow with the binocs. Again, he came close.  But it was too early to shoot, still not enough daylight. He walked off, stopping and watching, as he went up the hill to the south.

Shortly after another deer shadow approached the closest scrape and pawed around. Then it walked in my direction. It had antlers but something was goofy about the main beam on his left side. The Leupolds showed that he had something caught on the left beam. It was wraped around it. He left before there was enough daylight to see what it actually was.

It got daylight enough to see around my little valley.

A deer in the woods on the hill to the south caught my attention. It cleared the treeline, running. Two large, yet unidentified but quite likely bucks, were behind the doe. I got the Leupolds on them; the buck with stuff wrapped around it’s left antler … and Number 9.

For an instant my brain teetered between grabbing my camera or my bow. I came to my senses and got my bow in hand.

The two bucks spread out and she took the only way out, the way to me. She stopped right in front of my blind’s shooting window. Both bucks closed in on her, Number 9 to the left and the other buck on the right.

Number 9 stopped to the left of my blind and walked toward the doe. He was 10 yards away but facing me. He made a quick half circle and was about 16 yards away when he stopped again. He turned and I saw a possibility of a broadside  shot coming up.

He turned just a little bit and, bingo, my broadside opportunity came down. I moved my top pin to the ribs and behind the right shoulder.

The arrow hit good and he and the other buck ran to the trees to the east. I sat still … feeling absolutely electric. And feeling at the same time, happy and sad. My 4 year hunt for this big, mature buck was complete.

I phoned my buddy Robbie Cramer and told him I’d just shot Number 9. “Stay where you are,” Robbie said, “I’m on the way to help recover him.”

I waited. In half an hour the sky broke open and it let go of a heck of a down pour. And when Robbie arrived an hour later it was still pouring rain.