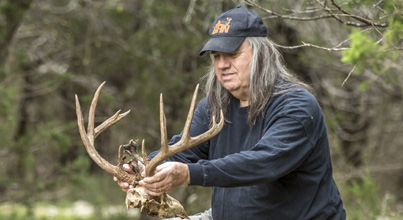 Half an hour after my shot it began raining hard. When my buddy Robbie Cramer arrived it was still pouring.

We started looking anyway. My arrow had gone almost to the bright yellow fletching so the broadhead had penetrated through his rib cage. It was laying on the ground, in the trail Number 9 had used to leave. It was broken. I picked both pieces up.

There was no blood on it. The rain had washed it totally clean. And whatever blood there had been in the trail I saw him run down was washed away too. Even the track imprints were almost obliterated.

We walked the 50 yards to the gulch where he had disappeared almost the instant he got there. It was still raining.

I looked on the right side of the gulch and Robbie searched the left.

Nothing. No sign of any kind. And no buck either.

I phoned my friend Jim Mitchell of Red Oak Ranch because he had told me about using a guy with tracking dogs. I got his name and called him, his name was Troupe.

Troupe was over an hour away but he said he could come over. He also explained that the rain might make tracking very difficult, depending on how long and how hard it rained. And he told me not to look any more than we already had, we didn’t need additional scent in the area.

The rain let up a little bit when Troupe arrived with two of his tracking dogs. He unloaded his main dog and we walked to where I had shot Number 9. When the dog didn’t pick up on anything I showed Troupe the exit trail and pointed ahead at my arrow, which I had left where I found them (something I always do).

Troup told me to stay behind and he and his tracking dog went to work.  Thirty minutes later he returned. So far, nothing. Troupe unloaded his second dog.

The next time I saw him was over an hour later. Still nothing, but he said his dogs seemed more into it on the north east corner of my property. I told him that sometimes deer changed directions and went to the west. So he took his dogs and checked out the woods in that direction. Robbie and I went also.

When daylight began fading we returned to my house. I paid Troupe as agreed and he left. Robbie stood in the rain and talked things over, then he said he would stay tomorrow and help comb the area thoroughly. Robbie had an App for his iPhone that charted wherever you went in the woods. I downloaded the app GPS Hunt to my iPhone and Robbie showed me how to use it.

It was still raining at daylight the next morning. We put on our rain gear and made a complete search of the 60 acre plot of woods to the west.

We took a break for lunch and made an organized search of the woods to the east, from my house to the east boundary fence. Still nothing.

Robbie had to return home and the next morning I again pulled on my rain suit and continued the search, this time further east on the adjacent property, which is the 1,000 acre deer lease I’ve been a part of for 29 years. The area I searched is the thickest on the property and it was a slow go.

A day later the rain slacked off and the next day it stopped. Now I kept my eye on the sky and watched for buzzards congregating above areas. That didn’t work out either.

I was absolutely sick about this. I’d been on the hunt for Number 9 for 4 years. Several friends has suggested that I didn’t have a good hit, a couple said that maybe I even missed.

Well, I saw my hit. I saw my bright yellow fletching in the vitals. My guess was maybe he wasn’t perfectly broadside and I only got one lung. And the buck went further than usual.

The County Road I live on ends on the lease. So far my search had been from the south side of the road to the river a few hundred yards away and 3/4 of a mile down to the end of the road.

The area south of the road is mainly a cow pasture, but a 150 yard wide finger of cedars and hard woods connects the dense woods on the river side to the woods on the rest of the property. This finger of woods has a farm fence on 3 sides. I started on the furthest fence to the south and walked to the road. And then walked along the fence that is adjacent to the road.

A handful of trails come out of the woods and go under the fence. When I was almost to the cow pasture I paused at a trail under the fence that was getting lots of traffic. I glanced around.

Straight down the trail … on a cross trail 40 yards away … I saw the rack of Number 9 sticking up.

It was not a pretty sight. Coyotes had ravaged the hide and meat from his bones.

I stood there, staring at the bones and rack. At the same time, I was elated … and incredibly sad … 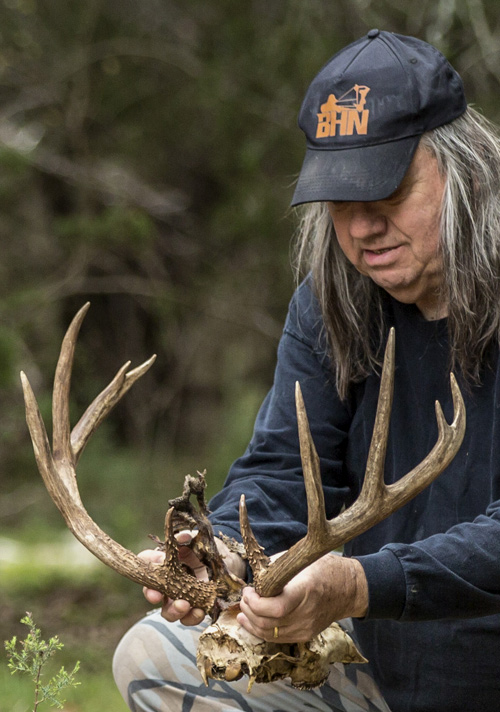 Be a BHN Writer

The Hunt For Number 9: The Wrap Up