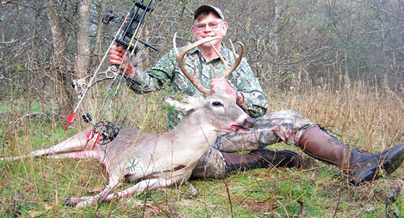 Occasionally, I have a few days to hunt alone. Being a pretty sociable guy, I thoroughly enjoy spending time hunting and fishing with friends that share my love of the outdoors but, sometimes it’s rewarding to be alone; alone and completely self dependent. Alone in the sense that if you don’t do it, it just doesn’t get done! As an outdoors writer, I spend a lot of my outdoor time on story assignments. Granted, it’s still hunting and fishing but there is always an agenda; an article for a magazine or newspapers or possibly a field test of a new product.

This past week I found myself, the first time in a long time, completely caught up with my writing and recording for my radio shows. With a whole week of “off time”, I decided to spend time hunting deer in the little patch of woods I have leased near my home. A ten minute ride from home in my Intimidator electric ATV puts me in the deer and hog woods.

I’ve been on this little lease for eleven years now and have never loosed an arrow at a deer. I usually have the opportunity to harvest deer on several of the ranches I work with on story assignments and have always left the deer hunting here for family members. I did walk up on a buck that was later harvested and scored 172 BC though. Bowhunting is my passion and on this occasion, I was toting a .270 rifle I quest of a wild hog for the smoker. As I eased through some heavy brush into the edge of a little clearing back I the woods, I noted movement off to my right, in some heavy cover. I saw the glint of sunlight on antler and instinctively flipped the safety off the .270 and picked an little opening in front of the buck. The monster 10 pointer stepped into the opening and I centered the crosshairs on his shoulder. The range was a mere 55 yards and it would have been a chip shot but I hesitated a few seconds and the bruiser buck vanished, as they have a way of doing.

I was thinking that even a buck this big would not have been a trophy to me, not killed with a rifle. I must admit that I had afterthoughts on the matter and at times wished that I had pulled the trigger. But opportunities such as this are fleeting and one must seize the moment when hunting mature deer. How do I know the buck scored 172 BC? The fellow down the slough killed him the next week and invited me to come over and admire the buck’s antlers. It was the same 10 point that has become firmly engrained into my memory banks. But, I never mentioned to him that I’d seen the bruiser buck. No need to take away from his excitement of having harvested the biggest buck of his life.

This past Tuesday morning found me in my favorite ladder stand overlooking some heavy cover, the kind of cover that late season bucks like to travel. I spent ten minutes enjoying the day coming to life. A serenade from a hunting pack of coyotes broke the quietness and then the symphony of birds and chattering squirrels joined in. High overhead, I head a flock of Canada geese making that ancient chatter they do in flight. A red tailed hawk flew over at treetop level and sounded that piercing scream intended to frighten prey on the ground and in the trees into flight. And then, with absolutely no warning of his approach, appeared a fine 8 point buck. I appraised him quickly and ascertained he was a 3 year old. His rack would win no big buck contests but he was big of body and had some age on him. A typical 8 pointer before the rut, he now sported 7 points. He’d broken one in a recent fight over breeding rights. What occurred in the next fifteen or twenty seconds remains a blur in my mind. I am convinced that a hunter, especially someone hunting with a bow, tunes out everything during the fleeting seconds leading up to releasing an arrow at game.

I found my Darton 3800 compound bow had somehow come to full draw and the moment when the buck stopped at 19 yards and glanced back over his shoulder at his back trail, as bucks often do, my 20 yard pin had settled on a spot just behind the buck’s shoulder. Some unknown force squeezed the release and the next thing I remember was hearing that “Ker-thunk” sound that denotes a solid hit; my arrow sticking in the ground on the offside of where the buck had been standing. In my subconscious, his departure and the sound of him going down was recorded. I found the buck 48 yards from where he was standing, a short trailing job indeed! A broad head such as the 3-bladed Innerlock EXP mechanical I shoot is every bit as lethal as the best designed rifle bullet. 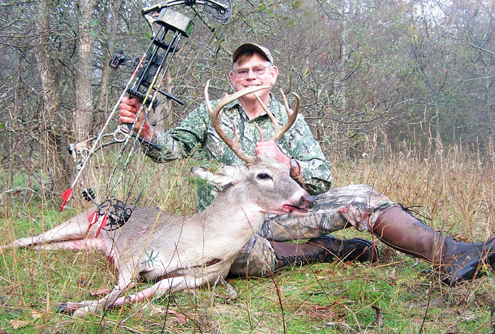 Am mentioned, my buck was packing plenty of prime venison. He would be a handful to drag. After a quick field dressing job, I ascertained the easiest way to get the heavy buck out and on to the skinning rack we have constructed a few hundred yards to the north. I remembered a little clearing about 80 yards away. I could back my electric buggy into the spot and get him out without too much effort. I was in no hurry on this hunt. The weather was cold and there was no rush getting the meat on ice. I took my time skinning and quartering the animal and back at the house, allowed the meat to chill a couple days before I began cutting the prime venison into steaks, ground meat and roasts.

The butchering and later cooking of game is almost as enjoyable to me as the hunt and I did not rush the task. Some of the steaks, I cut for chicken frying, about a half inch thick. I tenderized each steak and then sealed them in vacuum freezer bags. I cut some of the backstrap steaks an inch thick. These, I tenderized and seasoned well with my favorite dry seasonings and rubbed them liberally with olive oil. After spending a week or so in the frig, they will be wrapped in bacon and subjected some hot hickory coals.

The processing of this buck was actually several weeks in the planning. I had enough German salami seasoning to make 25 one pound casings of sausage. The front shoulders and trimmings from cutting steaks made about 15 pounds of lean, ground venison. The venison, mixed with 10 pounds of ground pork, was soon stuffed into the casings, allowed to cure overnight and then placed in my Smokin Tex electric smoker set at 140 degrees. Cured meat can be slow smoked at low temperatures. If subjected to high temperatures, I would have had cooked ground meat, not salami. After a total of 14 hours of low heat, I had created some great tasting home made salami. The target temperature for smoked sausages is 152 degrees and it takes many hours of low heat to get it there. I had the smoker set at 175 degrees for the last couple hours.

Just yesterday, I made chopped BBQ from the neck roast. Many hunters are not aware that the neck roast is one of the better cuts of venison but it has to be slow cooked in moisture. I began by placing the seasoned neck roast in an open foil pan and allowing it to smoke for a couple hours. Next, I placed a liberal amount of KW’s BBQ sauce on the roast, placed a few bay leaves on top and covered the meat with bacon. A tight wrap of heavy duty foil and into the smoker for 8 hours, then I turned the roast, subjecting the top half to the liquid. Another 8 hours at 225 degrees and the finished product was about 6 pounds of prime venison chopped BBQ! Drain the liquid from the roast, chop the meat and add fresh BBQ sauce. Some of the best tasting BBQ on the planet!

Yes, after a long wait of many years, I finally decided to harvest a buck close to home. After reading the account of this hunt, I think you can fully understand just how much I enjoyed the entire experience, everything from loosing the arrow to preparing the meat. May this lifestyle go on for a long, long time!

Listen to Outdoors with Luke Clayton each week at www.catfishradio.com . Join Luke and his guests Larry Weishuhn and Bill Dance as they discuss living the outdoor life. Email Luke with news from your area via the web site. 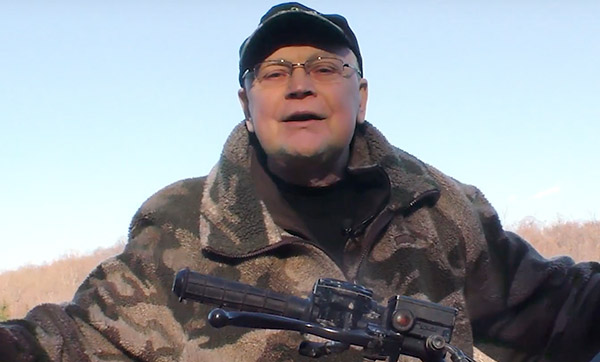 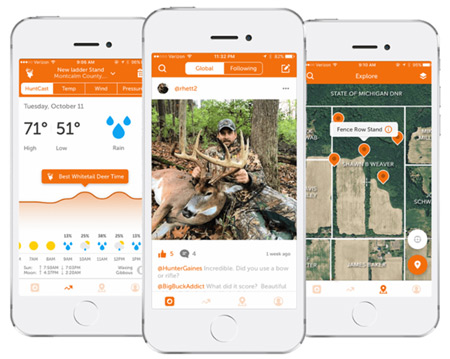 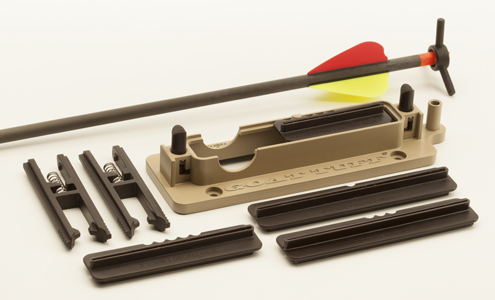