The Story of One B&C Generation Next Winner

by Stephanie Mallory
in Bowhunting Posts
0 0
0 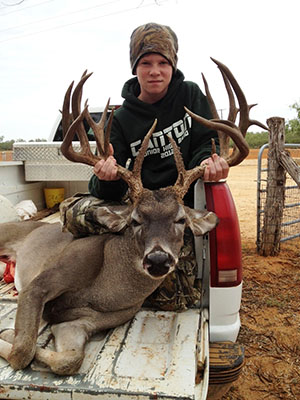 Not many 14-year-old boys can say they’ve harvested a 200-class buck, but Matthew Allen of Canton, Texas, can. Last year, Allen became a Boone and Crockett Jack S. Parker Generation Next award winner along with other young people who’ve taken outstanding trophy animals over the past few years.

Keith Balfourd, B&C Club’s director of marketing, says 160 kids, 16-years-old and younger, have had their names and their trophies added  to the record book of native North American big game in the past three years.

“The Jack S. Parker Generation Next program is one way Boone and Crockett is recognizing our next generation of hunter-conservationist, which is critical to the continued success of North American conservation,” Balfourd said.

Allen attended the awards ceremony and says he enjoyed the event and meeting the other young hunters.

“I saw it as a good chance for kids my age to show off their hunting accomplishments to fellow hunters,” Allen said.

Allen’s encounter with the giant buck, which grossed 212-1/8 and had a final score of 202-1/8 non-typical, was pure chance. He was hunting on a family friend’s property in Demmit County, Texas, during the 2012 youth hunting weekend, when he spotted the big buck.

“I was hunting by myself on the same property I’ve hunted since I was a young child,” Allen said. “Right before legal shooting light, I saw a large buck step out at about 75 yards. I could tell he was big, but I had no idea just how big.”

Allen waited several minutes past legal shooting light before he took a shot at the deer with his .223 Savage. The deer ran 25 yards and then dropped.

Upon closer inspection, Allen discovered he’d just taken the trophy of a lifetime.

“I was surprised by the size and number of points on the rack,” Allen said. “I immediately took a photo of the buck with my cellphone and texted it to my dad, who was on the property hunting as well.”

Upon seeing the picture, Allen’s dad, Tommy, wasted no time. He didn’t even take the time to send a return text. He just hurried to his son’s hunting location to get a good look at the deer.

“We were both so excited,” Allen said. “My dad kept saying, ‘that’s the biggest buck I’ve ever seen!'”

Allen and his dad decided to pull a prank on the generous landowner who’d let them hunt his property for free for many years.

“I called and told him I’d shot a cull buck, and to come and check it out,” Allen said. “Of course, when he saw the buck, he became extremely excited and happy for me. He’d shot a 176-class deer on the property once before, so we knew there were big deer there, but no one had ever seen the big deer I killed that day. We have no idea where he came from.”

Allen says the possibility that he’s most likely already taken the biggest buck of his life does not diminish his excitement for future hunts.

“There’s always something out there that’s bigger, “Allen said. “That buck was 7 ½ years old. If he could make it to that age and size, other bucks can too.”

Leica Sport Optics is a proud sponsor of the Jack S. Parker Generation Next Awards and understands that kids like Matthew Allen are the future of the sport.

Terry Moore, vice president of Sport Optics for Leica, said, “Youth hunters play an invaluable role in the future of hunting and in big-game conservation and management efforts, and we stand behind the Boone and Crockett Club’s efforts to encourage youth to pursue their passion for the out of doors.”