‘GRUBS’ Boots: What to Wear Outdoors

by Jen Jenkins
in Bowhunting Posts
0 0
A A
2 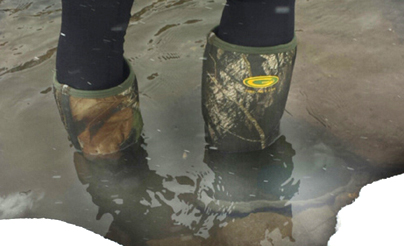 I may be a 25 year old female with two kids but I can say without a doubt, jumping in mud puddles is still my favorite thing to do. Aside from hunting and fishing of course. Now, the only difference is I’m a little more of a wuss. It used to be I would break the ice on a puddle, then jump in the mud in my tennis shoes and not care that frost bite was slowly starting to form on my toes. Now, I enjoy jumping in mud puddles in the safety and warmth of my Grub’s boots. I’m a woman and I have a lot of pairs of shoes. Probably not the same as what most women have, I have a large collection of hunting boots and flip flops. Ever since I have gotten my Grub’s boots, my hunting boots seem to just sit in my closet. I have a couple other boots that are supposed to compare to my Grub’s but now the only thing they do is collect dust.

There really isn’t another boot on the market that is actually comparable. Of course, Grub’s has been making boots since 1776 so I guess you could say they have had a lot of practice at getting it right. And they certainly have gotten it right. Grub’s are, without a doubt, the most comfortable boot I have ever owned. They seem to almost mold to your feet like one of those tempurpedic beds and you can walk and walk and walk and your feet stay dry, warm and extremely comfortable.

I got the boots to use while hunting and now they have kind of became my ‘do everything – wear everywhere’ boot. I work on a ranch and I also work construction and with as diversified as the boots are, I can wear them for almost everything I do outdoors. When we branded on the ranch this year, instead of sinking to my knees in cow umm.. stuff… I was able to walk through it and not feel it squishing between my toes. While operating the haying equipment, moving cows, roofing, hunting, fishing, grocery shopping, you name it and I have worn these boots while doing it. I guess I should throw in some of the actual specifics of the boot rather than just going off on my girly, “ Oh my gosh these boots are like totally the greatest thing like ever” spiel.

The boots that I have are the Treeline 8.5. The 8.5 means the boots have 8.5mm of insulation. They are tested from +60 to -40 degrees Fahrenheit. Which is a typical November day here in Wyoming. It has 5mm of light buoyant insulating foam and 3mm of highloft, which is the stuff that makes me think of those tempurpedic beds that form to your body. Which I actually just googled and it is exactly like the stuff they use in the memory foam beds. My feet don’t lie! Then .5mm of moisture wicking polyester fleece lining. The soles of these boots are what really surprised me as well. They have a self-cleaning system so that stuff doesn’t get built up and cause you to lose traction. I don’t believe there is another boot made today that has this critical component.

They are also built to help with some awesome shock absorption. You don’t feel anything but the grip these boots have when walking over uneven surfaces. My next favorite thing, as if you were dying to know, is the No-Rip upper part of the boot. That is something that I have noticed a lot with these style of boots, you catch them on something simple and they rip. Then there goes a lot of your insulation and waterproofing. It’s hard to keep water out if there’s a big hole, even if you try putting duct tape over it. I have snagged these boots on everything, I’m super clumsy so I am always falling over just about everything in my path. Regardless of the cruel and unusual punishment I have put these boots through, in the year that I have had them, they still look brand new. I wouldn’t recommend any other boot to anyone. Once you actually try on and own a pair of the Grub’s boots, you won’t turn back and you definitely won’t regret it.

Be sure and check out the best boots made at Grub’s Boots  and for more from Jen just go to: Jennifer Bickel