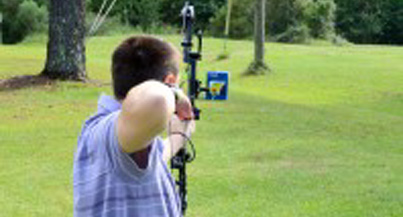 The Mathews web site has a section for Tips for Bowhunters and Archers. The tips come from various Mathews Pros who have submitted lots of first rate, easy to read, advice that can make us all better shooters as well as bowhunters. This first Tip has lots of excellent advice about How To Practice For Bowhunting. 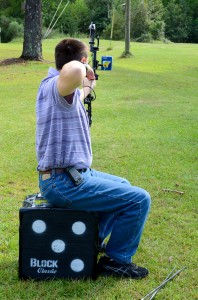 Do you practice shooting your bow from a seated position? Most bowhunters don’t, and most bowhunters will get caught flat-footed, or maybe we should say flat-bottomed, at some time during the season.

How a 200-plus pound whitetail can appear in bow range out of nowhere is one of the worlds big mysteries, but chances are you are going to be faced with having to take a seated shot. Next time you’re practicing, take a small stool and make several rounds of shots while sitting. Even better, if you can hook up the seat section of your tree stand and shoot seated from that, even if just a foot or two off the ground, do it. This little bit of practice will make all the difference in the world, especially for an early season hunt. Preparation and practice will help you increase your chances of harvesting that big buck this season

“Practice shooting your bow at two to three times farther distances than you plan on shooting at a deer. When you can stack tight arrow groups at 60 yards in practice, shooting a buck at 20 yards seems much, much easier.”

“Don’t pull the bow away quickly to watch the animal. Continue to look at the sight picture.”

“Practice archery shots on 3-D targets and always shoot odd yardages. Practice using the 30 yard pin to shoot at 27 or 35 yards. Rarely is a big-game bowshot at an even yardage.”

“If you peep sight moves even the slightest it can greatly affect your accuracy. Use a drop of white out to mark you peepsight location.”

“Make sure your bow has light enough poundage so that you can make a smooth draw in an awkward position in a tree stand, if needed.”

“Make sure your draw length isn’t too long. Especially in late season when you have on heavier bulky clothing. Its better to have draw length a little on the short side than to long.”

“When the moment of truth is upon you, focus on an area in the vitals the size of a quarter. This will help you control your excitement.”

“If you shoot a 30-inch draw length,take it down to a 28- or 29-inch draw. You will find that it is a lot easier to control and hold your draw. Your anchor point and arm will be in a better position to help you become a better shooter.”

“Practice in low light conditions, and in the nastiest weather conditions, with skeeters trying to eat you alive! Make it very difficult.”

Visit Mathews Inc on the web at MathewsInc.com. and see the new Mathews Creed XS, the Monster Chill R, the CT-Series ArrowWeb Quiver and other Mathews bows and products.

Video of the Week: Find Your Game with HuntForce