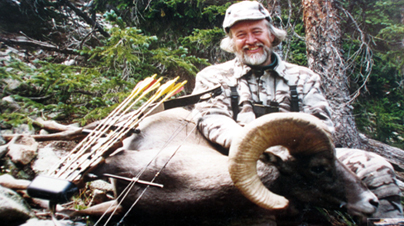 I RECENTLY GOT THIS CRAZY IDEA: “Why not book enough bowhunts this year and next to finish up the so-called “Super Slam?” That means legally taking at least one each of the 29 North American big game species recognized by the Pope and Young Club. Never mind it’s taken me 50-plus years to collect more than two-thirds of them without consciously trying. And despite having maybe 25 good years left to finish the task, I figure I can wrap it up before 2016 if I put my mind to it. After all, I’m officially retired and have ample time to complete my quest. Besides, my family doctor says that at age 73 I’m in better physical shape than most of her 40-something patients. And, thankfully, Janet and I have few debts, which means there’s enough money in our bank accounts and conservative investments to underwrite any hunting adventures I might choose to make. Indeed, why not finish what I unknowingly started in November of 1963 with my first P&Y whitetail?

Call it a personal challenge. Or an old bowhunter’s dream. Whatever it is, it’s an idea that’s been tucked away in the recesses of my mind ever since Chuck Adams made bowhunting history in 1990. That’s when Chuck arrowed an Idaho mountain lion nearly two decades after launching his own “Super Slam” quest by dropping a blacktail on a 1970 bowhunt near his northern California home. And after Jimmy Ryan, Dr. Jack Frost, Tom Hoffman, and Gary Bogner etched their names into the mythical “Super Slam” annals, my interest was definitely piqued. Later still, having Tom and Gary give personal tours of their New York and Michigan trophy rooms, and viewing Jimmy’s big game dioramas at Bass Pro’s mega-store in Springfield, MO, I was duly impressed and inspired. Seeing Jack’s photos of his impressive trophy displays in his Alaska home further fanned the flames. 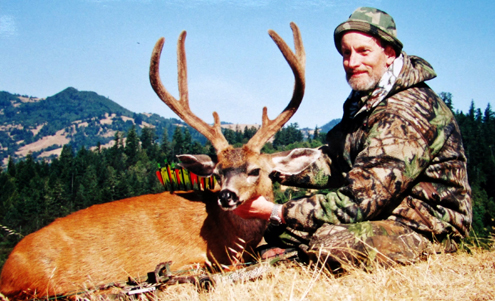 It was time, I decided, to go online and check www.cabelasoutdooradventures.com and call ol’ buddies Mark Buehrer and Neil Summers at Bowhunting Safari Consultants to see about pursuing my dream.

ADMITTEDLY, I’VE BEEN TRULY BLESSED to serve as BOWHUNTER Magazine Editor/Founder for 35 years, already arrowing all three of our continent’s moose species, each a record book bull. I’ve also tagged most of the deer and elk clan, bison and muskox, as well as four of the five varieties of northland caribou. I’ve also taken mountain lion and bears, pronghorns and mountain goats. So why not start with a 2014 summertime bowhunt for a mountain ‘bou, the lone remaining caribou species I need? And while I’m near British Columbia and Alaska, why not hunt Dall’s sheep to pick up my third trophy ram of the four species of wild sheep? Next I could plan a late-year bowhunt for desert bighorn, and with a bit of luck, complete my sheep slam? Seemed to me a logical place to start.

Likely, I’d already have my mountain caribou if I hadn’t injured a knee the week before I was to leave on a booked hunt in the Territories. I had to cancel that trip and ended up too busy to rebook in following seasons. As I recall, that late 1990s caribou bowhunt would have cost me about $5,000 plus air fare and tag. A quick check of today’s prices revealed I could make the same trip to the Mackenzie Mountains for $8,500 for the hunt and another $1,500 for travel. Call it an even $10,000. Okay, so what about heading north weeks early and trying for a Dall ram on the same trip?

Hmmm! Seems bowhunting a beautiful snowy white sheep would jack up my tab in a hurry. Research revealed I could get by with spending another $14,000 to $22,800 to try for a Dall ram. And if later I opted to head south to Mexico and bowhunt elusive desert bighorns, I could expect to shell out $52,800 for that hunt, after plunking down $5,800 for a coveted sheep license. And speaking of sheep, I dug up the current costs of hunting Stone’s rams and Rocky Mountain bighorns. I’d tagged both species in the ‘90s, paying about $11,000 for the Stone hunt and perhaps $2,000 for the Colorado bighorn (after drawing a nonresident license and sharing the do-it-yourself adventure with pals Marcus Nichols and Marv Clyncke. Marv provided use of his high country cabin and helped locate stalkable rams). If I booked similar hunts now, the Stone sheep adventure would run between $30,000 and $35,000, and a guided bighorn adventure would cost upward of $28,000 to $30,000.

Digging even deeper, assuming I wanted to spend more of our kids’ and grandkids’ inheritance, I could easily arrange an Alaskan brown bear bowhunt for somewhere between $13,000 and $23,500. And if I opted to add a polar bear hunt to my 2015 bucket list, that’s another $29,000 to $35,500. And I’ve never hunted California for Tule elk or Alaska for Sitka blacktails. A guided Tule elk hunt carries a $17,500 price tag, but Sitka blacktails can be pursued much more economically by teaming up with an Alaskan hunting buddy for a do-it-yourself adventure, or by paying a guide from $800 per day up to maybe $6,000 for fully guided hunt, transportation not included.

Bottom line, for just under $100,000, I could book five 2014 bowhunts – mountain caribou, Dall’s sheep, Sitka blacktail, Tule elk, and desert bighorn. And then in 2015 I’d have a realistic shot at finishing my personal Super Slam by taking an Alaskan brownie and polar bear – for another $50,000. Of course, I know all too well that I’m simply booking hunting trips, not buying the animals I’d be hunting. I have friends who’ve hunted mountain sheep and giant hump-shouldered bruins multiple times without releasing an arrow. And at $20,000 to $30,000 per hunt, it’s relatively easy to spend tens of thousands of dollars without anything but memories and photos to show for their money.

It was about this point that I began wondering how best to break the news to Janet about wanting to budget $150,000 to $250,000 for upcoming hunting trips over the next couple of years. My wife, you see, is our family’s bookkeeper and sometimes can be hard to convince that I need to spend our money chasing dreams. Go figure. 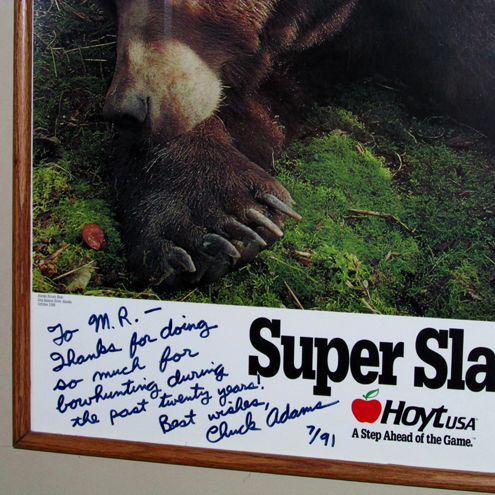 OKAY, I ADMIT I’M A BOWHUNTING GEEZER who recalls paying $10 apiece for a nonresident Colorado deer and elk licenses back in 1965. In fact, unable to find any Hoosier hunting buddy to join me on my first ever out-of-state bowhunt, I’d booked a semi-guided “budget” hunt in the Book Cliffs near Rifle. Driving solo from Indiana, I hunted about three hours on opening day before arrowing a 3×3 velvet-racked muley. The total cost of that successful adventure – $90 for the outfitted hunt (not including grub I bought to cook myself on a Coleman stove), gas for my car, one night in an $8 motel room en route (I drove the 1,200-plus miles straight through on the way home), meat processing, and ice for my coolers – amounted to just over $250. And taking my first record book mountain lion in 1970 cost me $650 for the guided hunt, cat license, and airfare to and from Grand Junction. The next summer, driving to Colorado for a successful black bear adventure with my wife, Hoosier hunting pal Jack Reinhart, and BOWHUNTER photographer Steve Doucette, cost under $1,000.

Obviously, bowhunting-related costs have skyrocketed over the past five decades. That’s true of bows, arrows, broadheads, camo clothing, boots, licenses, guided hunts, and taxidermy, as well as most everything else. And I don’t expect that to change in seasons to come. Fact is, anyone dreaming about a “Super Slam” needs to have lots of money in the bank or sponsors with pockets deep enough to pay the way. As for me, it’s something to dream about, and I fully expect to book at least a few more bucket list hunts that I hope to make before hanging up my bow. 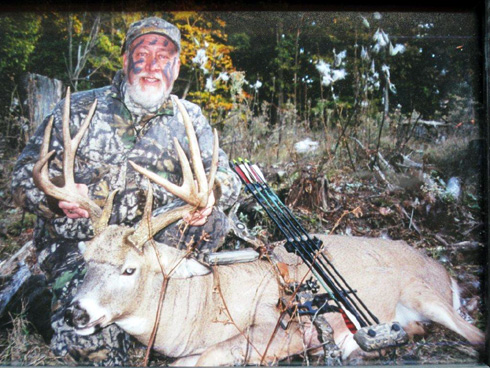 Regardless, I have to ask myself if I really want to pack my gear and jet off across the continent to experience multiple big-money bowhunts, when I can walk out our back door and climb into a favorite whitetail stand only a few hundred yards away. Or do I hop in my 4WD for an 85-mile drive across the Wabash River to a good friend’s farm just outside my Illinois hometown? It’s a super place in its own right, a slice of deer heaven just over an hour’s drive from our own farm. Don’t laugh. I’ve seen more record book bucks there in recent years than in any whitetail hotspot I’ve hunted during the last half century.
Hmmm! That’s going to be a really tough call and one that needs more thought. Somehow I already know which choice my wife would prefer.

Honestly, I doubt that I’ll ever claim a Pope and Young Club World Record animal or complete my personal “Super Slam.” A woodland caribou I tagged in Newfoundland in 1999 did earn Safari Club International honors as SCI’s Number 1 trophy woodland archery stag, and a muskox bull I arrowed in the Northwest Territories in 2000 missed tying the P&Y World Record by an mere inch. But while I admire large antlers, horns, and skulls and am proud of each record book animal I’ve taken, I’ve never been driven to collect the biggest and most. The regrets I have are too few to mention. And now in the twilight years of a lengthy archery career, I’m content to pursue my primary passion – bowhunting whitetails. I consider myself fortunate that my job as an outdoor magazine editor and writer – as well as my long involvement with the Pope and Young Club – allowed me to participate in what I sincerely believe was and is the Golden Age of Bowhunting. Two of my bowhunting heroes, Roy Case and Glenn St. Charles, lived into their late nineties and hunted as long as they were able. Afterwards, each man continued to actively support and promote the sport they loved. My simple goal is to do the same.

If you like to read M.R.’s bowhunting adventures you will love his newest book, ‘Hunting the Dream’ – now available at Amazon.