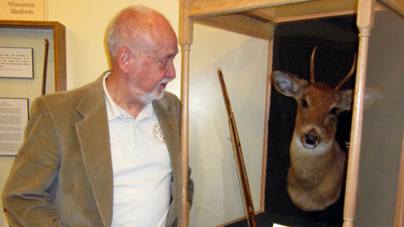 MOST OF US have bowhunting heroes whose names are forever etched into the history of our favorite sport. Fred Bear. Howard Hill. Ben Pearson. Doug Easton. Pope and Young. The Thompson brothers, Will and Maurice. “Chief” Compton and other iconic notables were the true archery pioneers and trailblazers, whose well documented exploits with the stick and string are deserving of our admiration and respect.

Think about it. Who are your own personal heroes? And why? Now I’ll tell you about a favorite of mine, and why I always list his name among the most influential bowhunters I’ve ever known.

BORN IN 1888, WISCONSIN ARCHER ROY CASE was already 51 on the day I was born, December 6, 1940. Incidentally, that day was the 10-year anniversary of the date when Case made bowhunting history. How? By becoming the first licensed bowhunter to successfully take a deer anywhere in North America. For the record, he killed a 112-pound spike during the 1930 northern Wisconsin rifle season using a homemade 54-pound longbow and handcrafted wood arrows, each shaft fletched with barred turkey feathers and tipped with shaving-sharp two-blade Kiska broadheads he’d designed and made himself.

Moreover, by the time Roy Case took the 20-yard shot that dropped that young buck, he’d already spent much of his adult life practicing and promoting archery in around his Racine, Wisconsin, home. First influenced by Dr. Saxton Pope’s classic 1923 book, “Hunting with the Bow & Arrow,” he soon started making bows, arrows and hunting points. He also helped organize his state’s very first archery club in 1927. Then in 1929, working with like-minded archers, Case helped convince skeptical Wisconsin wildlife officials to allow the use of hunting bows during deer season.

Building on his 1930 bowhunting success, he and fellow members of the Wisconsin Archery Association – including future Hall of Famers Aldo Leopold and Larry Whiffen, – pressed the state’s Conservation Department to establish a special bow and arrow season. In 1934, Wisconsin became the first state to designate bow-only hunting zones. Licenses were $1 and the bucks-only season lasted 5 days. Forty archers participated and only one deer was tagged, but it was the beginning of a hunting idea that in due time would spread. Next to Oregon in 1935 and then Michigan in ’37, and eventually on to every state and province across North America. Kansas became the final state to announce a deer season in 1965.

Long known as the “Father of Wisconsin Bowhunting” and a founding father of the Wisconsin Bow Hunters Association in 1941, Roy Case made numerous contributions to archery not limited to his home state. Between the late 1920s and the early 1950s, he designed, manufactured, and marketed more than a dozen different model Case broadheads. He also wrote and published hunting stories in Ye Sylvan Archer, the country’s first widely successful archery magazine, printed between 1927 and 1943. Case is widely credited as the man who coined the term “bowhunter” for archery enthusiasts who pursue game animals with bows and arrows.

Want more Roy Case trivia? When Wisconsin Conservation Department officials set standards for broadhead size requirements, they used the Case Kiska’s width (i.e., seven-eighth of an inch) as the legal minimum. This standard was later adopted by many other states across North America.

WHEN BOWHUNTER MAGAZINE was first published in 1971, I sent Roy Case a copy along with a note of appreciation for all he’d done for archery and bowhunting. His thank-you note wishing me well with my magazine was much appreciated. A signed photo showing him posing with his 1930 history-making buck is still proudly displayed in my home office.

After all, this was a man whose long and active life spanned parts of two centuries and left an indelible imprint of the fabric of a great sport practiced by millions. By the time I got to know him, he was in his 80s but still an active bowhunter. Case mentioned to me he’d filled his deer tags four of the last five years and also had traveled to Alaska where he killed a caribou. He finally passed away in 1986, two years short of his 100th birthday.

Talk about a fulfilling and meaningful life well-lived! We bowhunters are truly fortunate to have such heroes! Should you ever visit the Archery Hall of Fame Museum in Springfield, Missouri, make time to check out the “Wall of Fame” where an etched likeness and short biography of each inductee are displayed. Spend an extra minute or two at Case’s memorial, and if you happen to share my admiration for the lifetime accomplishments of a personal hero, offer silent thanks for what Case did to make bowhunting what it is for all of us.