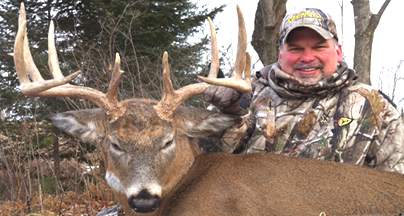 Hunting for a living seems like a dream to most but in reality it’s hard work. Like any other job, a professional hunter’s paycheck is ultimately based on their performance. Similar to working overtime at the shop, the late season hunting scenarios are not usually the best time to tag a big whitetail. By this time in the year, every deer in the county has been pressured, harassed, shot at and obviously some have been killed so there are fewer of them around. The last thing these deer feel like doing is getting up and prancing around on their old pre-rut trails.

While many whitetail enthusiasts are nursing their hunting hangovers on the couch watching football, diehards Bob Richardson and Larry Woodward of ScentBlocker’s Most Wanted are still out working to fill tags. I spoke to Larry recently about their strategies to kill that last minute buck.

Find the Food:
“At this point in the season, everything is about food.” Larry made it pretty plain and simple. After a long and grueling rut, most of these bucks (similar to us hunters) simply have two things in mind – eating and recovering. The strategy here is simple – find the preferred food source and hunt it. Most deer will be bedding close, to conserve calories. If there’s thermal cover nearby to keep them warm, that’s a bonus and almost a certainty that the deer will be bedding there. Be patient, as usual, the bigger bucks tend to show up last.

To help stack the odds, Bob and Larry like to plant Whitetail Institute brassicas such as Tall Tine Tubers specifically for the late season. They lay out these small plots with the cold winter winds in mind, so their access and entrances will go unnoticed by the whitetails. Brassicas such as chicory and turnips tend to sweeten up after the first few frosts and offer the whitetails a delicious treat long after the corn, beans, and acorns are gone.

Where and when it is legal, baiting late season deer is also a successful strategy. When baiting, always consider the wind, stand location, and where deer are expected to come from. Be sure to maintain the site for best results. Quite often, especially in the coldest of weather, dominant bucks will compete for food sources. So, keep the deer interested by frequently tending the bait site.

Find Them:
After the rut, many bucks return to their late summer/early fall areas. “We start looking for bucks in their pre-rut core ranges.” Woodward shared. They recommended that when a late season food source has been located, to start taking an inventory of the local deer by hanging trail cameras along major travel routes to the food. Larry also mentioned how much he liked the “Guard Duty” feature on his Cuddeback cameras. The benefit that the guard duty feature offers is constant daylight surveillance of a food source. Larry prefers to set the camera directly on the food source, taking 3-4 pictures a minute, monitoring a wide area. Sometimes the pictures aren’t extremely clear if the animal is far off, but more often than not- if it’s a shooter whitetail his antlers will be easy to identify. Many trail cameras offer this constant surveillance feature. This feature is only useful during the daylight hours, but that’s really what you need to know anyway. If a buck is only showing up at a food source after dark, it’s probably not a good use of time hunting him there.

Stay Warm:
One of the biggest advantages to late season hunting can also be a double edged sword – the cold weather. Be sure to dress warm and use a layered approach. Try to get to the stand or blind with the minimal amount of clothing on to ensure not a single drop of sweat is cast. Then, get completely dressed for the long, cold sit. ScentBlocker offers great late season gear such as the Alpha and Outfitter series. Technologies such as WindBlocker and RainBlocker make these garments weatherproof, while the warm fabrics and scent control capabilities make them the complete package.

When looking at the weather, the colder the better. In the late season, deer will often hit the food sources earlier on the coldest days. Also, pay attention to incoming storm fronts. Deer will sense the approaching change in weather and will often try to stock up on calories so they can be warm and ride the storm out.

Scent Free:
As with any hunting situation, it is extremely important to remain scent free in the late season. First, it’s simply the best hunting practice. From the season opener to its close, we hunters need to continue to do our best to be invisible to the deer we’re chasing. Second, these deer are sick and tired of human pressure. They do not have a lot of patience for foreign odors and quite often don’t stick around to investigate. Lastly, the thermal effect is at times nonexistent during the late season. When the once raising and lowering thermals would help a hunter, now they pretty much work against us. Quite often a hunter’s scent simply falls to the ground, rides the wind a bit, and pools up nearby. No matter how hungry a deer is, they’ll still freak out when they smell human scent in their core area.

Continue to practice scent control protocol as usual. Be sure to properly wash and store all hunting gear. Use scent free liquids and shower before each hunt. Spray down external gear with scent eliminating sprays such as ScentBlocker’s Ti4. We’ve worked too hard and put in too much time to make silly mistakes this late in the game.

Sleep in:
This strategy is sure to be a favorite of many. “In my 40+ plus years of hunting, I’ve come to the conclusion that hunting the mornings in the late season really isn’t that productive for me.” Larry shared what a lot of other hunters have come to believe as well. The coldest parts of the day are often in the sunrise hours of the morning. Often, the deer will have long ago crept back to their bedding area, leaving the food sources void of any activity. Not to say deer can’t be killed in the mornings, because they can. However, Bob and Larry feel it’s the best use of their time to stay home, reconnect with loved ones, catch up on chores or other business, and get on stand early in the afternoon.

Hang in There:
When the late season rolls around, it’s the hunter’s “4th quarter”. Hang in there and keep hunting hard. This is often the time when massive bucks are killed. The end is near. Soon it will all be over and like the deer, we’ll have the rest of the winter to recover.

As always, be safe, stay warm, and have fun!