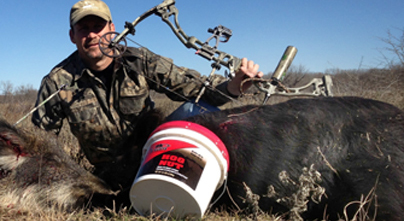 Sponsored by: In Sights Nutrition

Hogs are friend and foe. Our country is virtually being overrun by feral hogs, or at least Texas is. It is estimated that there are 4 to 6 million feral hogs wreaking havoc across at least 39 states. Given the fact that feral hogs are primarily nocturnal, these estimates could be on the low side. Texas is believed to have over half the population of feral hogs in the U.S. You might say we are having a pork population explosion of epic proportions.

In Texas we have feral hogs, Eurasian Wild Boars (often called Russian boars) and lots of hogs that are hybrids of the two. Feral hogs were domesticated hogs that have gone wild or were released as long ago as when the Spaniards arrived in the early 1500’s. Over time these feral hogs have grown longer hair, longer tusks and have adapted well to the wild. The Eurasian type (also called Russian Boar) was originally introduced into Texas for hunting purposes starting in the 1930’s. Russian boars have phenomenal strength, razor sharp tusks and typically support a very bad attitude and can weigh up to 600 pounds with even larger ones reported. The combinations of the two varieties have turned into a pig epidemic.

Wild hogs can breed as early as 5 months of age, usually having 1 to 2 litters a year with 3 to 13 piglets per litter. They have no real natural enemies other than man, which when doing the math sets up for explosive growth. With 1 to 4 million hogs in Texas and a population growth rate of 18 to 20 percent per year, the population could double every five years. 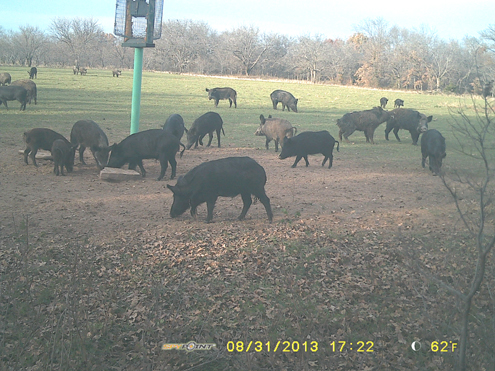 Wild hogs do an estimated $58 million dollars worth of damage in Texas alone and possibly over $1 billion nationwide. Rooting their way through pastures, destroying crops and causing havoc everywhere they go. They also compete with deer for food, eating acorns, corn, plowing through food plots, crops and eating everything a deer eats and more. Speaking of this, I was on a bow hunt in central Texas a few years back and shot a deer. My arrow hit the buck a little high and so I decided to stay in the blind and let the buck expire. Although I could not see the buck I had a good idea of where he had gone down. About ten minutes after I shot the buck a group of small feral hogs started working my way. I noticed as the hogs hit the area I shot the buck, they changed direction and headed toward my buck. Curious, I got out of my stand and walked around the trees in the direction of my downed buck. I was shocked to see the hogs on top of my buck eating him while he was still alive. I moved toward them and they were extremely reluctant to leave, until I got within yards of them. These hogs were only in the 25 to 35 pound range, so think what a large boar could do.

There is no easy solution to controlling these chubby eating machines but hunting and trapping can at least keep their numbers in check. I really do enjoy hunting wild hogs. I have a standard rule to shoot every hog I see while bowhunting. I figure all the deer are going to run when they see hogs so I might as well let the arrows fly.

Although I do a lot of stand hunting in the fall, my favorite way to hunt the critters is spot and stalk. I particularly like this approach from February through turkey season. It is a change from stand hunting and is a completely different challenge and besides, I need the exercise after sitting in stands all fall and winter. It is also great time of year to combine shed hunting with a little hog whacking. Just be sure to wear a good pair of boots. I recommend LOWA hunting boots. These are some of the most comfortable, lightweight and yet sturdy boots I have found. They are extremely rugged and perform well in hunting and hiking type activities. I have really been impressed with their durability as well. Trust me that a good pair of boots will make a huge difference whether you are hog hunting, shed hunting or just doing a lot of walking.

Wild hogs are extremely intelligent animals and rank fourth in the intelligence ranking only behind, humans, apes and dolphins. They have a superior sense of smell, poor eye sight and just average hearing. The key to stalking hogs is to keep the wind in your face. If you play the wind correctly, it is rather easy to get within bow range. Play the wind wrong and you will think there are no hogs in the county. If you hunt in hog country, notice what a hog does when he walks up to your trail you walked in on. Even if wearing rubber boots and hours later, hogs will immediately stop and go the other direction. Don’t underestimate their sense of smell and intelligence.

A strategy I like to use is to keep a few feeding stations active after deer season which will typically keep the hogs concentrated to some general areas. I use In Sights Wildlife Nutrition products during deer season as well as after for hogs. My favorite products are Buck Draw for deer which is a highly nutritious peanut based product that is high in proteins and carbohydrates and the deer crave it. For hogs, I use Hog Nut and Hog Trap, also from In Sights Wildlife Nutrition solutions. Hog-Nut is a peanut and grain based supplement and attractant that can be poured on the ground. It drives hogs crazy! I also use Hog Trap which is a sweet syrup that can be poured over Hog-Nut or straight on the ground. This product is irresistible to porkers and varmints. I like to use these products around feeders after deer season or just pour on the ground in areas that I can get into with a stalk. These products concentrate my hogs into areas on the ranch where I can consistently get into them most any time of day. You can also use Hog-Nut and Hog-Trap in traps as well.

Other than your bow and normal archery equipment, I recommend a broadhead that gives you bone busting and large exit wound capabilities like the new Toxic Broadheads by Flying Arrow Archery. Hogs can carry a wall of fat an inch to inch and a half thick and large boars have an armor like plate on their sides and unless you get complete pass through with a large exit wound will not leave much blood on the ground.

As deer season wraps up, keep a few feed stations going with Hog Get or similar solution that will keep the hogs concentrated. This is a great time to be in woods. I try really hard during deer season not disrupt our deer herd but once the season is over I recommend using this time to do some scouting, find some sheds and keep your hog population in check, all at the same time.

Keep your archery skills sharp, Get some exercise and keep the wind in your face. I think you will see why I like to spot and stalk hogs so much.

For the best in wildlife feed supplements and attractants for deer, hogs, bear and turkey please go to: In Sights Nutrition

For the newest designs in modern broadheads be sure and go to: Flying Arrow Archery