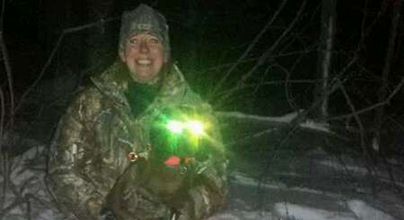 It was Christmas Eve day and the wind was finally right to sit my new spot. It was a whopping 8 degrees out with winds out of the South West and wind chills below zero. I had hunted a lot early season and never once had a shooter buck within range but I finally had a nice 8 point buck coming in regularly on camera. This could be my chance to finally get one within range this season. It was a new spot and my stand was tucked nicely in a pine tree with lots of cover from the surrounding pines.

After dressing with multiple layers including a heated vest and a pocket full of hand warmers, I went out to bait and sit hoping to see the 8 point. After only 15 minutes, I heard deer approaching through the crusted snow. I slowly grabbed my Bowtech Insanity. My arrow was tipped with the Dead Ringer Stiletto Rampage 2 blade broadhead and I got ready to take my shot. Could it be this easy? He came in quartering toward me and began to eat. I had no shot.

Another deer came in and he turned enough to give me a broadside shot. I pulled back and as I did, the sleeve of my jacket made just enough noise to spook the deer off. It continues to amaze me the movements and sounds you can make early season and not spook the deer. Then late season comes and it seems the snow covered pine limbs just amplify the sounds made. I was so disappointed. The buck was gone and I figured I wouldn’t see him ever again.

I talked myself into staying in the tree. I thought maybe for some crazy reason the 8 point wasn’t spooked too bad and maybe, just maybe, he might come back. After about a half hour 2 does and 2 fawns came in. As they began to eat, I heard another deer making its way through the pines. It was the 8 point. He worked his way to the bait, chasing the other deer off. I watched him start eating again hoping he would settle in and I could get a shot. The does started to approach him and as they did he moved into position to give me a shot. With my hands freezing I again attempted to pull back. Just like that the does spooked and they all ran off. Once again, I let my bow back down and sat in the stand completely frustrated. That was it. Should I just give up?

I sat in the stand trying to warm my hands and trying not shiver and thinking maybe I should just go home now. But then, only after maybe 10 minutes from when the deer spooked, a 6 point buck made his way in. Then I heard more deer making their way in. As I watched the area grow in deer numbers I saw a large deer jump thru the trees and chase a doe off. There was my 8 point once again. I couldn’t believe it, he had come back again. He must have only gone so far and when the other deer moved in too close to ‘his’ bait he just couldn’t resist the temptation. He had to chase everyone else off. This time I pulled back while the deer where all moving around so the sound of their hooves in the snow would hopefully cover any sound made by my clothes when I pulled back. I came to full draw and as I shivered, tried to settle in to take a shot. Thwack! I watch the arrow hit the buck and he took off. I was shaking all over but not from the cold. This shaking was that wonderful thing called buck fever. I had made a good shot and I still couldn’t believe he gave me the chance after running him off twice. Third time’s a charm I guess.

I made my way down from the stand and went to check for blood. Even with only an entrance wound The Dead Ringer Stiletto Rampage 2 blade had opened the deer up and left a good blood trail. I went home to get our young hound that we had been training for recovering deer. There was plenty of blood to track the deer but this would be one of her first tracks in the snow and she could use the work. We brought her to the start of the trail and she started slowly to work the track. It didn’t take long and she pulled me through the woods and led me to the buck. What a great feeling? It is so much fun to see my pup that we have spent so much time into track this well. The night was a complete success, I finally got my buck and it was a very Merry Christmas indeed.

Africa-Third Times is a Charm - Part1