by Joel Harris
in Bowhunting Posts
0 0
A A
0 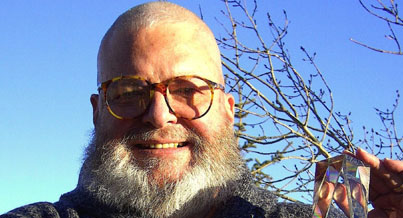 The award was presented on January 14, 2014, at the company’s annual writers’ event during the SHOT Show in Las Vegas. In honor of his contributions to outdoor writing and to the hunting and outdoor sports, McIntyre received a customized crystal accolade and a premium ZEISS product of his choice.

Established in 2003, the Carl Zeiss Outdoor Writer of the Year Award marks its 10th the award recognizes an outstanding outdoor writer who has achieved excellence in outdoor communications, has made significant contributions to the hunting and outdoor industry, and is an active supporter of wildlife conservation. McIntyre joins a Who’s Who list of outdoor writers who have positively shaped and informed the public about hunting and outdoor sports experiences and issues.

“Tom is an extremely talented writer, author and champion of the outdoors,” said Michael A. Jensen, President of Carl Zeiss Sports Optics. “He masterfully communicates the experience of the hunt with colorful insight along with accurate and in-depth technical information that increases the knowledge and understanding of his many, many fans. His passion and appreciation for the outdoors combined with 37 years of seeking writing excellence make Tom the perfect choice for this year’s Outdoor Writer of the Year award.”

Since 1976, McIntyre, a resident of Sheridan, Wyo., has distinguished himself in several areas of the outdoor writing industry. As a magazine and newspaper writer, McIntyre has had hundreds of articles published by Sports Afield, Field & Stream, Gray’s Sporting Journal, Petersen’s Hunting, American Hunter, Men’s Journal, Outdoor Life, Bugle, Sporting Classics, Fly Rod & Reel, Wyoming Wildlife, Texas Sporting Journal, The Hunting Report, Garden & Gun, and The Field in England. He has been the co-winner of Best Magazine Story for Best Sports Stories, awarded by The Sporting News. McIntyre also writes a column about hunting for The Sheridan Press.

As a book author, McIntyre has penned several critically acclaimed books, novels and anthologies, including: “Days Afield,” “Dreaming the Lion,” “Seasons & Days,” “Shooter’s Bible Guide to Optics (2012),” and “The Snow Leopard’s Tale.” He also served as the editor of, and contributor to, the outdoor-story anthology “Wild and Fair,” featuring Pulitzer Prize winners David Mamet and Philip Caputo. Currently, McIntyre is working on a novel about the African explorer Henry Morton Stanley.

And as a screenwriter, McIntyre has written scripts for more than 750 episodes of outdoor television programs for Orion Entertainment, including “Buccaneers & Bones,” which was narrated by Tom Brokaw, and the documentary, “Wyoming: Predators, Prey, and People” for the Wyoming Game & Fish Department.

“You need only to read one line of a McIntyre story to know instantly who wrote it,” said Anthony Licata, Editorial Director for Field & Stream. “Tom’s prose is an astounding blend of comprehensive technical knowledge, keen intelligence, biting wit, and deep pathos. He offers one of the most interesting and original voices in the sporting press.”

The Carl Zeiss Group is an international leader in the fields of optics and optoelectronics. In fiscal year 2011-2012 the company’s approximately 24,000 employees generated revenue of nearly 4.2 billion euros (approximately US$5.6 billion). In the markets for Industrial Solutions, Research Solutions, Medical

Technology and Consumer Optics, Carl Zeiss has contributed to technological progress for more than 160 years and enhances the quality of life of many people around the globe.

The Carl Zeiss Group develops and produces planetariums, eyeglass lenses, camera and cine lenses and binoculars as well as solutions for biomedical research, medical technology and the semiconductor, automotive and mechanical engineering industries. Carl Zeiss is located in more than 40 countries around the globe with about 40 production facilities, over 50 sales and service locations, and approximately 20 research and development sites. Carl Zeiss AG is fully owned by the Carl Zeiss Stiftung (Carl Zeiss Foundation).

Founded in 1846 in Jena, the company is headquartered in Oberkochen, Germany.